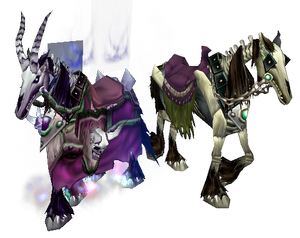 Skeletal horses are the remains of horses that have succumbed to the Lich King's plague. They have since been raised from the dead by the Royal Apothecary Society in the Undercity and are now used as mounts by the Undead.

Prior to the coming of the Scourge, skeletal horses were raised by the death knights of the Old Horde to serve as their mounts.

Not even the noble steeds that succumbed to the Plague are allowed any rest in the hands of the Forsaken. Through an arcane mix of alchemy and necromancy, the Royal Apothecary Society has raised numerous fallen steeds to serve as mounts for the vengeful dead. These undead steeds are as strong as they were in life, and far more resilient. An unfortunate characteristic, however — one that the Forsaken are none too enamored with is the steeds almost universal stubbornness. From death and beyond, the mighty steeds still cling to the willful spirit that served them in life.[1]

Skeletal horses can be purchased from the stable in Brill. They come in [black], [red], [blue], and [brown colors], and require a riding skill of 75.

Epic skeletal horses are sold at the stable in Brill. They look very similar to the death knight mount from Warcraft III. Purchasable colors are [purple], [ochre] and [green]. The epic PvP mount is the [Red Skeletal Warhorse]. The purple, green, ochre, and red warhorses require a riding skill of 150. A famous epic skeletal horse is [Rivendare's Deathcharger], a very rare drop from

At the Argent Tournament Grounds, a [white] version is sold for 500