Varies according to species

Skeletons are mindless undead created through necromancy. Most skeletons are raised from battlefields and thus are often seen still clothed in rotting garments and rusting armor. Some skeletons still fight with the weapons they died clutching. Others, specifically created only by the most advanced necromancers, are able to cast magical spells. Whatever they attack with, skeletons are basically mindless automatons who are either directly controlled, or made to follow a specific order from their creator. If sufficiently damaged, the magic holding their bones together will dissipate, and they will crumple lifelessly to the ground. Some skeletons, however, actually seem to possess some kind of intelligence, like Mordresh Fire Eye found in Razorfen Downs. He can be seen talking to and encouraging his brethren, holding a speech about how the undead Scourge will consume the whole of Kalimdor. Another skeleton who has retained his full human consciousness is Devlin Agamand. Skeletons are exclusively male.

A strange darkness has recently engulfed the region of Duskwood, bringing out skeletons and other undead creatures from deep within the shadows. While gangly and seemingly frail, the skeletons possess superhuman strength and are highly resistant to most physical attacks. Though it is unclear whom the Skeletons work for or whether they serve a greater purpose at all, it is alarmingly clear that they seek to destroy anything in their paths.[3] 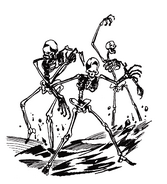 Skeletons from Warcraft I.