This article is about the kingdom known as Stormwind. For other uses, see Stormwind.

The Kingdom of Stormwind[4] (also called Kingdom of Azeroth Stormwind Regal Azeroth Regal [5]) is a human kingdom,[6][7] nation[8][9][10] and country[11] on the southern continent of the Eastern Kingdoms, Azeroth - with its capital at Stormwind City.[3] Originally settled by descendants of the Arathi,[12] Stormwind flourished until the First War when it was conquered and laid waste by the Orcish Horde. The survivors of that conflict, led by Anduin Lothar, sought refuge in Lordaeron, but were able to reclaim their homeland at the end of the Second War with the aid of the Alliance of Lordaeron.[13]

Stormwind is ruled by the House of Wrynn from their court at Stormwind Keep. Presently, the throne is occupied by King Anduin Wrynn - son of Varian Wrynn, who sacrificed himself to cover the withdrawal of Alliance members during the Assault of the Broken Shore. Also aiding in the governing of Stormwind is the House of Nobles, an executive branch of Stormwind's government who currently aids King Anduin in Stormwind, during the difficult times the Alliance face now.

Stormwind's control and influence now reaches across all of the continent of Azeroth but it is unknown if Stranglethorn Vale falls under its jurisdiction due to the multitudes of other factions each having some sort of claim to the land.

The nation of Stormwind was originally founded 1,200 years before the First War by the descendants of the Arathi bloodline, who had migrated south from the nation of Arathor.[14] It had a long and peaceful history, with the king served loyally by the knights of the Brotherhood of the Horse and the clerics of the Holy Order of Northshire Clerics. Prior to the First War, the Wrynn dynasty ruled over the entire kingdom.

Azeroth's idyllic existence was shattered with the opening of the Dark Portal and the invasion of the Orcish Horde. After a long and bloody war, which cost the lives of both King Wrynn III and his son King Llane Wrynn, the orcs overran the entire kingdom, forcing the survivors to flee to the shores of Lordaeron. Anduin Lothar became regent lord, guiding the refugee nation in the name of the young Varian Wrynn.

Stormwind was the first kingdom invaded by the Horde during the First War. Beloved King Llane was killed in the attacks, and it was in his name that Sir Lothar led the Alliance forces to take the city back. With Stormwind under its control once again and serving as a strong base of operations, the Alliance eventually wrested most of Azeroth from the Horde's grip. The Alliance set to rebuilding, calling on whoever could spare artisans. Stormwind City was later rebuilt as New Stormwind after the Second War. Afterwards, the nation was split into several regions. The city became the capital of the kingdom of Stormwind.[15] (LoC 52) Most of Azeroth's former regions became separate democratic regions, but still influenced or controlled by the kingdom of Stormwind — with the exception of Westfall, which has fallen under anarchy, and is controlled by the Defias Brotherhood.

Now it holds one of the few remaining great human cities. It boasts a powerful city guard and a strong army, and it is a base of magical/divine study and contemplation in Azeroth.[7]

With the fall of the northern kingdoms, Stormwind is by far the most populated city in the world. Boasting a population of two-hundred thousand people (predominantly human), it serves in many ways as the cultural and trade center of the Alliance, even with remote access to the sea. The humans living in the city are generally carefree and artistic, favoring light and colorful clothes, cuisine, and art.

However, the people of Stormwind find it difficult to accept Theramore's role as the home of the eastern Alliance, convinced not only that Stormwind should be the legitimate heir of Lordaeron's role in the past, but also that Theramore is doing little against the worsening situation within the Eastern Kingdoms.

Background: Before the coming of the Age of Chaos when the Portal was first opened, the kingdom of Azeroth was the mightiest of all Human nations. Ruled by the wise and just King Llane, Azeroth stood as a beacon of light and truth throughout the known world. After the First War, Azeroth and all of its lands were devastated by the Horde. With King Llane dead, Sir Lothar took charge of the shattered armies of Azeroth and led the survivors across the Great Sea to the shores of Lordaeron. King Terenas, ruler of Lordaeron, agreed to support the landless Azerothiens. The people of Azeroth settled near the Southshore region of Lordaeron, pledging their loyalty to the Alliance. Battle-hardened and brave, the last of the once great armies of Azeroth now seek retribution for the loss of their homeland.[16] (W2Man )

Territory and outposts of Stormwind

Following the victory of the Alliance of Lordaeron over the Horde, Stormwind was reclaimed and rebuilt as New Stormwind. The kingdom is currently split into several smaller territories, including the region of Stormwind.[17]

During the absence of King Varian Wrynn, co-regent Lady Katrana Prestor managed to sow discord among the various regions of Azeroth. In World of Warcraft, her true identity is revealed and her hold over Highlord Bolvar Fordragon is broken. With Varian's return during the time of the war against the Lich King, the grand kingdom began to re-build with the threat of the Defias Brotherhood over and the many other problems that plagued the other territories slowly began to get back on top of things and maintain order. The region of Westfall seemed to officially re-join the Kingdom with the aid that was sent.

However this brief moment of progress was interrupted with the end of the war in Northrend and the recent Cataclysm that broke the world. The Kingdom now faces a more economical issue as the recent war now mounted with the Alliance–Horde War (Cataclysm) has seriously damaged the kingdoms economy. Many have become homeless and evicted forced to find work and a place to live. On the other hand the Kingdom itself has grown too.

Note: References below represent a period of time prior to the return of King Varian Wrynn. The current situation in Azeroth is now different. 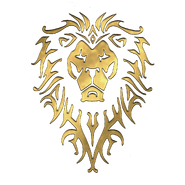