This article is about the building known as Stormwind Keep. For other uses, see Stormwind.

The mighty Stormwind Keep[1][2] (also called Stonewind Keep,[3] Castle Stormwind,[4] stronghold of Stormwind,[5] Stormwind Castle.[6] Stormwind castle,[7] and after its reconstruction is sometimes referred as Castle of Stormwind Regal Regal Stormwind Castle of New Stormwind[8][9]) is the seat of power in human lands. It is here that King Anduin Wrynn resides, moving into the role following the death of his father, Varian Wrynn. The keep (or castle)[10] (LG 129, 133, 141, 148, 166, 186, 192) is also the location of an extensive Royal Library where nobles and scholars from across the known world research various topics. Whispers of corruption and infiltration among the higher echelons of Stormwind power have recently arisen, although none dare speak too loudly of these accusations for fear of imprisonment. There are a number of Stormwind Royal Guards stationed within the halls.

This mighty keep sits watch over Stormwind atop the cliffs north of the city. It houses the king himself and many of the city’s nobles. It was designed with the thought of another invasion in mind. If the city began to fall to an army quickly, the keep itself would become a means of escape, with several secret tunnels entombed deep within the rock.[11] (LoC 54)

Stormwind Keep was entirely remodeled, both inside and out. The path leading to throne room is now open air and redesigned, complete with a grand walkway and a fountain. The throne room has been redesigned and the garden area before the Library now has a view overlooking a lake. Genn Greymane was also added to Stormwind Keep after the fall of Gilneas.[12]

During the Cataclysm, Major Samuelson, who has a presence near the throne based on his assignment to investigate Twilight's Hammer clan activities in Stormwind, is actually a Twilight cult leader and may have participated in bringing Twilight cultists into the city. Anduin Wrynn goes to investigate the situation with the help of an adventurer.

Legion, the Keep is under attack from the retreat of Broken Isles by the Legion invasion forces.

To get to Stormwind Keep, you can head north from Old Town or east from the Dwarven District. The gates are located at the northeastern end of The Canals between the two districts.

Stormwind Keep in World of Warcraft

Stormwind Keep before the Cataclysm 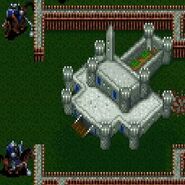 Stormwind Keep being guarded during the First War.

Stormwind Keep before its destruction in the First War.