Near the road south of Raven Hill, Duskwood

Sven Yorgen is a quest-giver (lvl. 20) located near the road south of Raven Hill,

Duskwood. Before the Cataclysm, he had a small camp

on the northern edge of The Hushed Bank.

He and his family once owned the Yorgen Farmstead, but whilst he was out one day, Dark Riders appeared looking for the Scythe of Elune and killed his wife and children. Sven now spends the rest of his days trying to survive in the wilderness with his companion Lars. He seeks to find the identity of a shadowy figure he spotted at his farm, which is actually Jitters.

Cataclysm, Sven is infected with the worgen curse. He argues, blames and even threatens Jitters for all that has happened to himself, but he doesn't go into details why Jitters is the cause. Instead, he sends adventurers out to find out what happened with Morbent Fel.

He started the following quests:

Sven as a human, prior to the Cataclysm 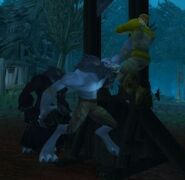