Talador is the heart of Draenor. It rests at the crossroads of the continent, divided by rivers that flow from the Sea of Zangar and enable marine trade and movement from east to west. At the center of Talador shines the glorious cathedral city of Shattrath: a museum metropolis, an architectural marvel, a preserved recreation of ancient draenei culture—entirely occupied by the Iron Horde.

Talador is a new zone introduced with

Warlords of Draenor located in the southern central part of the main Draenor continent. It is a draenei zone that would have become Terokkar Forest in the original timeline. It will have an autumn theme, similar to the Vale of Eternal Blossoms before its destruction.

Shattrath City is found here, though is much larger in scope than what is known today, spreading deep into the zone and resting on the edge of the Zangar Sea. Auchindounn, pre-shattering, is also here as well.

Located in the heart of Draenor, Talador offers significant strategic value to the Iron Horde should they complete their quest to gain control. The city of Shattrath, a shining jewel of draenei civilization, now lies in the Iron Horde’s clutches, and the situation is looking grim.

After coming out of a major confrontation against the Iron Horde in Gorgrond and leaving one of their bases in ruin, the Alliance began erecting an outpost just north of the draenei city of Tuurem in a bid to push back the invading fleet. Under the command of the ruthless Warlord Blackhand the Destroyer, the Iron Horde has already made landfall on the Orunai Coast and have taken most of northern Talador — including the sprawling city of Shattrath, the trade capital for all of draenei civilization. If they aren’t stopped soon, all of Talador will fall into Grommash Hellscream’s grip, and the rest of Draenor is sure to follow. Talador’s strategic location at the heart of Draenor would give the Iron Horde the perfect launching point for their amassing forces in Tanaan Jungle.

Even if the Iron Horde is routed out of Shattrath, the city will not remain safe for long, as new foes are waiting to emerge and lay claim to the city...

The Sargerai are a sect of draenei who have aligned themselves with the Shadow Council to usher Gul’dan’s twisted schemes into fruition. With most draenei cities razed and sacked by the Iron Horde, allies are few and far between . . . but they do exist. Pockets of draenei resistance dot Talador’s forests, eager to retake their homes and enact vengeance on their assailants. In an ancient caldera to the east at a major ley line nexus, Archmage Khadgar and the Kirin Tor have taken up residence. Perhaps most curiously, there have been several sightings near the city of Aruuna of arakkoa outcasts — flightless bird-men powerful in the ways of shadow magic.

Teron'gor, right hand of Gul’dan, leads a massive assault in the south on the holy mausoleum of Auchindoun, resting place for all draenei souls. Demons pour in at the Burning Front from the remains of a ruined world somewhere in the Twisting Nether. The Shadow Council eyes the city of Telmor. Exarch Maladaar leads the Auchenai, ancient defenders of Auchindoun, in a desperate effort to hold off the seemingly endless waves of death. If their lines falter, Teron’gor will have unhindered access to innumerable draenei souls... and plans to consume them to gain a terrible power not meant for mortal hands. But the Auchenai have an ally that Teron’gor did not expect. Lady Liadrin and her Sunsworn felt the demonic presence and have flocked to Auchindoun’s aid.

Talador is home to the heart of draenei civilization. It is stunningly beautiful, and the zone has a palette of oranges, golds, and greens that make it incredibly vibrant.

It’s particularly lovely at dusk and into the evening, where its gentle orange sky fades into a dazzling starry night. The zone showcases the breadth of draenei life: the sprawling trade hub of Shattrath, the massive mausoleum that is Auchindoun, the iconic city of Tuurem, the mythical Telmor, and so many others. Talador is more than a pretty place, though, and there is a prevailing sense of urgency felt everywhere. Talador also boasts great contrasts everywhere: old versus new, tranquil versus literally on fire.

Many creatures have adapted unique hunting techniques to survive. The devious stalker is able to change its skin coloration to camouflage it, allowing it to ambush prey or escape predators unseen. Mighty teroclaws, flying beasts that use their strong beaks to sever both flesh and bone, rule the skies here rather than the rylaks found in many of Draenor’s other locales. Moths are drawn to the plentiful water sources, and have developed the ability to channel the abundant magic energy in the air around them into condensed blasts. Those same water sources are home to all sorts of electric eels, poison frogs, and even mighty river beasts. Some caves are home to ferocious territorial spiders that few dare disturb - their venom is said to be able to alter both the body and mind. Tigers prowl the lower mountain ridges, hungry for their next kill. Talador looks like a welcoming place . . . but every forest has its dark side. 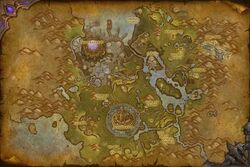 Talador offers some truly diverse locations that are all worth a visit.

Shattrath is initially occupied by the Iron Horde and is exponentially larger than the Shattrath players know from The Burning Crusade. Carefully manicured trees and hedges lines its walkways, and numerous rises, canals, and bridges connect several large, unique sections of the city. One section is protected and cordoned off by an ornate, magically enhanced shell structure. Nearby, Shattrath’s docks offer ample room for traders from all across Draenor to come peddle their wares—or for an Iron Horde war fleet to bring their ships. Those who prefer to live a quieter lifestyle outside of the hustle and bustle of the big city may find themselves in Tuurem or a village along the Orunai Coast.

Auchindoun has not yet been sullied by the Shadow Council, and players will have a chance to see it in all its glory. Draenei from all around make pilgrimages there to pay their respects to their ancestors and the recently deceased. The northeastern forest may not have an enormous city dominating its horizon, but it is far from short on sights worth seeing. Player Garrison outposts stand tall in an ideal position for accessing the whole of Talador, wherever their presence is needed.