WoWWiki
Register
Don't have an account?
Sign In
Advertisement
in: Articles needing citations, Taunka, Wrath of the Lich King,
and 4 more
English

Unknown, possibly a variation of Taur-ahe

The taunka (a.k.a. winter tauren)[1], ancient relatives of the tauren, were thought to be lost until re-discovered by Garrosh Hellscream and his orc forces upon their arrival to Northrend.[2] "Like their ancestral relations the Tauren, the Taunka are a hardy people who have given their allegiance to the Horde."

A travel hub has been set up between orcish fortress of Warsong Hold, Taunka'le Village, and Camp Winterhoof.

They, like their distant cousins the tauren, are involved with the spirits of the land, though after living for so long in such a harsh environment as Northrend they tend to bully the elements rather than ask them to keep their region inhabitable.

WorldOfWarcraft.com Wrath of the Lich King—Bestiary:

This tenacious, stoic race knows all too well the rigors of living in the harsh and often deadly wastes of Northrend. Over time, the taunka—whom many believe to be ancestral cousins of the tauren—have adapted, but only by forcing the land and the elements to yield to their will. The taunka's relationship with nature, unlike that of their tauren brethren, has been one of constant struggle and grim perseverance.

Although the taunka may seem dour or even cold to outsiders, those who come to know them will soon recognize an embattled race of survivors characterized by colossal hearts and unshakable resolve.

Although they appear similar to the tauren, they resemble bison more than cattle.

Female taunka share the same model as that as the regular female tauren, but males have a different facial model to the male tauren.

Most of the taunka camps are either destroyed, evacuating, or planning to evacuate. The only two exceptions to this are currently Oneqwah and Tunka'lo. Oneqwah is where the Camp Winterhoof taunka are evacuating to.

The name "taunka" likely comes from the word "tatanka", the Lakota word for bison. 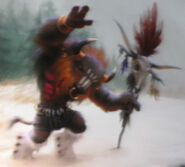 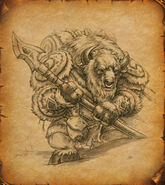 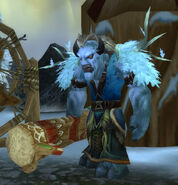 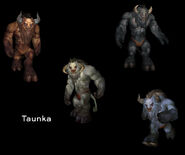 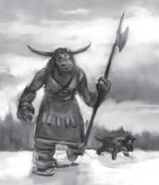 Breadcrumb to Camp Winterhoof, you may only complete one...

While attacking Skorn, find a drop that begins:

While Dealing With Gjalerbron, find a drop that begins: