Avatar of Hakkar, Shade of Eranikus

Temple of Atal'Hakkar (also known as Sunken Temple and more rarely, Lost Temple) is a shrine erected by the Atal'ai trolls, led by their master Jammal'an the Prophet, to the nefarious Blood God — Hakkar the Soulflayer. Believing that this was the intended site for Hakkar's reentry into Azeroth, the great Dragon Aspect, Ysera, and her green dragonflight sunk the temple into the depths of the Swamp of Sorrows...but the dragons did not realize that it was the wrong location until it was too late.

Many of the bosses in the instance have some kind of prerequisite in order to encounter them. Atal'alarion will appear after activation of statues, Jammal'an the Prophet can only be reached by killing the 6 troll mini-bosses, Avatar of Hakkar must be summoned and the Shade of Eranikus will only be killable after the death of the Prophet.

The name Atal’Hakkar can mean either "Devoted to Hakkar" or "In Honor of Hakkar" in Zandali, the language of the trolls.[1]

Outside the Temple of Atal'Hakkar 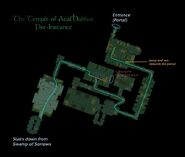 Instance entrance before and after Cataclysm 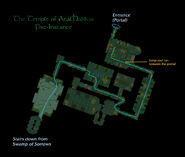 A very detailed map of Temple of Atal'Hakkar before Cataclysm

The Sunken Temple was raised to a level 50-60 dungeon in Cataclysm.

A good group to have for this instance would consist of a tank, a healer, and three damage dealers, preferably one with good AoE. AoE's are very helpful, as there are many packs with non-elites. The instance offers a lot of opportunity for crowd control (specifically rogue saps and Priest shackle undeads, and magic dispels (from priests, paladins, and Resto shamans) make it a lot easier, as there a various negative effects (Fear and Sleep being the most dangerous). One of the three damage dealers should be able to tank, or have a pet that can tank, for the Shade of Eranikus fight.

Each class brings something useful to this instance, and as much depends on player skill and character levels as does group composition. That said, it's very nice to have reliable Crowd Control, good healing from a suitably geared and/or spec'd healer, as well as some form of out of combat Resurrection and Wipe Recovery.

One of the most important things to bring to this instance is knowledge of the layout or a good guide/map, as it's very easy to get lost here!