Were you looking for the possible future scenario of the same name, called Temple of Kotmogu?

Four artifacts[5] (originally a single artifact) called Orbs of Power sit upon pillars in the middle of a large temple grounds. When a player picks up an Orb, they will grow larger, deal more damage, and start earning points for their team. Players holding Orbs also get a stacking debuff that causes them to take increasingly more damage the longer they hold onto the Orb. The map is broken into three zones: an inner courtyard where you earn 5 points per tick, a plaza area that earns you 3 points per tick, and the rest of the zone, which is temple grounds and grassy terrain, earns you 1 point per tick. The damage debuff stacks per team, not per player, so you can't just toss the Orb back and forth to negate the damage debuff.[2] 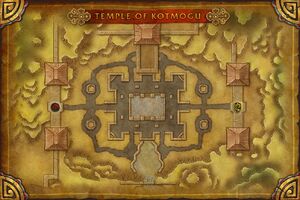 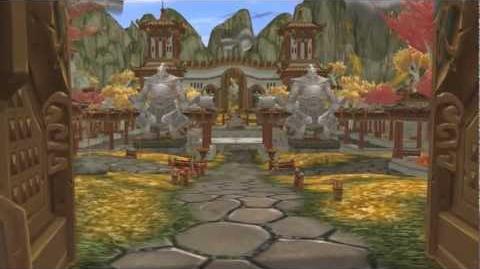 Wowhead News Battlegrounds Preview: Temple of Kotmogu and Silvershard Mines by perculia 2012/10/08 11:27 AM

MMO-Champion Silvershard Mine and Temple of Kotmogu Preview, Blue Posts, The Daily Blink by chaud 2012-06-07 06:02 AM