WoWWiki
Register
Don't have an account?
Sign In
Advertisement
in: Feast of Winter Veil, Level ?? NPCs, Quests that have changed,
and 4 more
English

. He only appears during the height of winter and probably lives on a seasonal hibernation cycle. When he does appear, however, he must satiate a savage hunger and constantly scrounges for food. He is known to attack travelers passing through the mountains, taking their entire food supply. Since the employees of Smokywood Pastures make use of the mountain routes to transport their goods, they are often hindered by the Greench's annual awakening and lose some amount of their rations to his voracious appetite.

As of 2011, he is now the objective of the Feast of Winter Veil daily quest below. He currently stays in front of his cave instead of roaming. Most the time he will die quickly due to masses of players of both factions swarming him each time he spawns.

Drops [Stolen Treats] for the quests:

He is a reference to the Grinch character from How the Grinch Stole Christmas!.

From the card game. 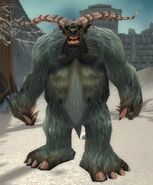