The Prince and the Prophet
Divergent Courses

The Culling is chapter 6 of The Scourge of Lordaeron. It was the slaughter of a large portion of the civilian population of Stratholme at the hands of Prince Arthas, who sought to prevent the spread of the Plague of Undeath at any cost necessary. This event also marked the (temporary) disbanding of the Silver Hand, as Uther the Lightbringer refused to follow the order of executing civilians. More importantly, the event marked Prince Arthas' first major step to becoming a death knight by slaughtering his own people.

As Arthas begins the massacre, the dreadlord Mal'Ganis appears and begins "collecting" those civilians who have already been transformed into mindless zombies (he teleports the zombies into the Twisting Nether for safe keeping). Mal'Ganis gloats that soon the people of Lordaeron will belong to the Scourge. Arthas refuses to let that happen and quickens his slaughter of the populace. The two sides proceed to ravage the city building by building. Finally, when most of the city is in ruins and its inhabitants either dead or converted, Arthas and Mal'Ganis confront each other face to face. Arthas demands that Mal'Ganis fight him here and now. Mal'Ganis, however, tells Arthas to gather his forces and come to Northrend. It is there that they will settle this conflict. Mal'Ganis then teleports away. Arthas vows to hunt Mal'Ganis "to the ends of the earth."

Heading left of your starting camp you will encounter a bandit camp (the bandits will be shadowmelded if it's night), kill the mobs then destroy the most westerly tent for a Tome of Strength +2. Filson the Rat can be found with the Wildkin Zoo Animals about halfway up the left side of the map. Attacking him will yield continuous misses, so to kill him you must keep clicking him until he explodes and drops a Talisman of Evasion.

Players are able to experience this event in the Caverns of Time: Culling of Stratholme in Wrath of the Lich King. 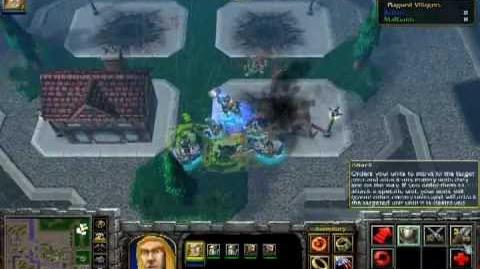