The Trade Princess Movement is an entirely fan and player powered movement to create a Female Trade Prince for the Bilgewater Cartel, the playable faction of goblins added in the expansion World of Warcraft: Cataclysm. It started as a thread on the World of Warcraft: Cataclysm forum back in January 2010 by the player Sarpa and was originally inspired by the forum’s MVP moderator Frejya. The movement grew in support from countless players, broke multiple post limits, had mountains of fan art and fiction created, and was one of longest-lived threads in the Cataclysm forums before they became read-only and ultimately deleted at the thread’s 391st page. Frejya herself has shown support for the idea. There is now a facebook group of over 400 members and an official RP guild called <For Her Tallest> on Wyrmrest Accord. It is the oldest and most likely the largest movement to overthrow Trade Prince Gallywix, with the movement pre-dating him altogether or any widespread knowledge of Trade Prince Maldy.

The first 100 pages of the original thread are now available for download here.

Her Tallest, The Trade Princess, Her Tallness

Originally nothing more than a vague concept, the once nameless female Trade Prince has now been well defined within the movement. There have been limitless ideas put forth, but these are the most important to the character players have already come to know and love. A quote from the original post says:

“The general consensus is that she be named Mida Silvertongue (Mida S. Golden touch, get it? ;) ), nicknamed Her Tallest (now Her Tallness) as Goblin leaders seem to often be a bit taller than the rest and as a nod to Invader Zim. She's a rogue, engineer, and could sell refrigerators to the Tuskarr. She also has a mutual platonic flirting thing going on with Vol'jin. She's clever, shrewd, and comical with a twisted sense of humor and an alchemical golden touch. A wild card.”

Many other characters have developed out of this thread. The first was Her Tallest’s administrative assistant and secretary. Taken from the original post:

“Her second in command has been named Bowie (now Kazit), as a nod to Labyrinth. He's her long suffering right hand man, lacky, secretary, and is a seemingly cool, collected alchemist fire mage with pyromaniac tendencies with fierce, unquestioning loyalty to Her Tallest. If ordered, he’d shoot himself in the foot for her. He is a bit disturbed by the Vol'jin thing. He’s always highly stressed, and no one really knows what goes on deep within that head of his.”

Her office is also one of the primary defining factors of Mida’s character, as seen in the original post:

“Her epic steampunk moving castle home includes a trap door laser shark tank in her office, a small legion of mechanical squirrels and clockwork shredders in business suits. Raids will require appointments (we all acknowledge that this one is a tad far-fetched, but we love it anyway).”

Other minor pieces of her character include:

The Trade Princess Movement began, and Mida Silvertongue was created, long before Trade Prince Gallywix had even been created by Blizzard Entertainment. We within the movement are well aware of the fact that Gallywix has been appointed Trade Prince by former Warchief Thrall. As Thrall himself says, however, he only made Gallywix Trade Prince “for now.” [1] An overwhelming majority of players that have experienced the goblin starting zone, and many who haven’t, now agree with what members of our movement have been saying for over a year and a half (though Gallywix was named Maldy when we first began objecting to him), which is the simple fact that Gallywix is a terrible, unfit leader. A larger list of offenses and grievances has been written (see By Decree of the Bilgewater), but in the goblin starting zone alone, Gallywix:

But perhaps most importantly, yet often overlooked, is the fact that Gallywix is only Trade Prince by the orders of FORMER Warchief Thrall. Warchief Hellscream has made no official appointment to Trade Prince or leader for the Bilgewater Cartel.

These things together, along with a growing distaste for him by characters and players, all seem to foreshadow his downfall as Trade Prince sometime in the future. This is now further indicated by the fact that he does not exist in game beyond the goblin starting zone, and further more by the fact that among his voice set is a quote that implies Gallywix is supposed to be inside the Gallywix Pleasure Palace, but for some reason Blizzard decided not to put him there.

On June 23rd, 2011, Blizzard posted its second “Ask Creative Development” answers. Among many was this question:

Ask Creative Development -- Round II Answers | 2011-06-23 10:42 | Bashiok
Q: Where is X? (X = Calia Menethil, Turalyon, Alleria Windrunner, Med'an, Gallywix, etc.) A: There are several "missing" characters in the Warcraft universe, but they are not forgotten! While we'd love to talk about these characters, doing so would spoil a number of the plots we have for Cataclysm and beyond. Believe us when we say that you will definitely hear about these characters when we're ready to talk about them!

Based on this answer, it would seem Blizzard Entertainment has plans for the story regarding Trade Prince Gallywix, and even talking about him could “spoil the plot.” Given everything we’ve seen thus far, and then this response directly from Blizzard, his removal from power seems virtually inevitable.

Her Tallest and Feminism

A very large portion of the support for this idea comes from those players that wish to see more females in positions of power and portrayed in more positive lights. Right now, many of the in-game female leaders either aren’t independent leaders (Jaina and Tyrande), are emotionally unstable and more resemble foils to their male partners (Tyrande and Malfurion, Jaina and Arthas, Sylvanas and Arthas) or play very much to sex appeal at the expense of characterization and involvement in the game. For more of the arguments of feminism, please visit our guild website or facebook group. We have had many in-depth conversations about proper female portrayal in-game and the consensus is that it could and needs to be drastically improved. Because of this, support has been overwhelming for a woman who is neither a stereotype nor sex symbol; but rather powerful, independent, very intelligent, witty, physically strong and an overall complex, fully-involved character with a highly active role in the storyline.

Mida has been put into the game as Boss Mida, <Her Tallness>, and is located in the Goblin Slums of Orgrimmar. Bowie, it seems, has been renamed Kazit. Three other goblins accompany Her Tallness in the slums; Kazit, Bruiser Janx, and Engineer Niff.

Her Tallness telling it how it is 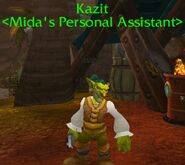 Kazit - the best assistant ever!

Engineer Niff
Add a image to this gallery

by Sarpa of Moon Guard

by Sarpa of Moon Guard

by Dziewanna of Wyrmrest Accord

by Ellemere of Scarlet Crusade

by Garde of Caelestrasz
Add a image to this gallery

Deneb-Vir.DeviantArt.com Silvertongue
This is the official story for Boss Mida Silvertongue, written by Denebvir of Thorium Brotherhood. It is a re-write of the original story that was written near the movement's inception, before the release of the Cataclysm Alpha NDA. The first several chapters have been re-written with up-to-date information and story (view Deneb Vir's gallery for the other chapters).

Deneb-Vir.DeviantArt.com Bilgewater, Part 1
The original story (with outdated information, such as Gallywix being named Maldy).

FanFiction.net Scheduling by Dziewanna of Wyrmrest Accord