WoWWiki
Register
Don't have an account?
Sign In
Advertisement
in: Articles to clean up, Level ?? NPCs, Bosses,
and 2 more

The Clash of Thunder

Thorim is one of the watchers boss encounters in Ulduar. The encounter has two phases, in the first, the raid has to split in a gauntlet and an arena team. The arena team must fight waves of adds while the gauntlet team makes its way through some trash and a few mini-bosses to Thorim. Upon reaching the boss, he and the gauntlet group join the arena team, starting the second phase which lasts until Thorim is subdued.

Both, fire and nature resistance are useful. When attempting hard mode, a little frost resistance gear is recommended.

These mobs aren't much of a threat - killing the healer (Acolyte) first is a good idea though.

The fight is started by killing the trash mobs in the Arena (healer first). Thorim casts Sheath of Lightning on himself, making him almost invulnerable. After the mobs are down, the lever next to the gate on the left becomes active. The raid should now split in two, one part goes down the hallway to reach Thorim, and the other part stays in the arena to fight waves of adds.

There are 3 groups of 3 Warbringers. They can be Crowd Controlled, (Polymorph in particular). Two mobs should be CC'd while the others are killed. At the end of the hallway is a large golem. In regular intervals it raises one arm and does damage to anyone on that side of the hallway, much like Skadi. A short time after it is engaged it gains a buff which decreases damage taken by 50%, so if using cooldowns it's best to use them early.

After defeating the golem, the door behind it opens and mobs start spawning on top of the stairs. Defeat or CC the two sets of two mobs already standing there and quickly run up. When the giant aggros, he buffs any adds still alive, but the adds stop spawning. The healers must have LOS to the tank but stand outside the giant's stomp. When the giant is positioned at the top of the stairs, the healer can stand about halfway down.

After the giant is defeated the gauntlet team runs towards Thorim and jumps down into the arena. Someone must use any ability on Thorim to make him join. While running the large circles on the ground must be avoided, they are traps which briefly stun players standing on them.

Those raid members which are positioned closest to Thorim gain initial aggro from all adds wich spawn.

A simple setup for the arena team is to stack up dead center in the room. This avoids getting hit by the charged orbs, and also greatly increases the effects of both, AoE healing and AoE damage. The disadvantage of this method is that it makes the raid more susceptible to Stormhammer - it's possible to just take Stormhammer, but the group can also try to quickly spread out when it hits.

The most dangerous mobs are the Dark Rune Champions which do a whirlwind attack. They need to be kept away from the main raid, and/or disarmed. The Evokers casts heals-over-time that heal for massive amounts and also cast magic damage shield that can be stolen by mages. Both are dispellable and need to be dispelled/stolen quickly. Wound poison helps to reduce the amount healed.

Once Thorim is activated, he jumps down into the Arena. The mob waves stop spawning. During the whole of Phase 2, Thorim gains an extra Lightning Charged buff every 10 seconds. This buff stack progressively increases damage and attack speed, it's in effect a passive enrage timer. From about 7 stacks on, healers and tanks need to use some CDs to survive, after about 15 buffs Thorim's melee hits can one-shot even the best geared tank.

After Thorim is in the arena, he needs to be picked up by the MT immediately. The raid should spread out to avoid extra damage from Thorims' chain lightning. Every time Thorim uses Unbalancing strike (which is every 15-20 seconds), tanks need to taunt him off each other. When Thorim uses Lightning Charge, small lightning balls come from a column. After a short time, that column deals large amounts of AoE damage in a 60 degrees angle, this damage may be enough to one-shot players after the third Lightning Charge.

If the gauntlet team reaches Thorim within 2:45 min (6:15 on Heroic) of killing the adds in the entrance, the illusion of Thorim's wife Sif joins the fight. Additionally, Thorim gets +43% health and +67% damage compared to Normal Mode (it is not only +30%/+40%, since the debuff Touch of Dominion being applied for Normal Mode reduces his stats by -30%/-40% from the Hard Mode values).

While the increased damage is not a large deal, the additional HP make the fight longer, which means a substantially higher stack of Lightning Charged.

In hard mode, Thorim's Chain lightning is very dangerous to melee, so it is advisable to form 2-3 melee camps more than 8 yards from each other around the boss, as with Kel'Thuzad at 60.

Sif herself is unattackable. She has four abilities which when chained together can kill raid members very quickly.

When Thorim is defeated 'Sif' reveals itself for what it is: an influence tentacle of Yogg-Saron.

Demoralizing Shout cuts the damage the tank receives from unbalancing strike by 40%.

Shadow priests can MC a Dark Rune Warbringer. Besides dealing high damage, they also give all nearby allies a permanent buff called "Aura of Celerity", increasing melee, ranged and spell haste by 20%, practically a permanent Bloodlust (also requirement for the achievement

Heroic: Who Needs Bloodlust?). When mind controlled, these mobs also do more DPS than most player characters.[1]

The following achievements are for the encounter's hard mode: 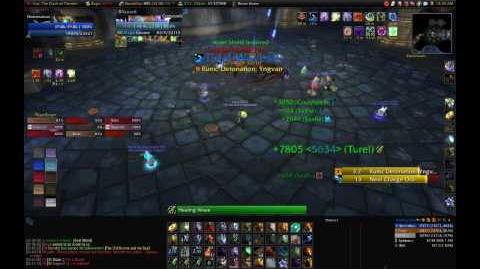 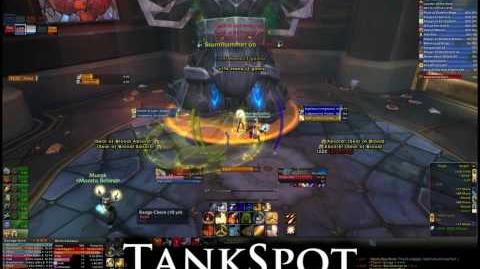 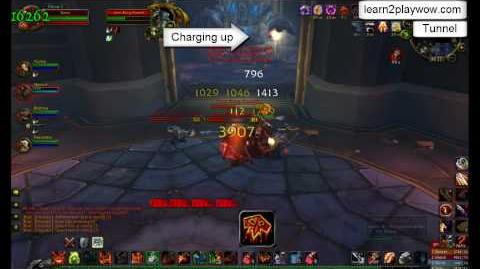 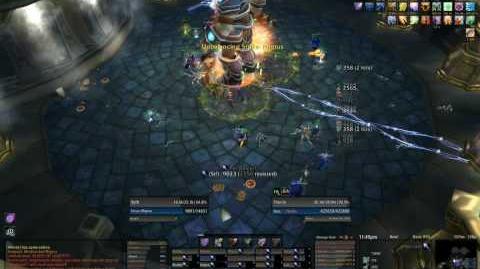 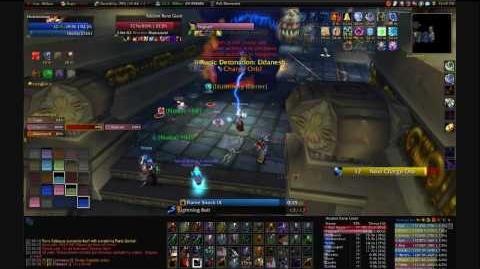 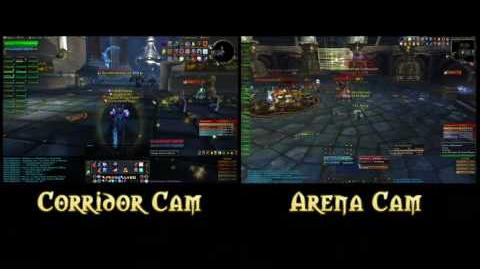 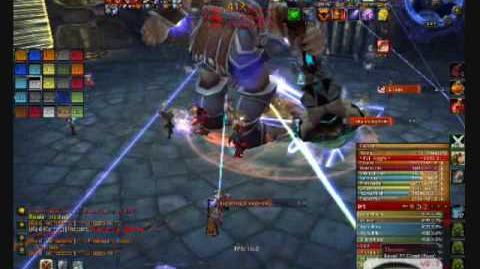 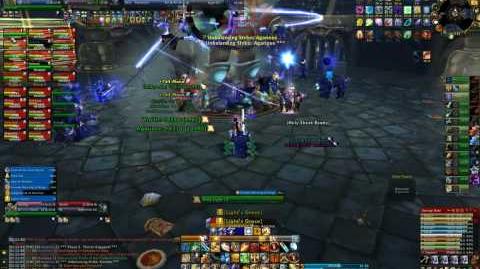 Wowraid Strategy guide for the Hard Mode of Thorim based on live boss kills.