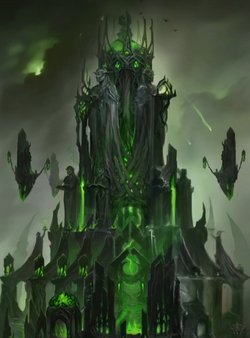 The term Tomb of Sargeras refers to the remnants of the Temple of Elune in the ancient Kaldorei city of Suramar (coincidentally, the same city in which Tyrande, Malfurion, and Illidan lived out their early years). This tomb was used by the Guardian Aegwynn to contain the Avatar of Sargeras which she defeated in mortal combat.

The tomb was sent to the bottom of the Great Sea by the Sundering, but was much later raised by Gul'dan who believed that the body of Sargeras contained the power to make him a god (it was in fact the promise of the Tomb of Sargeras that led Gul'dan to first open the Dark Portal). The warlock led his entire army, formed by the Stormreaver and Twilight's Hammer Clans, to the islands, thus taking away about a third of the Horde's entire standing forces. This action ultimately led to the Horde's defeat in Lordaeron. Gul'dan himself was later torn apart by the Tomb's Guardians, at the very threshold of the Eye Chamber (once the Courtyard of the Moon), and his armies destroyed by the enraged legions of Orgrim Doomhammer, who had been forced to break off their assault on Lordaeron in order to deal with Gul'dan's treachery.

Eventually, Teron Gorefiend sent one of his lieutenants, Ragnok, to accompany Tagar, Fenris and their warriors to the Tomb of Sargeras. Their mission was to locate and retrieve the Jeweled Scepter of Sargeras. Once inside the tomb, they were confronted by a demon, whom they prompty slew. The demon held the scepter, and it was recovered. It was then that Ragnok, the death knight, threatened the orcs with death if they did not help him retrieve the Eye of Sargeras. Fenris was adamant, however, and Ragnok was forced to reconsider his decision to venture into the Chamber of the Eye.

Many years later, the tomb was visited by Illidan who was searching for the Eye of Sargeras to destroy Northrend on Kil'jaeden's orders. Maiev Shadowsong tried to stop him from claiming the Eye of Sargeras, and Illidan collapsed the chamber on top of her, setting off a chain reaction that collapsed the entire building. Maiev escaped, and the Tomb of Sargeras and the evils it contained were at last destroyed, the tools of the dark titan never to be used again, his dark reign hopefully fading forever into memory. The tomb's ruins are located on an eastern island in the Broken Isles to the east of the Maelstrom.

The Tomb of Sargeras has a prominent role in the World of Warcraft: Legion expansion. Gul'dan has broken into the tomb, claimed Illidan's body, and activated a portal for countless members of the Burning Legion to make their way to Azeroth. In game, it is portrayed as a major structure on the northern coast of the island that is the Broken Shore to the southeast of Suramar City. The Tomb is surrounded by fel-corrupted land and ruins that are overrun with demons of all sorts.

Although the tomb is described as originally part of Suramar City, it is actually slightly separate, but very close. A ruined bridge suggests it was once architecturally connected to the city, but the gap is very large now. Suramar City's faltering shield does not extend around the tomb. 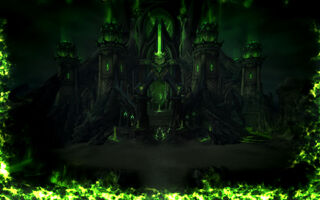 The Legion's portal at the Tomb of Sargeras, as seen during a cut-scene. 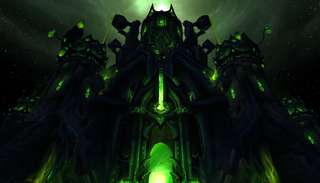 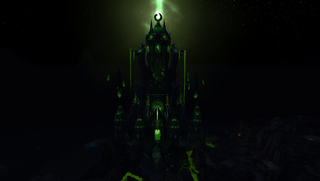 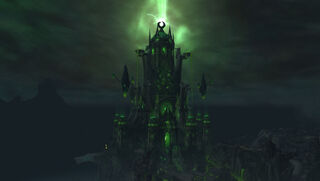 The Tomb of Sargeras from a better view

A daemon released from the tomb by Gul'dan.

One of the runes detailing Gul'dan's journey into the Tomb of Sargeras.