Were you looking for info on the

Transport ships come in many designs from different races but their purpose remains the same. They are used to carry troops and equipment across bodies of water to deliver them to battles in remote locations.

Transports are a vital part of the Alliance war effort, for it is these sturdy vessels which allow troops to traverse various waterways to engage in battle. Designed to carry and deliver several ground units directly onto the shore, Transports are slow and unarmed, and thus rely upon protection from Destroyers and Battleships.[1] (W2Man 49)

Transports are huge, skeletal ships charged with ferrying Horde troops across large bodies of water. Being slow and bulky, Transports rely upon magical armor to repel enemy fire. Although the Horde is known to defend their Transports with Destroyers and Juggernaughts, some reckless crews will sail straight into a naval engagement to deliver their troops to land.[1] (W2Man 76) 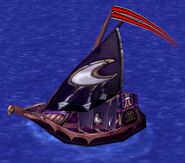 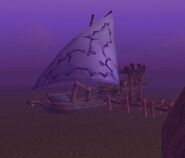