The troggs are the variation of humanoid created by the Curse of Flesh from the first type of Earthen created by the Titans. They retain the strength of the Earthen, but with greatly reduced cognitive abilities.

Following the war with the Old Gods, the keepers used the Forge of Wills to create new titan-forged to help them reshape the world. Yet their first designs proved too complex and overambitious. Rather than making the perfect servants, they had created stone-skinned savages known as troggs. The keepers quickly refined and perfected their designs. The next generation of titan-forged to emerge from the Forge of Wills would be known as the earthen.[2]

Dwarven scholars postulate that the experiment went wrong due to the interference of the Old Gods [3] (MoM 98). When the titans saw how brutal and misshapen the troggs were, Ironaya buried them in vaults all over the land that would become Khaz Modan, the main vault being the old titan city of Uldaman. They would serve as a stasis chamber for the creatures.[4] There they stayed for countless ages, until the dwarves began excavating Uldaman. The dwarves dug too deep and released the troggs from their ages-long slumber. Now the troggs have begun to spill out of every deep hole to spread terror across the dwarven kingdom. The troggs have an unnatural hatred of their “pretty” cousins the dwarves. Their stupidity is matched only by their tenacious hatred for dwarves.[3] (MoM 98) While some wandered the newly ordered world, others found their way into the domain of earth in the Elemental Plane, Deepholm.

Troggs resemble a parody of a dwarf, sporting an oversized skull with a sloping forehead, jagged teeth, and a prominent lower jaw. They clothe their stocky, hunched bodies in malodorous hides and carry crude clubs in their long arms. Malicious cunning sparkles in their deep-set eyes.[3] (MoM 98) [5] (MG 135) Troggs are about five feet tall, but exceed six feet when fully erect. Weighing in at approximately 300 pounds, their flesh is living stone that grants them a tough natural armor, though a practiced Geomancer can take advantage of this trait to control its mind. Troggs have no spoken language, instead communicating with guttural growls and grunts.[5] (MG 135, 136)

Troggs and dwarves are distant cousins, with some legends claiming that they descended from the primeval earthen race created by the titans. Dwarves evolved to their current stature while the troggs retained a stronger connection to the stone from which they were made. For reasons not fully understood, the troggs took the wayward developmental path, becoming crude and nearly bestial. Despite the relation, there are marked differences between trogg and dwarven behavior. Troggs prefer subterranean dwellings, but will live above if necessary. Troggs are omnivorous and use their strong, flat teeth to crush dirt and rocks to use as a digestive aid for raw meat and plant matter. Some of this gravel is absorbed and enhances their constitution.

Troggs are a barbaric, "caveman-like" race with limited intelligence and a great capacity for violence.[3] (MoM 98) They are dim-witted, savage, and uncivilized, but their ferocious cunning makes them dangerous combatants. They lack tactical subtlety, typically opening with a rage before rushing the closest opponent, clubbing it to death, and moving on to the next target.[5] (MG 136)

Barbarian is the most common trogg class with warriors and rogues appearing much less often. Healers and elemental shaman constitute the only spellcaster classes, though they are extremely rare. There are no arcane casters or tinkers among the troggs, though some scholars argue that, with proper education, a trogg could adapt to these roles. No one has bothered with trying to teach them. The hunter class might seem like a plausible alternative, but these creatures ostensibly lack the patience required for animal handling. An adventuring trogg is not an impossible, but such a creature would have many hurdles to overcome— primarily intelligence and language, but any trogg that could get past these and the myriad of other social stigmas would be an exceptional individual indeed.[5] (MG 136) 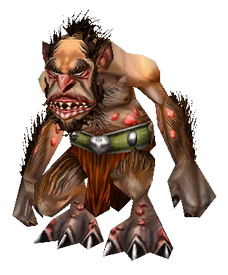 Troggs travel in large groups, though they rarely stay close enough together to alert each other of one is attacked. They worship salamanders and will attempt to capture and train young salamanders as mounts. If they slay or encounter a slain salamander, they will feast on its remains and make crude armor and weapons from its claws, teeth, and hide.[3] (MoM 89)

Troggs do not normally speak, although they can use grunts and bellows to get their messages across. Troggs with exceptional intelligence sometimes learn to speak Low Common; truly gifted individuals might learn Common or Dwarven.[5] (MG 136) Some troggs use Low Common or Dwarven as their primary languages.[3] (MoM 98)

Troggs appear in the zone of Deepholm. Cataclysm introduced a new species of troggs, stone troggs. An earthquake in Dun Morogh caused the troggs to spill out of their homes and attack the dwarves of Coldridge Valley.

Trogg is a reference to the word troglodyte or a caveman. The model name for troggs is troglodyte.