For the subrace of trolls, see jungle troll. For the polearm, see Darkspear (item).

Playable trolls are from the Darkspear tribe. They are members of the Horde.

As tribal rivalries erupted throughout the former Gurubashi Empire, the Darkspear tribe found themselves driven from their homeland in Stranglethorn Vale. Having settled in what are believed today to be the Broken Isles, the tribe soon found themselves entangled in a conflict with the Underworld Minions murlocs. Their fate seemed sealed until the orcish Warchief Thrall and his band of newly freed orcs took shelter on their island home. Controlled by a Sea Witch, the Underworld Minions captured the Darkspears' leader Sen'jin, along with Thrall and several other orcs and trolls. Thrall managed to free himself and others, but was ultimately unable to save the trolls' leader. Although Sen'jin was sacrificed to the Sea Witch, he was able to reveal a vision he had in which Thrall would lead the Darkspear from the island.

After returning to the island, Thrall and his followers managed to fend off further attacks by the Sea Witch and her murloc minions, and set sail for Kalimdor once again. Under the new leadership of Vol'jin, the Darkspear swore allegiance to Thrall's Horde and followed him to Kalimdor. Now considered enemies by all other troll organizations except the Revantusk, Shatterspear, and the Zandalari, the Darkspear are held in contempt to this day. Yet, the Darkspear have not forgotten being driven from their ancestral homes and this animosity is eagerly returned, especially towards the other jungle trolls. Having reached the orc's new homeland, Durotar, the trolls carved out another home for themselves — this time among the Echo Isles on the eastern shores of the new orc kingdom.

However, with the coming of Kul Tiras and its navy, the Darkspear were forced to retreat inland under the onslaught of the misguided commander Daelin Proudmoore. The trolls, fighting alongside their Horde brethren, defeated the enemy and reclaimed their new homeland. Shortly thereafter, a witch doctor by the name of Zalazane began using dark magic to take the minds of his fellow Darkspear. As his army of mindless followers grew, Vol'jin ordered the free trolls to evacuate, and Zalazane took control of the Echo Isles. The Darkspear have since settled on the nearby shore, naming their new village after their old leader, Sen'jin. From Sen'jin Village they, along with their allies, send forces to battle Zalazane and his enslaved army.[1]

Following the victory against the Lich King in the frozen continent of Northrend, Vol’jin renewed his bid to defeat Zalazane and launched a brilliant assault on the isles. With the help of the tribe’s ancestral loa, the courageous Darkspears killed the maddened witch doctor and seized their embattled home.

Political changes within the Horde sparked fears among the Darkspear tribe regarding its future. Vol’jin’s close ally Thrall named Garrosh Hellscream temporary Horde warchief. The brash young orc put the Darkspear leader and his tribe on edge, causing many trolls to leave the Horde capital, Orgrimmar. Although spirits were high among the Darkspears after Zalazane’s fall, tension lingered concerning what place the trolls would have in Garrosh’s Horde.[2]

Darkspear trolls have skin colors that range from pale, ghostly blue to bruised purple to sickly green. Their skin color is usually just one of those three colors, although sometimes there are trolls with mixed skin pigments but this is not common. Male trolls are hunched over and have long, protruding tusks that grow from under their lower lip. Male trolls also have rather large noses and very messy, matted hair. Female trolls, on the other hand, stand up straight and erect, have rather small or squashed-in noses, and usually have hair in a wild updo or strewn across their chests in thick braids.

In the expansion World of Warcraft: Cataclysm, Trolls have their own unique starting area within Darkspear Isle, rather than sharing Valley of Trials with the orcs.

[Da Voodoo Shuffle] - passive
Reduces the duration of all movement impairing effects by 15%. Trolls be flippin' out mon!

When fighting, trolls are often driven by instinct to a state of [Berserking], causing them to attack and cast spells more quickly. This state is even stronger if the troll is injured, making a cornered and wounded troll very dangerous.

Though usually exaggerated in tales, trolls' powers of Regeneration are still very strong. Provided a wound doesn't kill them outright, they can usually recover from it with little to no medical attention.

Trolls are excellent hunters and have developed skills in [Beast Slaying] over thousands of years. This has made bows and throwing weapons the iconic arms of the troll race, and has led to troll headhunters being one of the main forms of ranged support for the Horde.

Trolls' natural agility allows them to escape impediments to their mobility a bit more quickly than other races. The movements to do so resemble dancing and the trolls have termed them '[Da Voodoo Shuffle]'.

Warrior - Trolls have always had thorny relations with rivalling tribes for land and game, and the Darkspear were no different until recently. It is not uncommon for Troll tribes to battle each other for dominance. For the Jungle-dwelling Darkspear tribe, Troll Warriors are typically seen using two-handed polearms, suiting their verdant homelands. It is also assumed that the term "Headhunter" could refer to a Troll fighter that has killed many others, and traditionally keep their enemies' heads as gruesome trophies. Yet for the Darkspear tribe that has abandoned many brutal Troll traditions, this title may purely be for name and name only.

Rogue - Trolls are expert scouts in forest and jungle enviroments, after generations of living in these overgrown regions. Due to violence between tribes, it is not unlikely that these Scouts have been modified into assassins to kill Trolls of importance in other tribes. Witch Doctors also store a variety of poultices and poisons in their huts, and they may supply their tribe's assassins with deadly toxins from the surrounding jungle.

Hunter - Trolls are well-developed to hunting game in their forested homelands, camouflaging themselves in the trees to stalk their prey. Some Hunters even prove themselves worthy enough to become shadowhunters, such as Vol'jin, who dabble in ancient tribal magics to enhance their performance.

Mage - Trolls traditionally practice strange magics in their tribal communities, and their tribal mages, possibly referred to as more arcane-based Witch Doctors, may use tiki and hexes to [Polymorph] foes and warp elements around them.

Warlock - Troll Warlocks are very different to the reclusive summoners of civilised society. They employ agonizing hexes and voodoo, a source of magic shunned by many troll tribes. Zalazane, one of the most infamous Trolls known today, was a valued member of the Darkspear tribe that betrayed his kin by brainwashing them into a puppet-army. He dwelled in the Echo Isles for years, using voodoo to escape death time and time again, before Vol'jin finally amassed a focused Horde force to retake the isles once and for all. It is unclear how Zalazane became insane, but it is assumed he was a warlock and his own powers corrupted his mind.

Priest - The standard Troll religion is worship of Loa, jungle spirits, that represent the cycle of nature. Troll Priests use ancient chants and blessings to keep their respective tribes safe and protected from the evil shadows of the spirit-realm.

Druid - Druidism is primarily limited to the Darkspear, as it was only recently taken up by them and its founders were a part of that tribe. Troll sorcerers living on the Echo Isles who worshipped the Loa claimed that they had been contacted by these powerful nature spirits in their dreams. Some say this may have been a budding link between the Troll race and the Emerald Dream. They then developed their connections with nature, using ancient magics to take on the forms of animals. They then lived like this through Zalazane's domination of the Echo Isles, remaining hidden, until the Darkspear reclaimed their old home. This was when Zen'Tabra, the leader of the shapechangers, decided to share this new magic with the rest of the tribe.

Shaman - Living in tribal communities, Troll society has been lead by Shamanism for thousands of years. Their primitive lifestyle allows the Trolls to connect with the elements, and these wise elders are typically referred to as Witch Docters. They use their knowledge of the elemental spirits to soothe the souls of allies, and inflict enemies with primal hexes and tiki magics. The spell [Hex] originated from the Trolls.

Death Knight Trolls, like so many other races, have been ravaged by the scourge. Many forest trolls who dwelled in Lordaeran became scourged, but the Darkspear aid in Northrend caused Troll Death Knights to exist as well. A small number of these undead beings then broke free from the Lich King's grasp with the rest of The Ebon Blade.

Trolls are a tribal people, with strong ties to spiritualism. They are a race who loves nature, so make your character have strong ties to things of nature. The speech is pretty easy if you have ever heard a Jamaican talk or watched Avatar and listened to the Na'vi speak English. Here is an example:

"Da spirits be angry, dey do not like da war dat we be in." 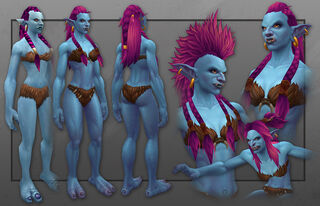 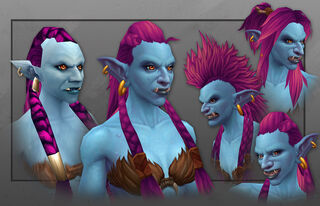 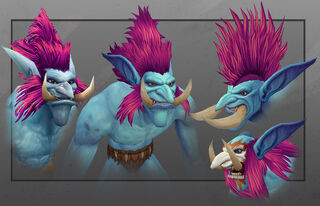 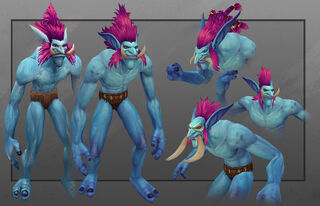 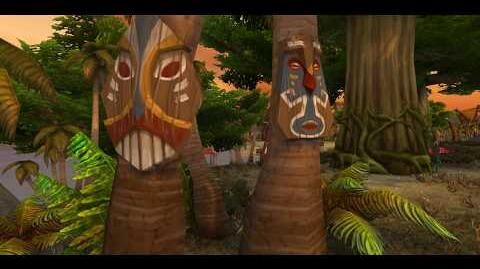 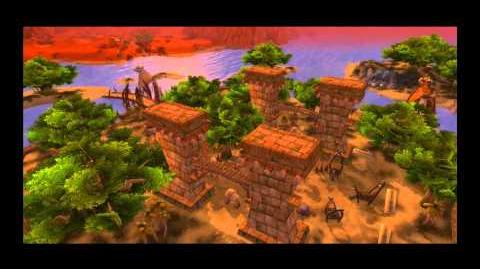 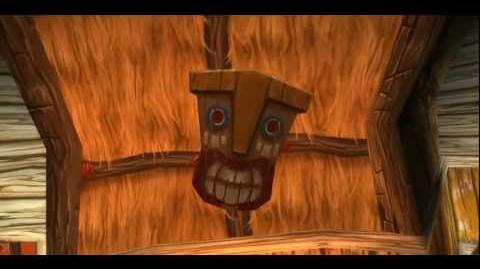