WoWWiki
Register
Don't have an account?
Sign In
Advertisement
in: Removed in Warlords of Draenor, Level 37 - 40 NPCs, Crypt fiends,
and 2 more

Tuten'kash is a level 37 elite crypt fiend mini-boss found in Razorfen Downs. It can be assumed that this foul creature was one of the retinue of Scourge who arrived in Razorfen to establish a foothold in the name of the Lich King.

After clearing the room, strike the Gong on the left side to summon 8 level 35 Tomb Fiends. Hitting the gong a second time will summon a group of 4 level 36 elite Tomb Reavers. Ringing the gong a third time will cause Tuten'kash to emerge from her cave. The gong can only be rung once the previous wave is destroyed, so if it cannot be rung chances are a nerubian has gotten caught in one of the corridors.

This large arachnid sometimes resists warriors' taunts, and has the ability to web her foes to the ground. Finally, she can place the Curse of Tuten'kash upon the party, reducing cast speed by 15% and increasing time between attacks by 18%, lasting for ten minutes. All in all she is not too difficult and drops several nice items, including a plate chestpiece and several variations of leather gloves. 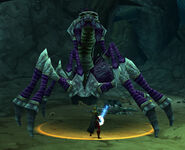 Tuten'kash with human for scale