Twilight Highlands is found in northeastern Khaz Modan, east of Wetlands. It was once known as Northeron, and is location of the ancient dwarven fortress, Grim Batol, and also contains many Twilight's Hammer clan settlements. The cult, under the leadership of Cho'gall, is working with Deathwing and his black dragonflight.

The red dragonflight fights against them, though their numbers are small. The Wildhammer clan is fractured internally while facing the cult, and the Dragonmaw clan is ruled by a despot unwilling to join forces with the Horde. Both clans must be brought to their full strength in order for the cult's plans to be thwarted.

Azeroth's inhabitants endure a lifetime of struggle and conflict. They're subject to violence from neighboring enemies and rampaging beasts at an early age, and must learn to take up arms to defend themselves against predators. Regularly forced to cope with the deaths of friends, family, and members of their tribes, clans, cities, and guilds, these scarred survivors become stronger by reinforcing their walls, banding together with new allies, and raising sharp, careful, resilient children. They adapt. They change.

Few places on Azeroth exemplify this ever-changing dynamic more than the Twilight Highlands of the Eastern Kingdoms.

The highlands have undergone constant upheaval throughout its history, with races and factions thriving, collapsing, and changing seemingly without pause. The fortress-city of Grim Batol has played host to no fewer than three potent factions: the Wildhammer dwarves, who abandoned their home after a Dark Iron curse left it uninhabitable; the red dragonflight, which was forced to fight for the Horde in the captivity of the Dragonmaw orcs during the Second War; and, of course, the Dragonmaw themselves, who were driven from Grim Batol when the red dragonflight was finally freed from their grasp.

The Dragonmaw now cling to the edges of the highlands. They're no less wild and difficult to deal with than when they ruled Grim Batol, but their knowledge of dragons and warfare is of unquestionable importance, especially amidst the chaos of the Cataclysm. The Wildhammer dwarves dwell in forested outposts among the highlands' mountains; though long friendly with the Alliance, they have only now begun to consider casting their lot in with Stormwind and Ironforge thanks to the entreaties of their cousins, the Bronzebeard clan. Even the mighty red dragonflight has suffered greatly in recent months: its members have been decimated by a frenzied, newly aggressive black dragonflight attacking relentlessly from the petrified Obsidian Forest.

Amidst this upheaval, a new power has come to possess the highlands.

Though the environment has been given many names throughout its history, it's only been dubbed "Twilight" thanks to the dominance of its current masters. The fanatical Twilight's Hammer cultists appreciate the name, but there are more functional features to the swath of land they've chosen as their headquarters. It's rimmed by massive mountain peaks that scrape at the sky like fingernails, making invasion by land nearly impossible, and the highlands' black-glass beaches ensure that marine assaults are fraught with terror; ships docking on the peninsula risk running aground.

More important to the cult, however, is the promise of worldly extinction and change that permeates the land. In the dimness of the highlands, shadows are deeper. The sun and the rest of Azeroth seem distant. The elements themselves are more pronounced: fires burn hotter; rain forces its way into the ground; and the heaves and shudders of the land call to mind some colossal being stirring beneath the earth. This doesn't frighten the members of the Twilight's Hammer; it lulls them to sleep.

Their dark work is done here in a manner that could never have been realized in Silithus. The devoted of the Twilight's Hammer train in the halls of mighty fortresses, not tiny compounds and outposts. They summon dangerous, mercurial elementals who loathe each other to the point of outright war but still pause their feuds momentarily to work towards the destruction of the other races. Outside the highlands, the cult is fractious and divided. Here, it is guided on its mission of destruction by some of the cruelest and bloodiest names in history, yet the names associated with this cabal belie the true extent of its leadership.

These dark whisperers chose the highlands as their base of operations for a reason. They can feel the presence of the Old Gods in the air and see their victory in the darkness. The shifting landscape, battling factions, and wicked elements embody the cult's vision of what its world will become as it is finally purged of life and order. The rest of Azeroth will follow the Twilight Highlands into oblivion, one way or another. [1]

The Highlands largely consist of gently rolling hills, covered in waves of green grass and scattered trees. Three quarters of the zone borders the Forbidding Sea, with great sand beaches. The northern and northwestern borders consist of the mountainous regions, with the northeastern section held by the Wildhammer clan. The other mountainous areas have been conquered by the Twilight's Hammer clan, with the exception of the secluded Vermillion Redoubt to the northwest.

From the western heights, Loch Verrall spills into the lower Highlands, the Verrall River winging its way through the heart of the zone. It splits the Highlands in two before emptying into the Verrall Delta and Forbidding Sea to the east. Two islands of note rest in the Sea: Krazzworks to the north, controlled by Horde goblins, and Highbank to the south, controlled by the Alliance.

There are a few caves in the region, all home to dangerous creatures of one sort or the other. All are on the eastern half of the region and highlight the difficulties heroes have to face. The Twilight's Hammer cult are stealing red dragon eggs and shipping them via a portal in the Vermillion Redoubt; two ogre magi loyal to Cho'gall perform dark acts of magic within the Den of the Disciples in the west; spirits haunt the cave at The Gullet; and one of the last breeding black dragons has made the Obsidian Lair her home to the south.

Near the Obsidian Lair is the Obsidian Forest, a once-thriving canopy of green that has been reduced to cinders by the black dragonflight. The Twilight's Hammer clan has lit fires of their own, most notably in the Humboldt Conflagration, where one of their Elemental ascendants has taken over, crushing the Wildhammer there and leaving their town in ruins. In fact, much of the Highlands is littered with dwarven ruins, from where the Wildhammer have had to retreat due to the overwhelming might of the cult. The largest of these is the Dunwald and Thundermar Ruins. The Dragonmaw clan fights endlessly with the dwarves over control of the latter.

Alliance: Players can depart the Greenwarden's Grove in the Wetlands and travel east through Dragonmaw Pass. For quest related purposes, Alliance players need to complete the introductory quests to the zone, beginning with Hero's Call: Twilight Highlands!.

Horde: Players need to travel south from Hammerfall in the Arathi Highlands and cross Thandol Span to enter the Wetlands. Once in the Wetlands, cut across the terrain southeast to access Dragonmaw Pass. For quest related purposes, Horde players need to complete the introductory quests beginning with Warchief's Command: Twilight Highlands!.

The zeppelins fly between the two points below.

The two most notable characters that Alliance players will interact with are Kurdran Wildhammer and Mathias Shaw. The former has returned to the Highlands in an attempt to unite the fractured Wildhammer clan, but infighting and dwarven stubbornness make that all but impossible. Players act as liaisons between the various clans, as well as emissaries for the Alliance, in hopes of assisting Kurdran and also bringing the Wildhammer into the ranks of the Alliance. Mathias Shaw is met after these delicate negotiations are settled, leading the way against the Twilight's Hammer clan and eventually aiding players against Skullcrusher the Mountain.

For Horde players, the first notable they will meet is Zaela. She is just one of many Dragonmaw orcs at Dragonmaw Port unhappy with the rule of their warlord, Mor'ghor. Players assist the Dragonmaw in overthrowing their wicked leader, and Zaela takes the mantle of leader for the clan, pledging her allegiance and troops to the cause of the Horde. Players later find Garona Halforcen, joining in her fight against the Twilight's Hammer clan and eventually fighting by her side against Skullcrusher the Mountain.

Both factions try to gain the favor of the red dragonflight, led by Alexstrasza. Much of this activity takes place within the Vermillion Redoubt, as well as Dragonmaw Pass. Players witness a battle between Alexstrasza and Deathwing in the air over Grim Batol, the fight helping to stall Deathwing's plans but leaving Alexstrasza greatly weakened.

As already stated above, the majority of the introductory quests for both factions have to do with bringing the local clans into the fold, the Wildhammer for the Alliance and the Dragonmaw for the Horde. Most of the activity for the Highlands focuses on the ongoing battle with the Twilight's Hammer clan, though the Wildhammer and Dragonmaw cross swords on occasion.

Players also perform tasks for the Earthen Ring at the Ring of the Elements, where the clan has summoned forth a massive servant of the Old Gods, Iso'rath.

For those wanting to do a higher-level version of the Ring of Blood and Amphitheater of Anguish, groups can go to the Crucible of Carnage in the middle of the zone. 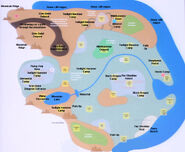 Concept map of the Twilight Highlands from Blizzcon

Remains of the Fleet 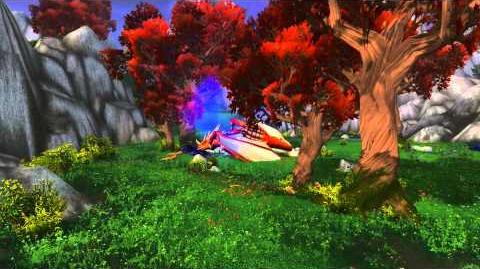 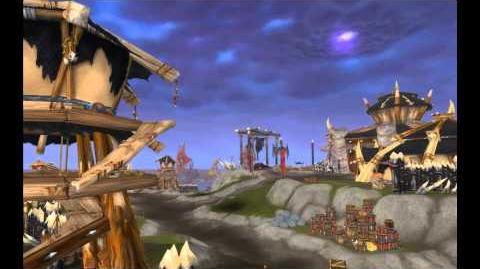 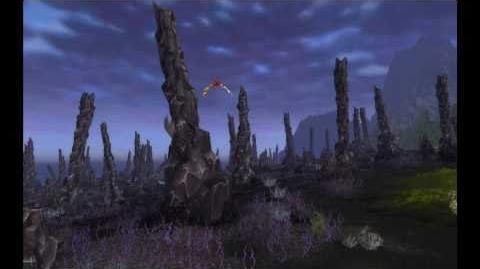 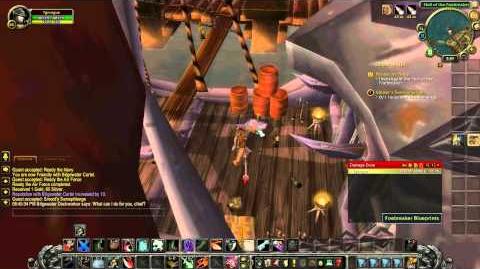