Only by working together will you defeat the final challenge. From the depths of Icecrown come two of the Scourge's most powerful lieutenants -- fierce val'kyr, winged harbingers of the Lich King!
—Tirion Fordring

Eydis Darkbane, are a pair making up the fourth (and ostensibly final) encounter in the Trial of the Crusader raid. They both share the same health pool much like the Twin Emperors. Fjola and Eydis are two very powerful Val'kyr that were originally sent by the Lich King along with their Vengeful Val'kyr army to disrupt, destroy, and terrorize the Argent Tournament and its citizens. But during this attack Argent Confessor Paletress comes to the defense of the tournament and battles the twins. Paletress is victorious, and Fjola and Eydis are captured. Their bonds are maintained by Priestess Alorah and Priest Grimmin. They later appear as the "final" challenge of the coliseum after the raid has defeated the Faction Champions.

As usual, the encounter is started by talking to the NPC. The Twins and four portals spawn: two portals near the Twins, and two on the opposite side (near the NPC and the door). If the whole raid stays close to the NPC, the Twins will not aggro. It's also safe to use the portals on the NPC side of the room. The four portals - two light, two dark - are the central element of the encounter. Using one of them gives the player either a light or a dark buff. This buff reduces damage against same-color targets by 50%, but increases the player's damage against opposite-color targets and makes the player immune to same-color damage.

To address this mechanic, the raid should be divided into two halves. Both halves should have one tank, a similar number of healers, and be able to deal similar DPS. One half of the DPS takes the light buff and sets up near Eydis Darkbane; the other half takes the dark buff and goes to Fjola Lightbane. Each tank takes the buff of the opposite color as the boss they will be fighting, as otherwise they will not be able to keep aggro. The Twins' melee damage is not modified by the tanks' colors so this is a non-issue. The Twins share a health pool and will die simultaneously without any special coordination on the raid's part.

Once the encounter is started, light and dark orbs spawn from the walls at regular intervals and move randomly around the room. If they touch an opposite-color player, the player takes 7000 damage. To mitigate raid damage from these, healers should attune to the opposite color of the DPS group they are healing and act as soakers for orbs of their color. For example, a light-attuned healer should intercept light orbs headed for the group of dark-attuned DPS attacking Lightbane, but allow the dark orbs through. (Fire Resistance and Shadow Resistance Aura may also be helpful, as the light orbs do Fire damage and the dark orbs do Shadow.)

If the orbs touch a same-color buffed player, the player receives a stacking speed and damage buff called Powering Up. At 100 stacks, this will trigger Empowered Light or Empowered Darkness, which increases damage dealt to opposite-color targets by 100% for 20 sec. Thus both DPS and healers should actively seek out orbs of the same color as their essence to acquire this boost.

The Twins share the same two main abilities: Vortex and Twin's Pact. If either Twin uses either of these abilities, the other half of the raid must swap their color buff, wait until the effect is over, and then switch back to their original color. The abilities are used in a random order, but the Twins will cycle through all four abilities - Light Vortex, Dark Vortex, Light Pact, and Dark Pact - before repeating one. This gives the raid some limited ability to predict which is coming next and preemptively swap colors if necessary.

When one boss casts Vortex (8 sec. cast), each player must be sure to have the same-color buff as the boss who is casting or they will take a total of 30,000 damage. After the Vortex is finished, the affected players should switch back to their original color. This swapping is made simpler by tanking each Val'kyr next to a portal of the same color so that, for instance, light-attuned melee attacking Darkbane can quickly and easily attune dark to survive her Dark Vortex, then run to the light portal to reattune.

If either Lightbane or Darkbane casts Twin's Pact, that twin shields herself and begins a 15 second cast which heals the Twins for 20% of their maximum HP. In order to interrupt the cast, the shield must be removed by damage. All damage dealers should change to the appropriate color to bring down the shield. Once the shield is down, the cast must still be interrupted. In standard UI, if the enemy cast bar is turned on, the cast bar will be in metal frame indicating it is uninterruptable. The moment the shield is down the frame will disappear so it can be used as an visual clue. Deadly Boss Mods will also throw up a warning saying "Interrupt Now" when the shield is broken.

You can also just have all DPS swap to the other target immediately, since by the time most people get to the opposite color, get back, and start DPSing again, the shield timer will be almost done and the heal will most likely go through.

In addition, when Lightbane or Darkbane cast Twin's Pact, the other gains Power of the Twins for 15 seconds. The tank on the Twin not casting will take increased damage during this time, as each melee hit the Twin lands increases her attack speed until Power of the Twins fades.

Have the majority of the raid attune to one color and attack only one Twin. If, for example, the raid attunes light and attacks Darkbane, this trivializes Dark Shields and Light Vortexes, and the raid only really needs to worry about the other two abilities. To further simplify the encounter, raids who choose to focus damage on only one Twin often ignore shields on the other Twin and allow the 20% heal to go off. However, this is only viable if your raid has high enough DPS to compensate. Healers should still attune to the opposite color of their targets and act as orb soakers.

Twin's Pact now heals for 50% rather than 20%. This means interrupting it is almost essential. You can allow them to get off one heal and still defeat the encounter, but two heals will mean hitting the enrage timer.

The Twins also gain a new ability called Touch of Light and Touch of Darkness. This is cast on random players during the encounter and causes them to inflict AOE damage to players around them who are of opposite attunement. It can be preemptively removed if the affected player swaps colors. However, Touch of Light/Darkness will not harm players with the same attributes as the Touch, so if the raid is segregated properly this poses little threat.

Finally, light and dark orbs now do significant amount of damage to players of the opposite attunement (around 15000 HP). It is a guaranteed swift death to anyone who is not a tank if they take two orbs of the wrong color or are affected by Touch of Lightness/Darkness. You can deal with the orbs in one of two ways:

With both methods, you may end up with uneven number of DPSers of each attunement. Because Empowered Darkness lasts longer than Empowered Light on Heroic mode, assign the greater share of DPS to attune dark.

Beyond the positioning, the Soaker Strategy is exactly the same as normal mode. However, the Doorway Strategy is quite different. For this approach, the raid remains dark-attuned during the entire fight to maximize DPS time and simply tries to heal through the Light Vortexes via raid healing techniques (e.g. paladin's Aura Mastery). Everyone must blow their defensive cooldowns to help the healers during a Vortex of the opposite color. Warlocks and holy/disc priests have no such abilities and should be placed together in one group for Prayer of Healing spam. Due to the length of some classes' cooldowns, it may not be possible for the raid to survive two Light Vortexes. Thus a major goal of this strategy is to get the Twins down after only 4 or 5 special abilities have been used.

Another issue with this strategy is dealing with the dark twin's shield. Prior to Patch 3.2.2a, Twin's Pact only healed the Twins for 20% and could be safely ignored. However, with the increase to 50%, this is no longer an option. Because the raid remains dark-attuned, DPS is nerfed by 50% against Darkbane. All DPS should save their offensive cooldowns for a dark shield, and preemptively target the dark twin when a special ability is incoming to get a head start in case a "bad" shield occurs.

Fjola Lightbane yells: You have been measured, and found wanting!

Outro (Horde)
Garrosh Hellscream yells: Do you still question the might of the Horde, paladin? We will take on all comers!

As with the other bosses in the instances, there are separate versions of each item for Alliance raids and for Horde raids. Fjola drops two items from her loot table and Eydis drops one when slain.

This boss encounter may have been inspired by Ikaruga, a game with a similar mechanic: absorb one color of bullet, avoid the other color, and switch on demand which color you want to absorb. 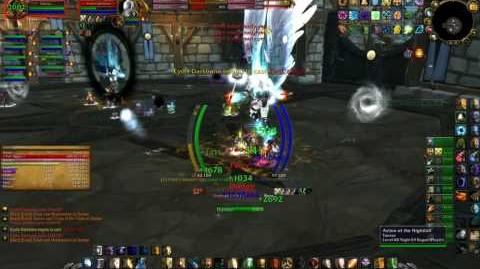 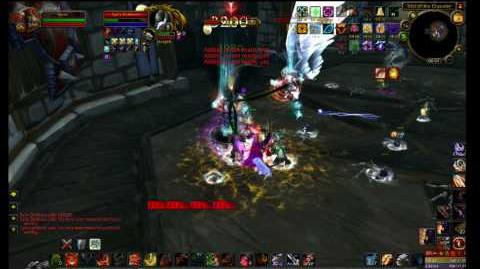 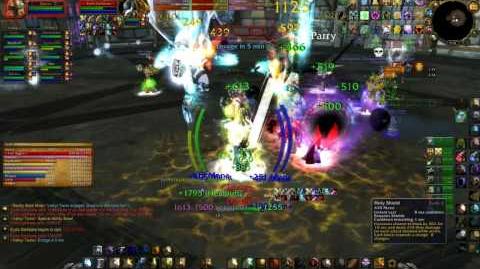 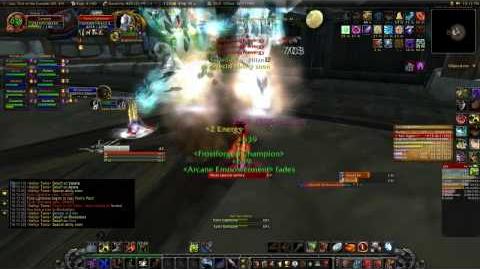 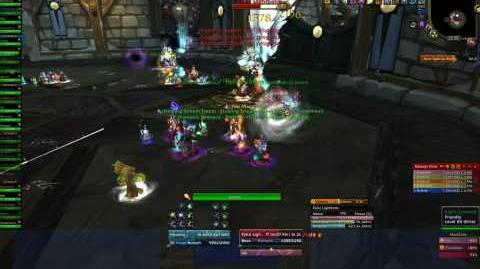 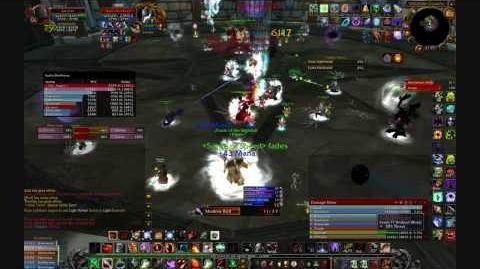 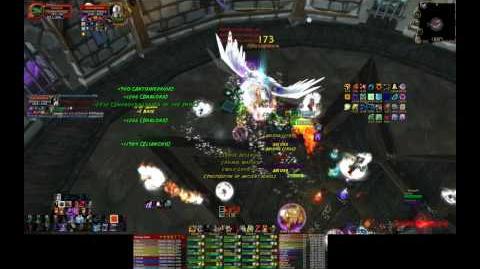 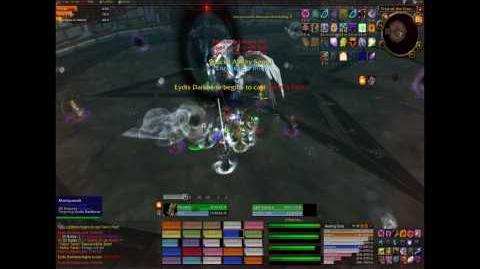 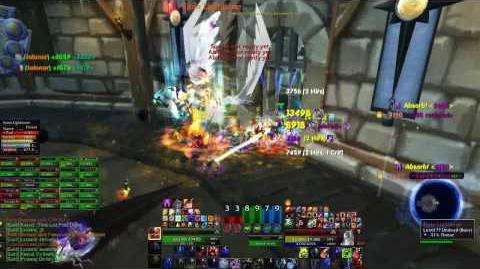 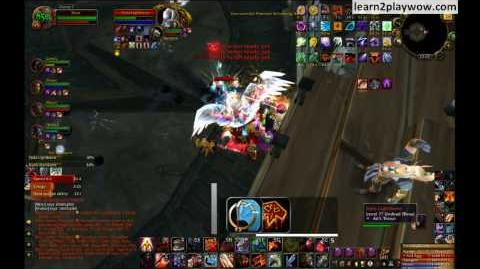