Not to be confused with Tyr's Hand.

Deceased
Tyr was a titanic watcher. He once resided at the Temple of Order, but was absent during the time of Loken's rebellion.[1] It is said that no indications of struggle or guardians were present. Tyr is one of the only keepers left by the titans not to appear in the Ulduar complex.

Tyr was one of the great titanic watchers, known as keepers, who were tasked to shape and guard Azeroth once the titans left it to its own devices. Tyr was instrumental in dismantling the Old Gods' Black Empire and sealing them deep inside Azeroth. Tyr and Odyn also defeated Ragnaros the Firelord, forcing him back to his fortress in the east of Kalimdor, before the Elemental Lords were sealed in the Elemental Plane.

Tyr lost his hand while fighting Galakrond. His attacker, known to most as the Father of Dragons, was a giant proto-drake deformed from eating his own kind, trying to fulfill ever-lasting hunger. Tyr forged an alliance with the proto-dragons Alexstrasza, Ysera, Neltharion,Malygos, and Nozdormu. The dragons, lead by Tyr, fought with Galakrond. When he lost his hand and later defeated him, they honed their strengths without the aid of the keeper. During a particularly brutal battle, Galakrond bit off Tyr's right hand, suffusing the keeper's form with necrotic energy. Tyr survived, but was unable to heal his hand; many years later, he replaced it with a hand of purest silver.[2]

It was after this event that they became known as the five aspects and chose to hide. Tyr had always seen bravery in the dragons, and it was the reason he chose to fight alongside them against Galakrond, and imbue them with the powers they had to control various aspects of Azeroth.

When one of his fellow keepers, Loken, fell to the corruption of Yogg-Saron, Tyr and his allies stole the Discs of Norgannon to investigate the extent of Loken's betrayal. Discovering the theft, Loken sent horrific monsters—two C'Thraxxi—after Tyr's group, but Tyr sacrificed his life to fight the creatures while his comrades escaped with the discs. The Keepers Archaedas and Ironaya buried Tyr and his foe beneath the glade where they fell, which since became known as Tirisfal; "Tyr's fall."[3]

The story of Tyr has since slipped into memory, as the young race of humans struggled to survive using the limited supplies provided to them by the parents who had abandoned them. They occasionally took to gathering around a fire whilst trying to read from scrolls telling of ancient heroes and leaders – tales from the civilization that had cast these creatures out. One of these scrolls spoke of a great leader, a paragon of order and justice, who sacrificed his right hand in a fight against an unfathomable evil. In this way, the story impressed upon those who read it that true order and lasting justice can only be accomplished through personal sacrifice.[4]

As one of the titanic watchers, Keeper Tyr bore The Silver Hand in countless battles against the titans' enemies. After his death, his hammer was buried with him somewhere beneath the land now named in his honor: Tirisfal. [5]

The titanic watchers Tyr and Archaedas created Truthguard when their comrade, Loken, fell to corruption. They gave Truthguard to a vrykul champion who used it to expose Loken's treachery. When Tyr and his allies later stole the Discs of Norgannon and fled, the champion stayed behind and held off many of Loken's servants. A desperate Loken sent horrific monsters after Tyr, who fell in combat. In time the vrykul champion migrated to Stormheim in the Broken Isles, where the shield was eventually entombed in the Path of Kings. [6] 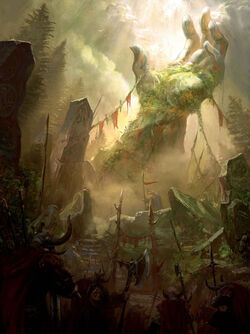