Princess of the Blue Dragonflight (presumed)

Tyrygosa (also spelled Tyrigosa) blue dragonflight and ex-suitor of Kalecgos. When taking Humanoid guise she has refused to take the form of a human, finding elves more aesthetically pleasing, and seem to prefer not to meddle in the affairs of mortals. Her alias is Tyri, possibly either a nickname given to her by Kalec or a name she goes by when in disguise.

Currently, she is a love interest of Jorad Mace, despite of their kind difference. Though a blue dragon trusts a palladine as her friend, she still does not have any strong feelings to him.

According to what has been shown, Tyrigosa is a hot-tempered, over-confident and a prideful dragon - not fearing before even bigger and stronger opponents. Though she usually acts pretty prejudicing towards non-dragon creatures, she is a good leader and negotiator - which has been shown when she and her subordinates faced both elfs and orcs. Kalecgos was sent by Malygos to Lordaeron on a mission for the blue flight. Worried about her future mate at the time, Tyrygosa followed, arriving just in time to rescue Kalecgos from the undead Scourge. They were joined by the Human Paladin Jorad Mace and a strange young woman by the name of Anveena Teague. The four journeyed together for a while, their exploits eventually leading them to the land of Quel'thalas where after being assaulted by the traitor Dar'Khan Drathir and an enslaved Korialstrasz they discovered Anveena was the new avatar of the Sunwell. With the assistance of Sylvannas Windrunner Dar'khan was defeated and Anveena was left in the care of Lor'themar Theron and Halduron Brightwing. Kalecgos, having sworn to look after her, remained in Quel'thalas as Anveena's guardian. Tyrygosa departed, along with Jorad Mace, after wishing Kalecgos farewell.

Sometime after the reopening of the dark portal and the blue dragonflight's battle with the nether dragons attempting to come through, Tyrygosa traveled to Outland, along with Jorad Mace, to study the mysterious flight of dragons. At one point she took control of a brood with the help of adventurers at the Celestial Ridge in Netherstorm.

The dragon's Nether-warped physiology began to affect the Spell-Weaver himself, ultimately helping him regain some of his lost sanity.[1] With his sanity restored to him, Tyrygosa's patron declared war on mortal spellcasters, sending his flight out to do his bidding. Tyrygosa's involvement (or uninvolvement) in the Nexus War has yet to be seen.

Tyrygosa does not appear in-game until the

Tyrygosa, in the disguise of Tyri, can be seen in The Burning Crusade at Celestial Ridge in Netherstorm

, along with Jorad Mace. She is involved in the investigation of nether dragons in the area. After asking adventurers to assist her by defeating the dominant Netherdragon in the area, Veraku, she takes control of the brood, planning to keep them safe and in check.

She starts the following quests:

As of Patch 4.3, she appears at Wyrmrest Temple during the Dragon Soul raid to aid adventurers against

Tyri, along with Jorad Mace, is set to appear in the upcoming Burning Crusade manga: Shadow Wing as a main protagonist.

Though she stands on all 4 legs in WoW games, she is being a bipedal in WoW manga. 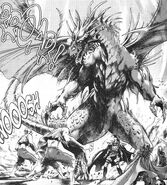 Tyri and Jorad on the cover of The Dragons of Outland