For the greater complex of which this dungeon is a part, see Ulduar.

Keepers of the Grove

Ulduar is a raid dungeon in the titan complex of Ulduar which is located in the Storm Peaks. It serves as the prison of the Old God Yogg-Saron[1] as well as the current residence of most of the titanic watchers who have fallen under its influence.

Ulduar was implemented in patch 3.1.0, intended to be one grade in difficulty above Naxxramas.[1][2][3]

Since discovering Ulduar in the Storm Peaks, adventurers have journeyed to the titan city to learn more about its mysterious past. Further exploration has revealed that the magnificent complex is above all a prison, intended to permanently confine the Old God of death, Yogg-Saron. This ancient horror has corrupted its guards, and now it is breaking through the last of its restraints.

Faced with the peril of Yogg-Saron's imminent freedom, a band of mortals has made preparations for a sweeping assault on the city. Overcoming the legions of iron minions and towering defenses at the city's entrance will take tremendous strength, but even that great victory may not be enough to overcome the madness that dwells below.

Ten of the raid dungeon's fourteen encounters have hard modes (different from normal and heroic modes).[4] Algalon the Observer is a hard mode-only but optional encounter. Encounters completed on hard modes reward achievements as well as extra and/or improved item rewards.[1][5] Siege vehicles play a role in the dungeon's first encounter, Flame Leviathan.[1]

The dungeon does not follow a completely linear progression; Yogg-Saron and Algalon the Observer are regarded as the most difficult encounters, and are accessible independent of each other. 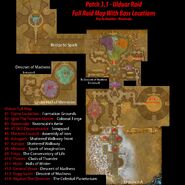 Ulduar was available on the Public Test Realms, however, the entire dungeon was not tested at one time. The United States and European PTRs tested different encounters. All encounters were tested but Yogg-Saron and Algalon the Observer.

Many players revere Ulduar as being best raid in the game for having excellent music, story and gameplay (ex. non-binary hard modes) and often criticize Trial of Crusader for providing better loot with lesser effort thus leading to fall of Ulduar in popularity.[citation needed]

WorldOfWarcraft.com Under Development (US): Ulduar