300 (a smattering of individuals from all races)

Lush Un'Goro Crater ("God Lands" in the Qiraji language[1]) lies at the southern part of Southern Kalimdor, between Tanaris, Silithus and Uldum. Although the area is almost completely isolated from the rest of the world and sandwiched between three deserts, the region is filled with exotic plant life and even more exotic creatures, from peaceful earth elementals to raging devilsaurs, the locals are not to be trifled with.

The pylons on the ridges of the crater defy explanation, despite close examination. They could mark where the titans might reappear during their second visit to Azeroth, a visitation supported by holograms in both Uldaman and the front of Uldum. These pylons could also share the same purpose as the pillars in Sholazar Basin, too. The Avatar of Freya, the Lifewarden, mentions that Un'Goro is a similar place to Sholazar, where the titans were performing experiments to create new life forms in Azeroth.

Un'Goro Crater was revealed to have some connection with the titans by Geologist Larksbane during the Ahn'Qiraj solo quests.

Un'Goro is known for many of its popular culture references, in particular, the myriad Nintendo characters and places. Its high ratio of dinosaurs, crystal pylons and mysterious ruins give off a distinct "Land of the Lost" vibe, which chronicled the adventures of the Marshall family in a prehistoric pocket universe.

From Geologist Larksbane in Silithus:

...The night elf army was pushed back through Un'Goro Crater, to the borders of the Tanaris desert. Something in Un'Goro prevented the Qiraji from being able to take the land. I do not quite understand this word but I believe it to mean 'God Lands'. It is stated that they could not 'take the God Lands'.

Fascinating, this coincides with theories of Un'Goro being the home of the Titans when they inhabited Kalimdor. Perhaps Aman'Thul himself watched over 'The God Lands'. Hrm, curious...

Aside from this direct reference little is known regarding the crater's fascinating history, save that the crater is ancient beyond living memory.

Aru-talis may be an incorrect night elven legend about Un'Goro Crater.

Alliance and Horde
Un'Goro can be reached from Silithus to the west or Tanaris to the east. In the South-Western most point of Tanaris there is a path between two dark-grey stone pillars (in Thistleshrub Valley[27, 56]). In some places it is possible to jump into the crater in stages, avoiding death. However, those who don't want to take the chance can use the ramps leading down to the crater floor, found in southwestern Tanaris and northeastern Silithus.
The flight paths for the zone are southeast of Fire Plume Ridge in Marshal's Stand and northwest of Fire Plume Ridge at Mossy Pile. Both camps are associated with Gadgetzan, therfore you will be attacked when hostile with this faction. The flight path at Marshal's Refuge does not exist as of Cataclysm as it has been overrun by Stone Guardians.

Un'Goro is a massive crater full of amazingly lush jungle and teeming with life. Dinosaurs roam freely here, as the land is wild and unpredictable. At the center of the crater a volcano rises, and Fire Elementals prowl. In addition, many strange and beautiful crystals dot the landscape, their purpose unknown to most but an object of research for some of the adventurous scientists camped in the area.

There are no instances in Un'Goro Crater, nor any battlegrounds.

In Cataclysm, Un'goro Crater will undergo some minor changes. Two new flight paths will be added, as well as some new vegetation.

At Marshal's Refuge, Williden Marshal has led a team of explorers and biologists to take refuge from the crater's monstrous wildlife. Near the entrance to Tanaris, Torwa Pathfinder attempts to hunt down the elusive Lar'korwi. And at Fire Plume Ridge, poor Ringo desperately awaits the help of bold adventurers to guide him to safety from the powerful fire elementals that roam the crags, led by the terrible Blazerunner.

Quests in the crater range between level 50 and 55. Most quests in this area involve performing tasks for the scientists found at Marshal's Refuge, studying the life, history, and crystals of the crater. There is also a chain in which players help to identify and deal with the silithid menace which has appeared in southern Un'Goro.

Un'goro Crater is a region largely untouched by the advances of modern society, and as such boasts a large variety of natural minerals, plants, soil and crystals.

Miners will find both Thorium Veins and Rich Thorium Veins as well as a smattering of Mithril Deposits throughout the crater, particularly around the walls. More can be found at Fire Plume ridge, in the middle of the crater, and also in the South West part.

Herbalists will find a variety of herbs growing throughout the crater. Blindweed is commonly found near the northern tar pits. Sungrass and, more commonly, Dreamfoil are available on grassy areas. Liferoot is found by the water. Firebloom and Mountain Silversage grow on the hot rocks of Fire Plume Ridge.

Soil may be found in numerous piles around the crater. Harvesting this is possible even without a profession, and usually nets 1-4 Un'goro soil samples. This is used together with Tharlendris seeds and an Evergreen Pouch to produce Morrowgrain, used in repeatable reputation quests for Thunder Bluff/Cenarion Circle and Darnassus/Cenarion Circle, depending on your faction. It can be sold to vendors for 1

Also available are the Power crystals: blue, red, green and yellow. These can be used with the power pylons in exchange for temporary buffs. These are accessed after completing a quest for J.D. Collie, a gnome located at the back of the crystal cave in Marshal's Refuge, who gives a manual instructing which crystals are used with what pylon. They are also used in a few Arcanum quests. They cannot be sold to vendors but can be auctioned or traded.

In Un'Goro there are 3 Pylons: a Northern

A southern pylon is mysteriously absent and it may be significant that there are no Silithid hives near the Un'Goro pylons except in the south. Scattered throughout Un'Goro are crystals colored either red, yellow, blue, or green. The crystals can be used on the Pylons providing you have the right combination of crystals. The pylons require all three quests given from J.D. Collie at Marshal's Refuge to be complete before they will accept your crystals.

For more on this, read the Power crystals.

[77] The Lifewarden's Wrath given by Avatar of Freya in Sholazar Basin.

Although not explicitly stated, it is heavily implied that Un'Goro, like Sholazar Basin is one of the titan's "life zones," described as the laboratories the titans used to create and foster life during their arduous re-shaping of Azeroth. Like the basin, Un'Goro is unusual ecologically and geographically, contains crystal pylons, and has remnants of guardian constructs that protect the land. 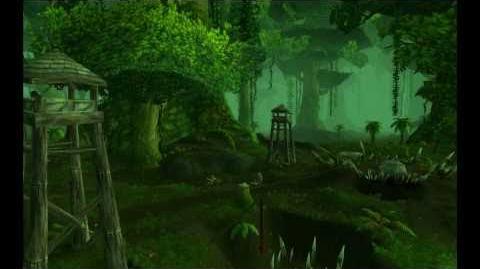 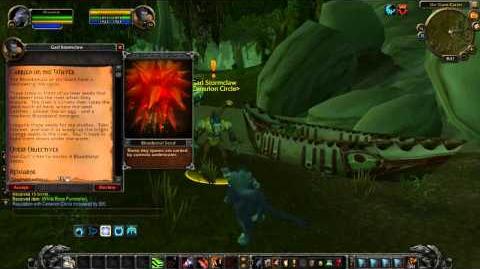