For the faction, see Undercity (faction).

Sylvanas Windrunner, Banshee Queen and Dark Lady of the Forsaken

The Undercity is the capital city of the Forsaken undead of the Horde. It is located in Tirisfal Glades, at the northern edge of the Eastern Kingdoms. Far beneath the ruined capital city of Lordaeron, the royal crypts have been turned into a bastion of evil and undeath. Originally intended by Prince Arthas to be the Scourge's seat of power, the budding "Undercity" was abandoned when Arthas was recalled to aid the Lich King in distant Northrend. In Arthas's absence, the Dark Lady, Sylvanas Windrunner, led the rebel Forsaken to the Undercity, and claimed it for her own. Since taking up residence, the Forsaken have worked to complete the Undercity's construction by dredging the twisted maze of catacombs, tombs, and dungeons that Arthas began.

The Undercity was so named many years before the Forsaken claimed it as their own. Far beneath the palace of Lordaeron, the Undercity held the ancient crypts and catacombs of Lordaeron's royalty, as well as the city's dungeons and sewers. Although the Undercity was only intended for prisoners and the dead, the poorest of the Lordaeron people lived within. When the Alliance captured Orgrim Doomhammer, they sent him to the Undercity; sometime later he managed to escape and wandered for many years afterwards.[1]

Lordaeron's capital city stood for centuries, a monument to humanity's might. In the Third War, Prince Arthas slew his father, King Terenas, in Lordaeron’s throne room and ransacked the city. He planned to use Lordaeron as his capital on this continent and ordered his minions to expand the catacombs beneath the city. Then the Lich King summoned Arthas to Northrend and the work was left uncompleted.

During Arthas' exodus, Sylvanas Windrunner broke free of the Lich King’s control and took many banshees and other undead with her. With Varimathras' assistance she defeated the dreadlords that controlled the city and set her newly dubbed Forsaken to finish Arthas' job in the dungeons. The Forsaken carved the Undercity and now rule the surrounding countryside.[2]

While the forces of the Horde and the Alliance were concentrated on a joint effort at Angrathar the Wrathgate, an uprising broke out within the Undercity. Demons of the Burning Legion and Forsaken rebels led by the dreadlord Varimathras and Grand Apothecary Putress managed to take control of the Undercity, killing several Forsaken and nearly killing the Dark Lady as well. In response the Horde led by Sylvanas Windrunner and Warchief Thrall attacked from the front entrance to reclaim the city. While the Alliance led by Varian and Jaina attacked from Sewers to restore Lordaeron to the Alliance. The ensuing battle ultimately killed both Varimathras and Putress, along with their fellow demons and Forsaken rebels.

However being no stranger to broken dreams, it is only fitting that Lordaeron bore witness to the end of the Horde-Alliance treaty as King Varian declared war upon the Horde after seeing the status of the once proud city. Jaina subsequently teleported the Alliance back to Stormwind.

With Patch 3.3.0, Thrall sent a legion of Kor'kron Guard led by captain Bragor Bloodfist, who replaced Varimathras, with Kor'kron Overseers replacing the Undercity Guardians, in order to ensure that the events of the Battle of Angrathar the Wrathgate never occur again. Some guardians still remain in the Sewers; it's unknown if this is an error or not.

After the death of Arthas, the Undercity was attacked by the Emerald Nightmare's mists and shadowy warriors of nightmares. Sylvanas, half of the Forsaken and all Horde representatives were having nightmares. Sharlindra and some Forsaken witnessed Sylvanas' murmur and moments later, shadowy figures attacked Sharlindra and her followers - thus the whole Undercity was enveloped by the Nightmare.

In  Cataclysm, the Undercity was "redesigned to accommodate flight.", as seen on the image to the left. The city has been fleshed out from its original "cardboard cutout" setup and is now a complete edition of the broken Lordaeron.

For retaliation in the burning of Teldrassil during the War of the Thorns, Anduin Wrynn and the Alliance lay siege to the Undercity. Sylvanas, having expected such an attack, attempts to trap the Alliance leadership multiple times with blight, but this is thwarted each time by Jaina Proudmoore. It is during this last blight explosion that the entirety of the Undercity is engulfed, leaving it uninhabitable even for the Forsaken.

The Undercity is an extension of the crypts and dungeons originally beneath Lordaeron's capital city. The Forsaken dredged out complex catacombs and caverns. The place is dark, smells of corpses and has an evil feel. Spiders, oozes and other subterranean creatures occupy the distant passages.[3] It is drastically different from any of the other capital cities for the Horde. Unlike Thunder Bluff and Orgrimmar, which are at the surface and often the sites of multiple festivals, the Undercity is dark, dreary, and cold. The Forsaken, however, are known for holding two festivals, Hallow's End and Pilgrim's Bounty.

The city is made up of roughly symmetrical quarters arranged around a circular center.

Since the release of The Burning Crusade, players with the expansion are able to access an Orb of Translocation to the Silvermoon City palace, making it easy for anyone to travel between the two cities without having to go through the Plaguelands. The translocator works both ways. The Undercity orb is located in a newly opened city section west off the main part of the Ruins of Lordaeron. The translocator teleports you to the Inner Sanctum of the Sunfury Spire within Silvermoon City.

It cannot be used by the Alliance.

It is unknown who constructed the memorial to Terenas. It's possible that some Forsaken, feeling some residual loyalty to Lordaeron did it. It could also have been the members of the Silver Hand from when they retrieved Terenas' body. Another possibility is that the remaining Alliance forces in Lordaeron under Garithos erected the memorial during the short time that they controlled Capital City before Sylvanas took control.

It is also unclear what the tomb actually contains, since Terenas was cremated and his ashes were scattered by the wind.

Voices In The Throne Room

Some may note they hear whispers and voices throughout Undercity, but within three areas in the Ruins of Lordaeron, there is significant words spoken. All of these sounds relate back to Warcraft III, in which Arthas returned to Lordaeron and killed his father, King Terenas.

In the area where the bell is, you can hear the bell ringing in the ambiance, signifying Arthas' return. Upon moving from the bell tower to the hall before the throne room, the ambiance heard is the cheers of the People of Lordaeron welcoming Arthas back home. Upon the ground is dead rose petals, significant from the cutscene in Warcraft III in which the citizens showered Arthas with them as he walked to the throne room.

Upon entering the throne room, multiple voices are heard, the first being King Terenas and the warning given by the prophet, Medivh. Soon after, you hear the exchange between Arthas and his father as he kills him. The blood stain of the crown falling on the floor from Warcraft III can also be seen on the floor near the throne.

The following are the lines heard, which come in 5 separate waves. To best be heard, turn off your music and sounds, leaving only ambiance on and turned up.

Medivh: "Yet Prisoners they are, my good king."
King Terenas: "What is the meaning of this? Who are you?"
Medivh: "Humanity is in peril. The tides of darkness have come again..."

Arthas: "You no longer have to bear the weight of your crown. I have taken care... of everything..."

Arthas: "This kingdom shall fall... And from the ashes shall arise a new order that will shake the very foundations of the world."

For those who want to hear this without venturing to Undercity, it was once possible to hear the sound by going into the data files, however, with the new file structure implemented by Blizzard this sound can only be heard by typing the following:

It may be easier to execute this by using a macro, as to make sure you don't misspell anything. Also, this is considered a sound when executed this way, so you must have your sound on and nothing else to hear it best.

Below are the two cutscenes where the voice clips are taken from. 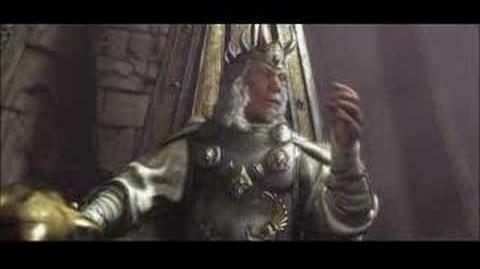 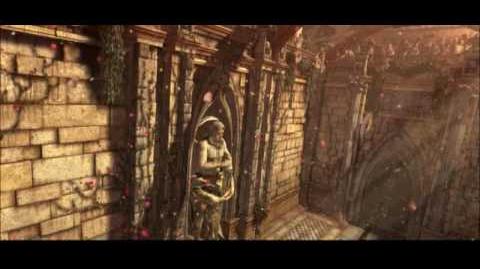 From her throne in the Royal Quarter, the banshee queen Lady Sylvanas Windrunner rules with the support of the dreadlord Varimathras (Bragor Bloodfist, post-Battle for the Undercity) and the ghostly Sharlindra. Other luminaries include Bethor Iceshard, who is a powerful wizard that heads the joint warlock and mage guilds in Undercity, and Master Apothecary Faranell of the Royal Apothecary Society.