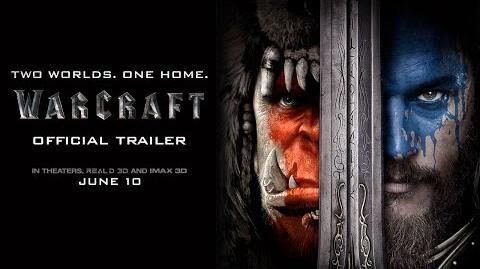 Today we got a chance to (re)watch the awesome

Warcraft trailer above and then were ushered into a private function with the director (Duncan Jones) and cast, hosted by Chris Hardwick (who is quick to say he doesn't know if Glenn is dead...). The trailer seemed far too short - only because we wanted more - but did a fabulous job showcasing what we could expect once the movie was released next summer.

The first was the sheer epic feel of what we've experienced over the years. Thankfully Duncan Jones himself is a Warcraft fan and presented the idea of making the movie as something that wasn't clearly good vs. evil and could be relatable to people who haven't touched Warcraft at all. He also wanted to be true to the feel and scope of the world. Of course, all this is old news, but seeing Stormwind or Westfall on screen, or seeing Durotan interact with Llane Wrynn I really illustrates his passion and dedication. The orcs are alive, Stormwind is sweeping, and the armor... well, the armor is huge, just as we'd expect.

Speaking to the former, Toby Kebbell (Durotan) talked for a good bit about the motion-capture aspect of playing an orc. In reality the actor is covered in little dots and wearing, for the lack of better description, green underwear. While it might seem silly and unrealistic, he had quite the opposite experience. He found it freeing - there was no focus on how he looked as an actor, or worrying about nuisance costuming. Instead he could focus everything into becoming Durotan, from posture to voice. Of course, Daniel Wu (Gul'dan) had the unfortunate task of adapting to Gul'dan's rather unique posture.

To the latter, the grand armor and large weapons, Dominic Cooper (Llane) joked about trying to fit into the armor designed for his character and, in some cases, wearing a lion helm. Until he got used to it, it was a bit uncomfortable at first. We know Blizzard and their epic shoulders, don't we? But that vastness helped with envsioning how the orcs would look and handle. The actors had little idea in the beginning how their actions and performances would translate over - we don't want an iteration of the Hulk, do we? - but standing in a room with gates even half their intended size, they could feel the power inherent in their characters. Of course, when working with Industrial Light and Magic, it really came as no surprise when one of the first "final" orcs was presented to them with all the motion-capture fit in and it ended up looking awesome. And let me say, just from that trailer, there's plenty of realness and empathy in those creatures.

Duncan, in discussing his vision of the movie and its universe, pointed out that Garona Halforcen (Paula Patton) really serves as the crux of the world's theme. Parts of both world are within her - orc and human - and she's able to see in a perspective that is completely unique and apart from them. He sought out Paula and presented her with the role, which she found absolutely amazing and challenging.

Speaking of Garona and the lore we all know - there is a small caveat with regards to lore. While every effort has been made - working closely with Chris Metzen - they found that early iterations and later iterations of the lore dealing with that time period actually either didn't fit together as well as it could, or even ran contrary. Chris chalks that up to the early days of gaming story and lore - across the board games during that time didn't focus hugely on lore, and a lot of it was very rough, just enough to get a story across. Over the years and with the success of WoW, that story has been expended and elaborated upon - but the downside is that sometimes the lore didn't quite jive. So they took great pains - together - to figure out what could and should be finessed.

Oh, and did I mention I recognized Ryan Robbins in that trailer? If you're a fan of scifi and fantasy, you might know him from the last two seasons of Continuum. Or maybe from Falling Skies. Either way, we're interested in knowing just who he's playing.