Vaelan is a level 55 elite quest giver found in Blackrock Spire. Though human in appearance, he is the red dragon Vaelastrasz in disguise. He first appears as a hostile mob but as soon as you approach him he will remove his disguise and talk to you in his human form.

You need to carry a

[Unadorned Seal of Ascension] in your inventory to be able to receive or hand in any quests.

In Cataclysm Vaelan can now be found right after entering Blackrock Spire and provides normal quests for the instance. He starts friendly and remains in his orc disguise.

"In decades past - of now ancient wars and conflicts - our kind was driven to the brink of extinction. Much we have endured, <race>. The onslaught of the Burning Legion. The Demon Soul. The Aspects divided. The ascension of Deathwing. The enslavement of our Queen, Alexstrasza, by the Dragonmaw. Through it all, we have been the unshakable will of the dragons - the undaunted force that has fought to represent our waning existance in this world."

Vaelan can be found on a platform above, to the left, just as one enters Hordemar City (Hordemar City is the first area of LBRS after the entrance-hall area). First, clear the immediate area. Then walk down the rock rumble and you will see a path leading straight upwards on the left. It can be dark here and difficult to see. As you approach him, he'll instantly turn into his human form.

Entering Hordemar, kill all enemies in the area and follow the path to the left.

Keep to the right. You can only get onto the ramp by passing the corner. 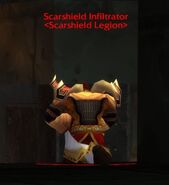 He will at first be disguised as a Scarshield Infiltrator, but will reveal himself as a human once you approach.
Add a image to this gallery