Val'kyr are a type of undead Vrykul, and seem to be a recent addition to the armies of the Scourge. They act as the Lich King's agents in the spirit world, being described by Thoralius the Wise as being "fearsome creatures made of pure nightmare" that "now stand watch over the realm of the elements".[2]

Val'kyr are created from the female vrykul dwellers of Valkyrion who accept the Lich King's "gift".[3] Valkyrion Aspirants can be found at Valkyrion as well as Nascent Val'kyr. At least one example exists of a female vrykul being turned into a val'kyr at another location as well.[4] Val'kyr serve as judges for vrykul combatants and decide which become vargul or ymirjar,[5][6] and also judge slain vrykul.[2]

Val'kyr Battle-maidens watch over fresh death knights in Acherus: The Ebon Hold alongside the Lich King. When death knights die in the instanced area of the Scarlet Enclave, they will come and resurrect the slain.

The Val'kyr were the ones who carried the souls of the worthy Vrykul from the Shadowlands to the Halls of Valor.[7] Odyn's plan was to create an army, the Valarjar, in order to protect Azeroth, because he didn't trust the Dragon Aspects. The Valajar were fallen Vrykul, whose souls were carried by the Val'kyr, fallen warrior women who had demonstrated courage. Helya was made the first Valk'kr against her will by Odyn. Meanwhile, the Titanic Watcher Loken, corrupted by the Old God Yogg-Saron, wanted to slay his brothers to protect himself. Loken wanted Helya to defeat Odyn, and she gladly accepted his call, wanting revenge for all the terrible things Odyn had done to her. Since then, she trapped Odyn in the Halls of Valor, and forms an army in her realm, Helheim, where the fallen, unworthy Vrykul are taken.

After the death of the Lich King, many val'kyr became "unemployed", and have been conscripted into the Forsaken ranks. In order to bolster the Forsaken's numbers, Sylvanas Windrunner has put them to work in resurrecting their dead enemies into their service, as explained to Warchief Garrosh Hellscream during a meeting in Silverpine Forest:

Players will learn the history of the val'kyr within the Halls of Valor. It has been said the val'kyr already encountered are not the "true" form.[citation needed] 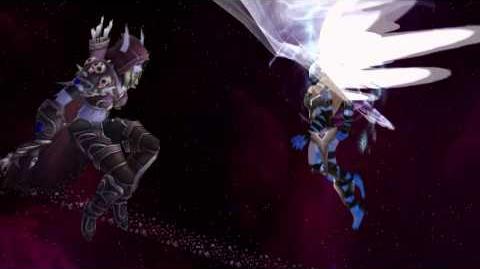 WoW Insider Know Your Lore: The mysterious connection between spirit healers and the Val'kyr by Anne Stickney Jun 19th 2011 at 6:00PM