Active
Valgarde is an Alliance settlement in Northrend.

Formerly the only established Alliance settlement in Northrend, Valgarde is the obvious arrival point for anyone traveling to Northrend. It is a rough seaport and you can find all races, occupations and characters floating through here. Valgarde is an excellent place to find information about Northrend in general, and to hire guides or buy equipment before setting out. It is also one of only two places in Northrend where you can hire passage off this ice-coated land, the other being Valiance Keep, back to warmer and more civilized continents. Of course, Drakkari trolls, furbolgs and occasional monsters attack the town frequently, but its strong walls never fail and the watchtowers provide ample warning.[1] At one point the settlement was led by Magistrate Randalvarr.[2]

Now, it is periodically attacked by a group of vrykul and their wolves called Dragonflayer Invaders, and by Proto-dragon riders raining fire from the sky.

Valgarde was founded by the humans and dwarves stranded behind on Northrend when Prince Arthas burned their ships, preventing them from returning to Lordaeron.[3]

Luc Valonforth was one of the higher-ranking officers in the army at the time, and could have been one of the founders of the town. Valgarde may be named after him.

The town may not have been founded by the survivors of Arthas' expedition. Vice Admiral Keller says that "We'd been here a month when those malformed giants appeared out of thin air."[4] If by 'we' he means the people of Valgarde, then they may not be what is left of Arthas' men at all, as the vrykul are newly appeared and it has been more than a month since Warcraft III: The Frozen Throne. He may mean 'we' as in the forces of Stormwind, but the town seems newly built, and there are no Lordaeron banners around, also pointing towards that they may not be Arthas' men. On the other hand, there are no Stormwind banners either, muddying the waters further. It also could mean that the vrykul had been besieging the town ever since Arthas abandoned them. That would mean that Valgarde has been versatile over the years in resisting the vrykul, and the vrykul have been awake for several years, but it is implied that this is not the case.

Valgarde appears to be similar to a Viking town from the concept art, this would make sense due to the fact Northrend's climate is similar to northern Scandinavia. It is most likely a reference to the Swedish town of Valsgärde, the site of a large number of Viking archaeological sites dating from the 6th - 8th centuries. 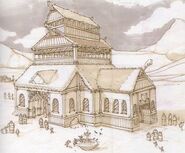 Valgarde Hall concept art in The Art of World of Warcraft

Valgarde from the World of Warcraft Collectors Edition DVD

Dock for arrival in Valgarde in WotLK Beta