Valley of the Four Winds

Edit this page
watch 01:40
'World of Warcraft Mists of Pandaria' Zone Preview Valley Of The Four Winds
Do you like this video?
Play Sound

Valley of the Four Winds

A tranquil plain of lush farmland, bordered by dense mysterious jungles along the south and impassible mountains to the north. The valley is considered the "breadbasket" of Pandaria, but the year’s harvest is in jeopardy and a terrible malaise has overcome the pandaren that live along the coast. The valley is also the home of the legendary Stormstout Brewery, where Chen Stormstout and his niece Li Li hope to journey to discover the whereabouts of their long-lost ancestors.[1]

The Valley of the Four Winds is a large zone and the second one in leveling for players after the Jade Forest. The northern part of the zone is mostly pandaren farmland and rice paddies and the south side consists of a long river and cliffs, with hills descending into the Krasarang Wilds. It has a dungeon called the Stormstout Brewery. The mantid make their presence known towards the end of the questing experience, where they are found breaching the wall that kept them confined to the Dread Wastes.

The Valley is located in the heart of Pandaria and is also its agricultural center. Players meet members of the Tillers faction here and help them with their crops. Gaining reputation will involve things such as planting and clearing fields. Players will also meet Chen Stormstout and assist him with clearing the Brewery.[2]

The majority of the Valley of the Four Winds consists of gently rolling hills along varying levels of elevation. There are numerous pools and marshes, as well as waterfalls that both spill into the Valley and cascade from the Valley into the Krasarang Wilds to the south. The heart of the Valley is where most of the pandaren farms and settlements are located.

The northern border consist of sheer cliffs, separating the valley from the Vale of Eternal Blossoms. A steep path cut through the mountain leads through the Veiled Stair to Kun-Lai Summit. The western border of the valley is sealed by the Great Wall, which has kept the mantid at bay for time immemorial.

The Yan-Zhe River cuts along the southern border, and a thin strip of land beyond consist of the Cliffs of Despair. Access to the Krasarang Wilds beyond can only be done at either end of the cliffs via steep slopes that roll their way downward.

There is only one forest within the valley, and that is in the northwest. Thick with bamboo, it is shrouded in dense fog.

Players will primarily make their way from the Jade Forest into the Valley. This can be done virtually anywhere along the due western border of the Jade Forest by crossing the waterway, though there is a proper bridge northwest of Nectarbreeze Orchard and southeast of Grookin Hill.

The Valley map, as presented at BlizzCon 2011.

Cutaway side view to give elevation change 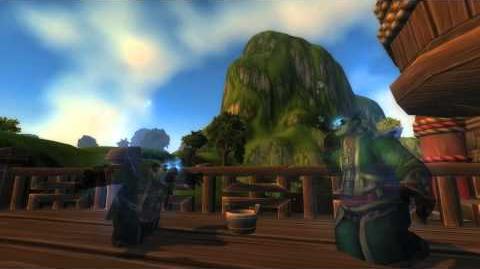 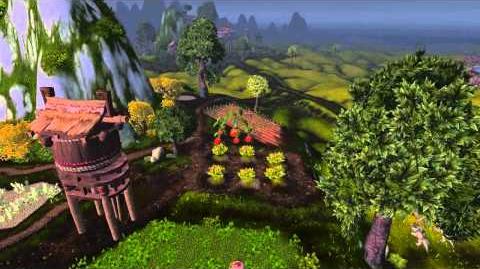 WoW Official Game Site (US) Valley of the Four Winds

WoW Official Game Site (US) Mists of Pandaria Zone Preview: Valley of the Four Winds by

BlizzPlanet Unyielding Fist: Trial of Stone – Valley of the Four Winds – World of Warcraft: Mists of Pandaria By Medievaldragon – April 20, 2012