Vanessa VanCleef is a bonus boss in the Deadmines, available only on Heroic difficulty.

Gauntlet: Use the valves to escape the forge. Run down the ramp, avoiding the flames, to fight Glubtok near the forge room exit door. Avoid the falling ice target areas. Once Glubtok is dead, fight Helix in the same place; ignore the spiders. Once Helix is dead, go through the door and avoid the spinning electrical beams. At the next door is Foe Reaper. Kill him and go through the door. From this point you will start to gain a stacking movement speed buff, so don't fall into the water. Kill the first group of worgen at the beginning of the dock, the second group at the end of the dock, and James Harrington (another worgen) on the scaffolding that leads up to the top deck.

Vanessa: Once back up at the top, engage Vanessa VanCleef. Kill all the adds that spawn. When she sets the explosives, run to the far side of the upper deck and click on a rope to swing out. As soon as you're back, hit her to stop Vengeance of VanCleef from stacking up. The explosives/rope swing/Vengeance cycle repeats one more time. At the end, when she gets down to low health, she'll set off a suicide bomb. Move to the edge of the upper deck and wait until she dies (anyone too close will be killed by the explosion).

The encounter begins in a gauntlet. First the players must release themselves from custody using the steam pressure vents before they will be cast down into the lava. After that the first nightmare sequence will start. The room will be filled with fire and the icicles (similiar to the ones from the Hodir encounter) will fall. The nightmare will shift when the players reach the exit door from the foundry and must eliminate the spider mobs. When done, the nightmare will shift again. Now players must reach the Ironclad Cove, avoiding the spinning spark walls and destroying red sparks on the way. Next, they must save the Harrington family members by killing a number of worgen attacking them. After that sequence the nightmare elixir will lose its grip upon the players.

Pull the boss to continue the fight. The second phase is pretty simple. During the fight, melee and caster adds will spawn and aid Vanessa. When she is reduced to 50% health she will flee and detonate the explosives on the ship. Players must escape using the ropes at the Side of the boat, where Ripsnarl was standing before he was pulled. The ropes have a mount arrow, and must be taken in order by players to avoid conflicts with rope choices. The ropes then swing players away from the boat which will then explode. The ropes will swing players back onto the boat, and at that point the boat will be on fire. Vanessa will announce that there is another set of charges about to explode, and players must take the ropes off the boat again and swing back. Once she is damaged down to 1% of her health, she will jump off to take her own life.

NOTE: If you are a druid, you MUST shift out of Cat/Bear/Moonkin form to use the ropes, otherwise you will get a 'cannot use this while shapeshifted' error and likely get killed by the bomb blasts. 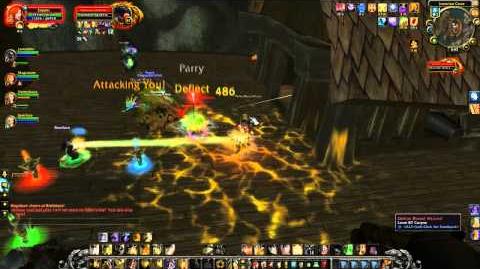 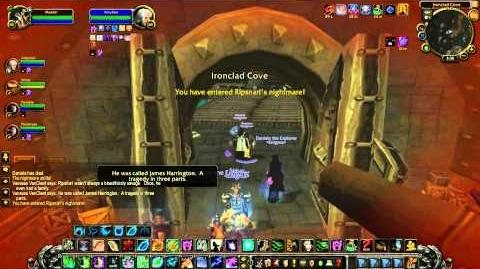