WoWWiki
Register
Don't have an account?
Sign In
Advertisement
in: Articles which are likely to change in Battle for Azeroth, Level ?? NPCs, Outdated sections,
and 12 more
English

Edit this page
watch 06:21
'World of Warcraft' Lore: Varok Saurfang
Do you like this video?
Play Sound

Leader of the Orcs of Durotar

elected Leader of the Orcs of Durotar

High Overlord of the Warsong Offensive
Leader of the Horde Expedition

High Overlord Varok Saurfang[3] was a legendary Horde warrior who is a veteran of the First, Second, and Third Wars. He was also a part of the Blackrock Clan, and was put second-in charge during the wars. He served as Supreme Commander of the combined war effort against Ahn'Qiraj in Kalimdor[4] and led the Kor'kron against the Scourge in Northrend. Saurfang was the leader of the Orcs of Durotar until he's killed by Sylvanas Windrunner during a Mak'gora in the front gates of Orgrimmar . This marks the end of the now known as Fourth War .

Varok Saurfang has served with the Horde as part of the Blackrock Clan ever since he drank the blood of Mannoroth alongside Grom Hellscream. Varok led forces in the sacking of Shattrath, Stormwind, and everything between, never losing in battle until the Horde was routed at the end of the Second War.

When Orgrim Doomhammer seized control of the Horde in the First War, he chose Varok Saurfang as his second-in-command after witnessing Varok's efficient and brutal tactics on the field. After the demonic bloodlust had been lifted from the orcs due to Grom Hellscream's sacrifice, Varok helped dozens of veterans come to grips with their previous atrocities, ultimately saving the lives of many great Horde soldiers.[5]

Varok went on to become a famed veteran of the First, Second, and Third Wars.

Although the Blood Curse drove him to murder many innocents, Varok refuses to use that as an excuse: like many others, he made the decision to drink freely. Drinking the blood and his actions under the blood curse haunt him, and to this day he deeply regrets both events. Although orcs are said to be fond of pork, the sound of swine being killed when they are ready for slaughter remind him of the death screams of the draenei children, and older veterans like Varok are often troubled by the memory. It disturbed Varok so deeply that he has refused to eat pork ever since. He will not shy away from war, or hesitate to defend his people and the Horde. However, he refuses to start a war, and if it is within his power, he will prevent a warmongering spirit from doing so. Whether through actions or by words, he will stop them anyway he can... no matter what.

His brother Broxigar traveled back in time to the War of the Ancients and died in glorious battle against the Burning Legion. Varok's mate apparently died around the time the Dark Portal opened and was cremated in Nagrand.[6] Their son Dranosh lived in Nagrand until Wrath of the Lich King.

Saurfang was initially stationed in Orgrimmar's Valley of Strength, where he enforced the rule of Warchief Thrall. He was the one who announced the death of Nefarian when his head was turned in.

During the Second War of the Shifting Sands, Saurfang travelled to the front lines in Silithus. He acted as the Supreme Commander of the Might of Kalimdor in the war against the silithid and their qiraji masters. The Might of Kalimdor was a success against C'Thun.

Saurfang is stationed in Warsong Hold as advisor to Garrosh Hellscream. He commands the Kor'kron Guard in Northrend and remains wary of the resurfacing bloodlust of the orcs, due to its employment in Hellscream's savage but successful tactics.

During the battle for Angrathar the Wrathgate, the main entrance to Icecrown, Dranosh Saurfang fell to the Lich King shortly before the treachery of Grand Apothecary Putress. Players bring Dranosh's shattered armor back to his father at the behest of Alexstrasza.

After the The Battle For The Undercity, Varok reminds Thrall, who is lamenting the broken peace between the Alliance and the Horde, of his duty to lead their people.

Once the undead form of his son (now called the Deathbringer) is defeated, Varok claims his body. He promises to give his son a proper burial in Nagrand, next to the pyres of his mother and ancestors.

In Cataclysm, Varok Saurfang, tired of Garrosh, remains in Warsong Hold as part of the Horde's Northrend skeleton crew and as the leader of the Warsong Offensive and the Horde Expedition.[8]

When Thrall and Varok arrived in Orgrimmar, they were stopped by General Nazgrim. The two of them went to the lair below the city where they fought against the mantid, during the fight, Varok was badly injured, but he survived the siege.

Upon the completion of the Horde Garrison (Frostwall), the High Overlord visits on occasion in order to direct the Commander of Horde Forces on Draenor, to various dungeons in order to vanquish potential threats and obtain plunder in the form of resources for the garrison.

High Overlord Varok Saurfang can be found during the Legion Invasions defending the Northern Barrens.

After the invasion of the Broken Shore, Saurfang is elected leader of the orcs of Durotar and can be found in Grommash Hold.

In A Good War

Saurfang continues to serve under Sylvanas, and one of his most important roles is the security of Orgrimmar. When Sylvanas meets with him to discuss strategy about also securing the future of the Horde by attacking the Alliance, he is hesitant at first, but becomes convinced by her logic. To that end, Sylvanas leaves him in charge of devising a plan that will allow the Horde to attack Teldrassil in order to drive a wedge between the Alliance nations.

Saurfang stations agents throughout Ashenvale, ready to strike at the night elven outposts when he gives the word. As they wait, he uncovers a ring of spies within Orgrimmar working for the Alliance. Rather than hunt them down, he decides to feed them false information instead, leading them to believe that not only is he disgusted and enraged with Sylvanas and Nathanos Blightcaller, but that the Warchief has ordered his troops to Silithus to safeguard the azerite.

The Alliance takes the bait, sending their fleet, and Saurfang leads the Horde to a victorious march through Ashenvale, only held up by the appearance of Malfurion Stormrage. In a final bid for victory, Sylvanas sends both he and Nathanos with a contingent of troops through Felwood in order to strike at Darkshore from the north. The tactic proves successful, and the Horde emerge the victors.

Sylvanas, in the final hours of the fighting, stands one-on-one against Malfurion. Saurfang comes upon them and, acting without thinking, strikes down Malfurion with a blow from behind. Sylvanas leaves him to behead the archdruid, but Saurfang hesitates, for he struck without honor. It is then that Tyrande Whisperwind arrives, incapacitating him to rescue her love.

Saurfang returns to Sylvanas without Malfurion's head, and in response to the archdruid's escape, she burns down Teldrassil rather than capture it. This leads Saurfang to denounce her actions as dishonorable.

The events of A Good War within Ashenvale and beyond play out in the War of the Thorns. After, Saurfang is seen atop the walls surrounding the ruins of Lordaeron, questioning his duty to his Warchief and considering giving himself over to the Alliance. Only the conversation he has with a troll stops him, reminding him of his duty to the Horde itself and not Sylvanas, per se. In the moment the Alliance open fire, he rushes back into the city to help defend it.

It is here that Anduin Wrynn retaliates for the attack on Teldrassil by assaulting the Undercity, and Saurfang is once again at the front lines. However, his faith in the Horde is further broken when Sylvanas uses her blight on Alliance and Horde soldiers, raising both into undeath. Saurfang remains dutiful in his fight against the Alliance, eventually captured to be thrown into The Stockade.

Even when the Horde infiltrate the prison, Saurfang refuses to escape with them, choosing to remain behind.

Becoming disgusted with Sylvanas' increasingly cruel and brutal reign, Saurfang turned to heroes both within the Horde and the Alliance to end her rule, culminating in a challenge of mak'gora at the gates of Orgrimmar, in which he was slain by Sylvanas' dark magic.[9]

Dialogue with Garrosh in Warsong Hold

Saurfang scolds Garrosh Hellscream's impatience and lust for killing, reminding him of their race's history during a strategy conference in Warsong Hold:

Dialogue during the Gunship Battle

Saurfang commands Orgrim's Hammer in a battle against The Skybreaker:

Dialogue during the Deathbringer Saurfang Battle 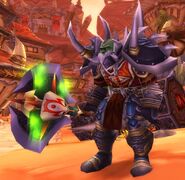 Saurfang doing what he does best 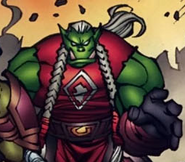 Saurfang, as represented in the official comic 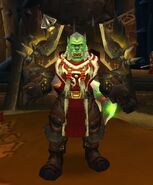 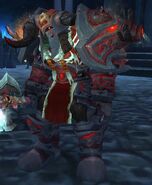 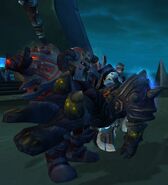 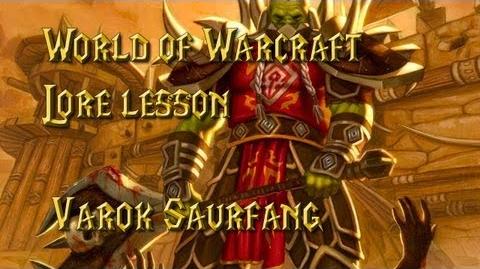 A portion or version of this article copied from