This article is about the

Velen in the alternate timeline of Draenor (accessed via redirecting of the Dark Portal by Garrosh). For the original timeline version, see Velen.
For the server of the same name, see Server:Velen US.

The Divine, Prophet of the Naaru, The Ageless One

Leader of the Draenei

This page concerns information regarding the version of Velen present in the alternate timeline on Draenor, the subject of the Warlords of Draenor expansion. For the current-timeline Velen who now resides in Azeroth, click here.

Differences from the original timeline Velen

It is assumed that both the original and this alternate version of Velen share a common history up to the moment Garrosh Hellscream saves his father Grom from dying at the hands of Mannoroth, as seen in the

Velen initially aids Alliance players when they reach Shadowmoon Valley, helping them establish their Garrison at Lunarfall. He continues working with players as they launch attacks on the Shadowmoon Clan and Ner'zhul.

After players help remove barriers which were preventing Velen's prophetic abilities, they share in a vision, witnessing the final attack on Karabor. In the vision, Karabor falls to the Iron Horde with the assistance of a dark Naaru named K'ara (also referred to as The Dark Star). In the vision, all of the Alliance and Draenei forces are killed including Velen himself.

Velen decides to make a preemptive strike against Ner'zhul in an attempt to stop him summoning "The Dark Star" and to avert the destruction of Karabor. Velen arrives at Light's Fall, where the adventurer has already engaged Ner'Zhul. Despite Velen's desperate plea to abandon his madness, Ner'Zhul refuses and completes the summoning ritual. As the Dark Star descends, Velen elects to become one with K'ara. Facing the destruction of his people and with no other option, he passes Yrel the Mark of the Naaru before striding towards the great beam of darkness. Upon contact, Velen's body is destroyed. However, his sacrifice purifies K'ara, converting the naaru back into a being of light and averting destruction. 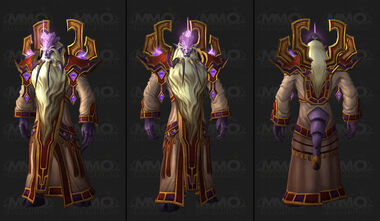 Warlords of Draenor model
Add a image to this gallery