<Ranger General of the Silver Covenant>

Vereesa Windrunner (nicknamed "Little Moon" by Alleria)[1] is an elven ranger who fought throughout the Second and Third Wars. She is the youngest sister of Alleria and Sylvanas, widow of Rhonin Redhair, and mother of Giramar and Galadin. After becoming a ranger, she had met Rhonin in an escort mission and together they helped free the Dragon Queen Alexstrasza from the Dragonmaw clan. Nearly all of Vereesa's extended family were killed by orcs in the Second War and in Prince Arthas's invasion of Quel'Thalas. Both of her sisters are alive, although Sylvanas is undead and Alleria's whereabouts were unknown until she was found on Argus.

Vereesa is a member of the prominent Windrunner family of the high elves. Her elder sisters Alleria and Sylvanas were Ranger Generals of Silvermoon City. She lost a younger brother, Lirath, and has at least one other brother. Her family lived at Windrunner Spire in the tranquil forests of Quel'Thalas.

During her early career, she was assigned by her superiors to escort the mage Rhonin to his ship at Hasic. This simple mission soon turned into a harrowing journey into Grim Batol where she eventually aided the mage in destroying the Demon Soul and freeing the Dragonqueen Alexstrasza. During this mission, Rhonin and Vereesa fell in love and they eventually married.

Following the success of the mission, Vereesa was asked to act as an Alliance Ambassador by King Terenas and the Kirin Tor. She and Rhonin were tasked with touring the Alliance and reminding everyone that there were other threats in the world besides orcs that would have to be faced sooner or later.[2] Along with Rhonin and Krasus, Vereesa was among the few well-known survivors of the Scourge that destroyed Lordaeron, Dalaran, and Quel'Thalas after the corruption of Prince Arthas.

The rest of her family was not so lucky. They were one of the hardest hit by the Scourge invasion into Quel'Thalas.[3] Sylvanas was killed by Arthas and raised as a banshee in his service, later becoming Banshee Queen of the Forsaken.[4][5] The sisters' grandfather had to battle his own son, their uncle, after he was turned into an undead. A younger brother was torn to pieces by their older brother who was then himself burned with the rest of the Scourge by elven resistance fighters.[3]

While she and her husband, Rhonin, were preparing for the birth of their twin offspring, Giramar and Galdarin, Rhonin was once again summoned by Krasus for help. As a reward for Rhonin's courage, Nozdormu allowed Rhonin to return to Vereesa at the moment she went into labor to ensure he would not miss a moment of the twins' lives. Nozdormu also offered the children the friendship of the bronze dragonflight. A human named Jalia assisted in the birth.[6] (WoE 17)Her cousin Zendarin, a blood elf who hated humans, tried to kidnap her children as he believed the offspring of a high elf and a human mage would have a lot of magic power.[7] (NotD 110, 113) He failed in this attempt.

She appears again in the novel Night of the Dragon, where she braved the depths of Grim Batol, seeking revenge on Zendarin. Zendarin sought to steal the Demon Soul (possibly as an alternate magic source having failed to take Dargonax, or as a secondary objective), the foul creation of Deathwing that had been destroyed by Rhonin years earlier. He would have pulled it off if not for Vereesa's intervention, which resulted in the destruction of the Demon Soul — and of Zendarin himself — when the stolen staff of the Naaru touched the artifact.[7] (NotD #?))​ Vereesa also assists Iridi, a draenei priestess, in destroying Dargonax, as redemption for Zendarin's murder of Iridi's comrade.

In the novel Jaina Proudmoore: Tides of War, she, Rhonin, and some of the Kirin Tor, along with many Alliance members, assist Jaina Proudmoore in protecting her beloved city Theramore from the destruction of the Horde. They had won the battle, until Garrosh used the Focusing Iris, the magical artifact of the blue dragonflight, to obliterate Theramore. Rhonin, at the last minute, opened a portal and shoved Jaina through, telling her that she was the future of the Kirin Tor. He called the Mana Bomb that was fueled by the Focusing Iris to himself so it would not hurt Vereesa who was looking around for Thalen Songweaver (who had betrayed the Kirin Tor during the war). Rhonin succeeded and Vereesa was not harmed. The only survivors of the mana bomb that rained down on Theramore were Jaina, Kalecgos (leader of the blue dragonflight), Vereesa, Shandris Feathermoon, and their scouting parties. They found that Rhonin had died. Jaina took over his place of the leader of the Kirin Tor.

Vereesa is located in the Violet Citadel of Dalaran along with Rhonin, Archmage Aethas Sunreaver, and Archmage Modera. She is the leader of the Silver Covenant, a militant group of high elves who oppose the inclusion of blood elves in the Kirin Tor. She is involved in the Quel'delar quest chain: The champions of the Silver Covenant will fight the forces of the scourge in the Frozen Halls and its Sunreaver counterpart in Dalaran to restore the magical blade Quel'Delar from its defiled state by the Blood-Queen Lana'thel.

She can be found outside Zul'Aman along with Halduron Brightwing and Vol'jin in order to stop the united troll empires. However, her presence in Quel'Thalas was not well received by Lor'themar Theron who sent a messenger who demanded to know why Vereesa entered their land. Upon hearing this, Halduron stated that he invited her personally and that as a Ranger-General he has the power to do so.

Veressa Windrunner is the right hand of Jaina Proudmoore in her assault on the Isle of Thunder. She is also leading the Silver Covenant against the Sunreavers in the purge of Dalaran. Vereesa's main reason for joining Jaina was Rhonin's death caused by the Horde.

On the Broken Isles, Vereesa united with Halduron Brightwing and Shandris Feathermoon in founding the Unseen Path, the union of all the hunters of Azeroth. When Vereesa found out about Alleria's location, she traveled to the Broken Shore to meet her.[citation needed]

At first, Vereesa was unaware of Sylvanas' fate.[6] (WoE 16-17) However, when she learned of her fate, Vereesa mourned her sister and was enraged when her cousin Zendarin recklessly called Sylvanas a Banshee.[7] (NotD 184)

Vereesa may have animosity towards the blood elves,[citation needed] but maintains the courtesy of her partnership with Rhonin, and has pride in high elf traditions. This can be seen in Night of the Dragon and in World of Warcraft: Wrath of the Lich King.

Vereesa shares most of her personality with her sister Sylvanas. She is competitive, a strategist, but she is less ruthless, and more trustable, although she did indeed consider joining the Horde, but ditched the idea because she didn't want to leave her children. She had turned slightly more harsh and grown more hatred for the Horde since the bombing of Theramore, but still loved her sister. The cause of her hate is mainly because of the death of her husband- Rhonin.

Silvermoon Messenger says: I bring word from the Regent Lord of Silvermoon.

Silvermoon Messenger says: Lord Lor'themar demands an explanation for the presence of this... exile in our lands.

Vereesa Windrunner says: Quel'Thalas is as much my home as it is yours and I would not see it fall to our ancient enemy. Now, you tell your cowardly regent --

Halduron Brightwing says: She is here at my invitation, courier. Most of my Farstriders are away and cannot be recalled easily. Vereesa's rangers know the land and are experienced combatants.

Silvermoon Messenger says: Lord Lor'themar does not concur with your reasoning, ranger-general. You have no authority to invite this --

Halduron Brightwing says: I am the commander of Silvermoon's defenses and I will seek assistance as I deem necessary!

Halduron Brightwing says: Now, Chieftain Vol'jin, before we were so rudely interrupted, you were telling us of the Zandalari's plans.

Vol'jin says: King Rastakhan, he be plannin' to unite da troll tribes under his Zandalari.

Vereesa Windrunner says: Including the Amani?

Vol'jin says: Da Amani, da Gurubashi, all 'o dem. He be dispatchin' emissaries to every tribe.

Halduron Bringwing says: My scouts have reported nothing but quiet outside Zul'Aman.

Vol'jin says: Rastakhan be callin' me his brother, but da Horde be our true brothers. We gotta stop him before he can sweet-talk the others into joinin' his empire.

Vereesa Windrunner says: So how are we going to deal with this alliance between the Amani and the Zandalari?

Halduron Brightwing says: We must prevent it from occurring in the first place.

Vol'jin says: Dat be da plan. My men be infiltratin' the city and learnin' what dey can about da new Zandalari warlord.

Vereesa Windrunner says: Halduron, we should combine our forces and make preperations to act on reports from the Darkspear scouts.

Halduron Brightwing says: Agreed. Messenger, you may carry word of our plans back to Lord Lor'themar, but make it clear that I will not tolerate any further interference.

Vereesa Windrunner in Day of the Dragon 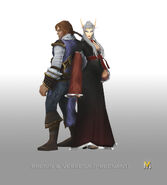