Edit this page
watch 05:41
'World of Warcraft' Lore: Vindicator Maraad
Do you like this video?
Play Sound

Vindicator Maraad was a highly respected Draenei paladin of the Alliance. He was also the uncle of Garona and great-uncle of Med'an.

Maraad rescued Garona from Theramore, and revealed that he was Garona's uncle (and therefore Med'an's great uncle). He explained that Gul'dan had bred Maraad's sister to one of his warriors, which resulted in Garona's birth. Once he had learned of Garona's birth, Maraad began his years-long search for his niece.[1] He eventually became a founding member of the New Council of Tirisfal.

In Wrath of the Lich King, Vindicator Maraad is stationed aboard the Skybreaker which is flying above Icecrown. He wields a [Hammer of the Naaru].

Maraad is a major character in the fifth expansion to World of Warcraft, Warlords of Draenor

In the Lords of War intros, it is revealed that he was present at the time Shattrath City was attacked by the demon-powered orcs. He witnessed its fall and the slaughter of his people. Tasked with escorting the last group of refugees from the carnage, he turned from this task when he saw an opportunity to claim vengeance. The refugees continued ahead with his assurance they would be safe, but when he looked to rejoin them, he found them slaughtered. His story and pleas prompt Varian Wrynn to make the call for the Alliance to storm the Dark Portal and meet the Iron Horde head-on.

Maraad plays a major role in helping the Alliance prepare to battle against the Iron Horde, which is composed of several of the most famous Orc chieftans of the past, as well as the remnants of Garrosh Hellscream's Orc separatist faction (the True Horde). Maraad is killed in action during The Battle of Shattrath on the parallel Draenor.

Though DC's site calls him "Marrad", the correct spelling of "Maraad" is used on the actual packaging.

Maraad as he appears in the comic. 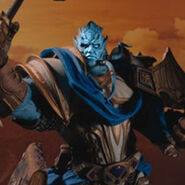 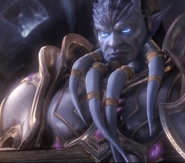 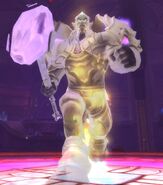 Maraad as a spirit in Auchindoun during Yrel's "Trial of Faith".