WoWWiki
Register
Don't have an account?
Sign In
Advertisement
in: Dalaran subzones, The Violet Hold, Instances,
and 2 more
English

The Violet Hold (previously known as dungeons of Dalaran)[1][2] is a prison complex located in Dalaran. It is the third instance to be located within the bounds of a capital city (after the Stormwind Stockade and Orgrimmar's Ragefire Chasm). The quest

[75] Discretion is Key, obtained from Rhonin at level 75, grants you [The Violet Hold Key] which is required to unlock the door to the instance. You can enter without the key so long as someone opens the door for you. The quest itself does not need to be completed in order to keep the key.

This dungeon used to be to the southeast of Silverpine Forest and to the north east of the Dalaran Crater,[1] but was moved with the city to Northrend.

Among the ornate spires and enchanted streets of Dalaran, the great Violet Hold stands as a testament to the glory of the city's rulers, the Kirin Tor. Yet within its mighty walls, a dark truth awaits.[3]

Filled with row upon row of deadly inmates, the hold has long been used to restrain threats to Dalaran.[3]

During the aftermath of the Third War, Lord Garithos caught the blood elves - led by Prince Kael'thas - consorting with Lady Vashj, and forging a desperate alliance with her naga. Garithos branded him a traitor and threw him in a magical cell in the dungeons underneath the city of Dalaran. Kael found himself confined in the prison until Vashj broke him out, during their escape they put to rest the souls of four archmagi: Antonidas, Conjurus Rex, Fordred Aran and Landazar. They found a furbolg and an ogre, which were experiments of the wizards of Dalaran and let them loose upon Garithos' guards. They also fought against some trapped undead and rescued the rest of the prisoner blood elves. Finally Kael'thas and the rescued blood elves killed Jailor Kassan, an old friend of Kael'thas, who guarded the exit to escape.[4]

After Kael'thas' escape the prison was diligently watched over by the Kirin Tor and it had enjoyed stability for many years… until now.[3]

In a sudden, violent assault, Malygos has unleashed his blue dragonflight upon Dalaran, hungry to reclaim arcane dominance over Azeroth. Utilizing a massive crack in the Violet Hold's roof, agents of the Dragon Aspect have begun pouring through portals within the prison, testing its integrity and risking the safety of everyone outside its walls.[3]

Overwhelmed by the audacious attack, the Kirin Tor has called upon heroes of the Horde and Alliance for assistance, seeking to put a swift end to the invasion. As brave adventurers rush to aid Dalaran, rumors circulate about the escalating ferocity of the battle.[3]

Violet Hold defenders seeking a brief respite from the ongoing offensive warn that the dungeon's vile inmates have begun escaping from their cells due to Malygos' reckless actions. And that, the guards caution, is only the beginning.[3]

So critical is his quest to destroy Dalaran, Malygos has sent Cyanigosa, one of his most powerful lieutenants, to ensure victory and guarantee that the city is destroyed, along with any who dare defend it.[3]

As the onslaught continues to chip away at the Violet Hold's defenses, only the brave souls protecting the prison stand between the continued existence of Dalaran and the city's utter annihilation.[3]

When you talk to Lieutenant Sinclari, she will use the Defense Control Crystal near the doors to kill all the mobs in the hold and leave with the guards, closing the doors behind her. Your group is left on their own to defend the hold.

Similar to the Black Morass instance, there will be 18 portals opening one after another. These portals spawn either a portal guardian which continuously spawns non-elite adds from the portal or a squad of elite dragonkin who do not spawn adds. Killing the guardian or the squad closes the portal. You must keep the spawns off the door, so that they don't break through. On the 6th and 12th portal, an unattackable dragonkin will spawn and open up one of the magically sealed prison cells, each containing a different boss. After you defeat the boss, you will get a small break to catch your breath before the event continues.

The most challenging portal trash spawn are the squads of elite dragonkin, which emerge in groups of 3-4. The champions have a knock-back ability, so tanking with your back against a wall is preferable. This is especially true since sorcerers are ranged and will not follow the tank backward, creating a potential aggro problem. For this reason, sorcerers should be downed first, and also because they will target random party members with arcane barrages.

The squads of elite dragonkin are especially difficult for the tank when they emerge from a portal in the middle of the balcony. Two mobs will run one way and two will run the other way, taking different staircases down to the dungeon's main floor. The ideal response is to be at the portal when they spawn, and establish aggro before they split. If you cannot be there in time, establish quick aggro on one side of the split group. Then, charge to one of the mobs on the other side, followed by taunt or ranged attack on the other mob. Alternatively, you can wait for them to meet again at the stairs near the instance door, but dps and heals should be alerted to wait.

On the 18th portal, you will fight Cyanigosa, the blue dragon in charge of the assault on the prison.

On Heroic, it awards approximately 1300 reputation.

Upon Death, one must fight through all waves, including the bosses, again. However, in Heroic mode, bosses that have already been defeated are replaced by mobs that are the same but differently named, and provide only 250 Reputation and no loot. In Regular, bosses which have to be fought again will drop loot normally. If only a single player or two dies without a wipe, they may simply enter the instance again as a ghost and speak with Sinclari outside the doors of the prison; she'll teleport the player inside the doors.

You will encounter three bosses in this dungeon, the first two being randomly selected out of this list of bosses:

Finally, you will always face

Cyanigosa as the 3rd boss.

Defeat Cyanigosa while the door's shield is still at 100% and no switches in the room have been used during her encounter.

Defeat Zuramat the Obliterator without killing any Void Sentries.

Defeat all of the random bosses on Heroic difficulty (this will require multiple runs, as only two of the possible six summon every lockout period).

Unique items fished up from the waters of Violet Hold (outside the instance): 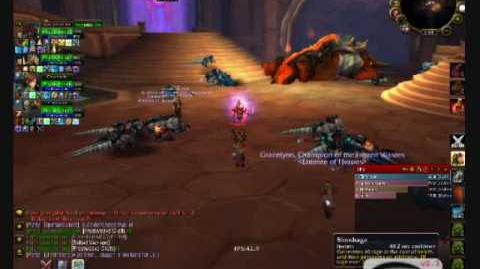