WoWWiki
Register
Don't have an account?
Sign In
Advertisement
in: Articles to clean up, Level ?? NPCs, Major characters,
and 15 more
English

<Warchief of the Horde>

, Warchief of the Horde, Leader of the Darkspear tribe

The shadow hunter Vol'jin, son of Sen'jin, chieftain of the Darkspear tribe, and rightful ruler of the Echo Isles, was a staunch ally of former Warchief Thrall. After the Echo Isles were conquered by the traitorous sorcerer Zalazane, he resided in Orgrimmar at the side of the Warchief, later fighting alongside him during the Battle for the Undercity. After years of exile, Vol'jin led an attack against the Echo Isles to end Zalazane's evil rule and retake the lands that Thrall had promised them.

Following Garrosh's defeat in the end of Mists of Pandaria, at Thrall's insistence, he assumed the role of Warchief of The Horde, the first non-Orc to do so.

During the attack on the Broken Shore he was pierced in the abdomen by a fel spear. Badly injured, he was taken back to Orgrimmar where he communed with the Loa who gave him a name, and as he drew his last breath in Grommash Hold, he named the new Warchief: Sylvanas Windrunner.

Vol'jin was the son and former apprentice of the troll witch doctor, Sen'jin, who was leader of the exiled Darkspear tribe, that lived on a small island chain in Stranglethorn Vale. During this time period, the Darkspear trolls were almost wiped out by a human invasion, as well as constant murloc raids. Only through the timely intervention of Thrall and the orcs did any of the trolls survive. Sen'jin died bravely on the islands trying to save his people. With Sen'jin's death, Vol'jin became chief Shadow Hunter for the tribe. In order to repay Thrall for saving his people, Vol'jin pledged his loyalty and service to the Horde.

Shortly after the orcs left, a large group of trolls also sailed for Kalimdor, but Vol'jin was not among them. Instead, Vol'jin chose to weather the Sea Witch's wrath with the rest of tribe until the time came when they could leave. Finally, a year later, they gathered up all the supplies they could and left for the new orc nation of Durotar.

During the Third War, those of the Darkspear Tribe who were present fought alongside the orcs against the Burning Legion, without the leadership of their chieftain, who was still on Darkspear Isles at the time. After the war, Vol'jin settled the tribe upon the Echo Isles, just off the shores of Durotar. It wasn't long before a new threat appeared, however, in the form of Grand Admiral Daelin Proudmoore's expeditionary fleet. Vol'jin aided Rexxar, Rokhan, and Chen Stormstout in evacuating the Darkspear tribe, turning the three into wyverns, allowing them to attack the Alliance fleet from above and supplying them with a squadron of troll batriders. Outnumbered, he was forced to retreat, but he continued to aid Rexxar and Rokhan through his wise counsel, instructing Rexxar to recruit the Tauren and the ogres in the fight against the humans.

After helping the Horde stop the human invasion, Vol'jin led his tribe back to the Echo Isles. It was not to last, however, as a witch doctor named Zalazane used dark magic to enslave many of his Darkspear brethren, forcing Vol'jin to order the retreat to the mainland for fear his whole tribe would fall victim to the mad witch doctor. Vol'jin then founded Sen'jin Village along the southern coast of Durotar as a base with which to strike back at Zalazane. However, he was called to Orgrimmar to aid Thrall, leaving the recapture of his people's home to Master Gadrin. Though raids by the Kul Tiras Marines persisted in the Barrens and Durotar, these invasions were lesser threats and not directly aimed at Sen'jin Village.

Vol'jin resided at Thrall's fortress in Orgrimmar, assisting the Warchief with sound advice and witty stratagems, such as the capture of Trol'kalar for use against the trolls of Stranglethorn, all the while guiding his people to a better future.

During Brewfest, Vol'jin would ride out of the city to the festival grounds at 6 a.m and 6 p.m each day for the ceremonial tapping of the keg. Players present when he did this would receive a two hour Brewfest Enthusiast buff that increased experience gained by 10%.

Vol'jin was called upon to serve during the Battle for the Undercity. He maintained his position outside the gates of the Ruins of Lordaeron atop his raptor with the artillery and several grunts, until Thrall and Sylvanas Windrunner arrived. There he remained to send any adventurers that followed after the Warchief to help reclaim the Undercity.

The Glory of the Darkspears

After many attempts by adventurers to reclaim the Echo Isles, Vol'jin had come up with a plan to defeat Zalazane and reclaim the isles for the Darkspear Trolls. For this plan to succeed, he sought aid from the Loas that had still helped the Darkspear, and from other Horde members.[1]

Vol'jin was removed from Orgrimmar in Cataclysm.[2] He appeared on the reclaimed Echo Isles, renamed Darkspear Isles, the new troll starting zone. He was involved with many of the troll starting area quests, one of which where he showed a vision of himself and Garrosh Hellscream, the new Warchief of the Horde, talking in a previous encounter in Grommash Hold, using some sort of incense over a brazier. He was also present at the Elemental Invasion meeting.

With the tension of the Horde arising, Vol'jin began to consider resigning the Darkspear Trolls from the Horde entirely, though he knew that the decision would not be the best.

Garrosh and Vol'jin had another clash of opinions about Garrosh's decisions at Domination Point, resulting in Garrosh ordering Vol'jin's murder, under the ruse of Vol'jin being sent on a mission with Kor'kron. Luckily, Vol'jin survived and told adventurers to report his "death" to Garrosh, and to find other members of the Horde who would stand against Hellscream, including Baine Bloodhoof. Some time after, Vol'jin was caught in a river, but was rescued by Chen Stormstout. Chen and adventurers helped Vol'jin regain strength, and he sent them to find Thrall. In Vol'jin's absence, Thrall stood with the Darkspear trolls who were under martial law by the Kor'kron. Vol'jin received a letter from Baine in which he says that, "Garrosh is capturing the mogu and using sha energies." Vol'jin told adventurers that they should keep Baine away from the Warchief, because Garrosh was not trusting of him.

Vol'jin earned Lor'themar Theron's support in overthrowing Garrosh Hellscream. Upon returning to Kalimdor, Vol'jin learned that his people were put under a martial law by the Kor'kron. After speaking with Thrall and Chen, Vol'jin sent adventurers to gather Kor'kron supplies from Northern Barrens. Shortly after receiving supplies, Garrosh's forces began an attack on Sen'jin Village. After a fierce battle, the village was secured and invaders were pushed back. Vol'jin planned to free Razor Hill from Garrosh's Kor'kron, and Thrall left to Orgrimmar in order to find orcs like Varok and Eitrigg who would stand with him against Hellscream.

Vol'jin and his forces successfully eliminated Kor'kron presence from Razor Hill. People of Razor Hill joined the rebellion. Baine Bloodhoof and Vol'jin discussed their plans in overthrowing Garrosh. Baine told him that, "Orgrimmar became a fortress, and that they should look out for allies beyond the Horde." Soon after, the Darkspear Rebellion was approached by the Alliance and, together, they formed a union.

Vol'jin arrived to The Inner Sanctum upon Garrosh's defeat. He told Thrall that, "The Horde needs its true Warchief now, more than ever." Thrall agreed, claiming that it was Vol'jin who had held the Horde together in the dark times of Hellscream's reign, and that he should be the one to lead them all. The other Horde leaders agreed, and the decision was made.

A few moments later, Varian approached the Horde leaders, demanding to speak with the Warchief. He was briefly shocked to see Vol'jin as the new Warchief, but quickly returned to his usual stoicism. The king of Stormwind stood before Vol'jin and said that, while he desired the peace encouraged by his son, Anduin Wrynn, if it transpired that the troll's reign as Warchief became as deadly and tyrannical as that of Garrosh, that the Alliance will "end him."

Vol'jin sent a group of Shadow Hunters to Draenor (including Rokhan).

During the invasion of Azeroth by the Burning Legion, Vol'jin led the contingent of Horde forces alongside the Alliance armada headed by King Varian Wrynn in the initial attempt to repel the demons. During the battle on the Broken Shore, however, Vol'jin was stabbed through the torso by a demon. Mortally injured, he demanded of Sylvanas that she not let the Horde die in that moment. As part of her ongoing machinations, Windrunner seized upon the moment and called for a withdrawal of Horde forces from the battle, leaving the Alliance sorely exposed on the battlefield.

The Val'kyr commanded by Sylvanas ushered Vol'jin and the Horde survivors of the battle to Orgrimmar, where he sat for the final time upon the throne of the Warchief. Upon returning to his seat of power, Vol'jin communed with the spirits, who bestowed upon him the name of his successor: Sylvanas. Despite the clear shock of his fellow Horde leaders, Vol'jin demanded that the will of the spirits be followed, and with his final breath, he bestowed his blessing upon Sylvanas and encouraged her to take up the mantle of Warchief. She accepted this burden and occupied the throne within the day, asking of her former compatriots which of them sought vengeance in Vol'jin's name.

Little is known about Vol'jin's personality. Vol'jin was the only racial leader of the Horde to whom Thrall has given the distinction of requesting his presence at Grommash Hold. Vol'jin has also been shown to be very loyal, staying at the former Warchief's side despite the troubles faced by his tribe.

It also seems that Vol'jin is a very powerful Shadow Hunter, using voodoo to transform Rexxar, Rokhan, and Chen Stormstout into invisible wyverns, a feat which has never been seen before.

According to information gleaned from the quest The Admiral's Orders, he has a distrust of humans. However the dialogue was simply copy and pasted from Nazgrel who used to end the quest.[3]

Vol'jin is very patient and most see that as a weakness, but Vol'jin's strategies never fail.

Tapping of the Keg at Brewfest

Zalazane's Fall
Sons and daughters of da Darkspear! Friens of da tribe!
We be gatherin' here, on da shores of Sen'jin Village, to be takin' BACK what is ours!
Come, now! Join da liberation of da Echo Isles! Zalazane will FALL!
We be gettin' ready to march to de Isles, an' FREE dem of Zalazane's wicked rule! Join me!
Zalazane's time has come! De Darkspear will have a proper home again. Be ready!

Sylvanas says: In the end, death claims us all...but the Horde will live on.

Vol'jin says: I have never trusted you! Nor would I have ever imagined, in our darkest time... that you would be the one to save us. The spirits have granted me clarity... a vision. They whisper a name. Many will not understand, but you must step outta da shadows... and lead. You must... be... Warchief... 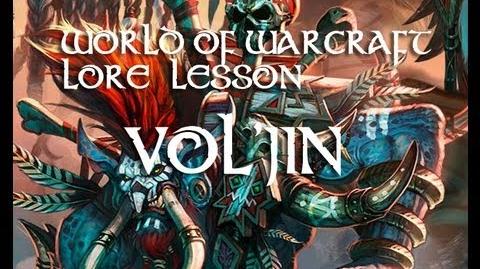 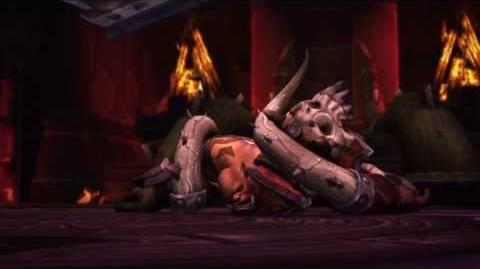 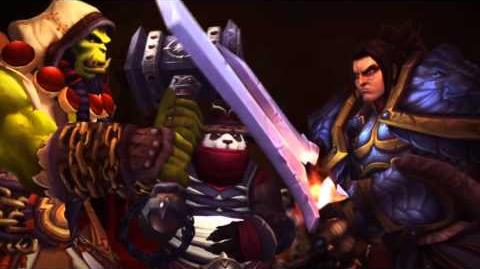 WoW Official Game Site (US) The Characters of Warcraft > Vol'jin