Were you looking for the in-game book, The War of the Ancients? Or info on the speculated future raid instance?

The War of the Ancients is a conflict that rocked ancient Azeroth some ten thousand years prior to the First War. It started when the reckless Highborne drew the attention of Sargeras and his Burning Legion, and was ended, after massive casualties, when the Well of Eternity blasted the supercontinent of Kalimdor apart.

There are differing accounts of the War:

Many thousands of years ago (10,000 years before Warcraft I) the Burning Legion became attracted to the world of Azeroth due to the reckless use of magic on that world. The night elf "Highborne", under the direction of the Night Elf queen Azshara and her counselor Xavius, had been undertaking experiments to draw greater and greater amounts of energy from the Well of Eternity, the source of magical power on Azeroth.

The Highborne's reckless use of magic sent ripples of energy spiraling out from the Well of Eternity and into the Great Dark Beyond. The streaming ripples of energy were felt by terrible alien minds. Sargeras — the Great Enemy of all life, the Destroyer of Worlds — felt the potent ripples and was drawn to their distant point of origin. Spying the primordial world of Azeroth and sensing the limitless energies of the Well of Eternity, Sargeras was consumed by an insatiable hunger. The great dark god of the Nameless Void resolved to destroy the fledgling world and claim its energies as his own.

Sargeras gathered his vast Burning Legion and made his way towards the unsuspecting world of Azeroth. The Legion was composed of a million screaming demons, all ripped from the far corners of the universe, and the demons hungered for conquest. Sargeras' lieutenants, Archimonde the Defiler and Mannoroth the Destructor, prepared their infernal minions to strike.

Queen Azshara, overwhelmed by the terrible ecstasy of her magic, fell victim to Sargeras' undeniable power and agreed to grant him entrance to her world. Even her Highborne servitors gave themselves over to magic's inevitable corruption and began to worship Sargeras as their god. To show their allegiance to the Legion, the Highborne aided their queen in opening a vast, swirling portal to Sargeras' realm within the depths of the Well of Eternity.

Once all his preparations had been made, Sargeras began his catastrophic invasion of Azeroth. The warrior-demons of the Burning Legion stormed into the world through the Well of Eternity and laid siege to the night elves' sleeping cities. Led by Archimonde and Mannoroth, the Legion swarmed over the lands of Kalimdor, leaving only ash and sorrow in its wake. The demon warlocks called down searing Infernals that crashed like hellish meteors into the graceful spires of Kalimdor's temples. A band of burning, bloodletting killers known as the Doomguard marched across Kalimdor's fields, slaughtering everyone in their path. Packs of wild, demonic Felhounds ravaged the countryside unopposed. Though the brave Kaldorei warriors rushed to defend their ancient homeland, they were forced to give ground, inch by inch, before the fury of the Legion's onslaught.

It fell to Malfurion Stormrage to find help for his beleaguered people. Stormrage, whose own brother, Illidan, practiced the Highborne's magics, was incensed by the growing corruption amongst the upper class. Convincing Illidan to forsake his dangerous obsession, Malfurion set out to find Cenarius and muster a resistance force. The beautiful young priestess, Tyrande, agreed to accompany the brothers in the name of Elune. Though Malfurion and Illidan shared a love for the idealistic priestess, Tyrande's heart belonged to Malfurion alone. Illidan resented his brother's budding romance with Tyrande, but knew that his heartache was nothing compared to the pain of his magical addiction.

Illidan, who had grown dependent on magic's empowering energies, struggled to keep control of his nearly overwhelming hunger to tap the Well's energies once again. However, with Tyrande's patient support, he was able to restrain himself and help his brother find the reclusive demigod, Cenarius. Cenarius, who dwelt within the sacred Moonglades of distant Mount Hyjal, agreed to help the night elves by finding the ancient dragons and enlisting their aid. The dragons, led by the great red leviathan, Alexstrasza, agreed to send their mighty flights to engage the demons and their infernal masters.

Cenarius, calling on the spirits of the enchanted forests, rallied an army of ancient tree-men and led them against the Legion in a daring ground assault. As the night elves' allies converged upon Azshara's temple and the Well of Eternity, all-out warfare erupted. Despite the strength of their newfound allies, Malfurion and his comrades realized that the Legion could not be defeated by martial strength alone.

As the titanic battle raged around Azshara's capital city, Suramar, the delusional queen waited in anticipation for Sargeras' arrival. The lord of the Legion was preparing to pass through the Well of Eternity and enter the ravaged world. As his impossibly huge shadow drew ever closer to the Well's raging surface, Azshara gathered the most powerful of her Highborne followers. Only by linking their magics together in one focused spell would they be able to create a gateway large enough for Sargeras to enter.

Malfurion, convinced that the Well of Eternity was the demons' umbilical link to the physical world, insisted that it should be destroyed. His companions, knowing that the Well was the source of their immortality and powers, were horrified by the rash notion. Yet Tyrande saw the wisdom of Malfurion's theory, so she convinced Cenarius and their comrades to storm Azshara's temple and find a way to shut the Well down for good.

Knowing that the Well's destruction would prevent him from ever wielding magic again, Illidan selfishly abandoned the group and set out to warn the Highborne of Malfurion's plan. Due to the insanity brought on by his addiction and the stinging resentment towards his brother's love of Tyrande, Illidan felt no remorse at betraying Malfurion and siding with Azshara and her ilk. Above all else, Illidan vowed to protect the Well's power by any means necessary.

Heartbroken by his brother's departure, Malfurion led his companions into the heart of Azshara's temple. Yet as they stormed into the main audience chamber, they found the Highborne in the midst of their final dark incantation. The communal spell created an unstable vortex of power within the Well's turbulent depths. As Sargeras' ominous shadow drew ever closer to the surface, Malfurion and his allies rushed to attack.

Azshara, having received Illidan's warning, was more than prepared for them. Nearly all of Malfurion's followers fell before the mad queen's powers. Tyrande, attempting to attack Azshara from behind, was caught off-guard by the queen's Highborne guardsmen. Though she vanquished the guardsmen, Tyrande suffered grievous wounds at their hands. When Malfurion saw his love fall, he went into a murderous rage and resolved to end Azshara's life.

As the battle raged inside and outside the temple, Illidan appeared from the shadows near the shores of the great Well. Producing a set of specially crafted vials, Illidan knelt and filled each with the Well's shimmering waters. Convinced that the demons would crush the night elves' civilization, he planned to steal the sacred waters and keep their energies for himself.

The ensuing battle between Malfurion and Azshara threw the Highborne's carefully crafted spellwork into chaos. The unstable vortex within the Well's depths exploded and ignited a catastrophic chain of events that would sunder the world forever. The massive explosion rocked the temple to its foundations and sent massive quakes ripping through the tortured earth. As the horrific battle between the Legion and the night elves' allies raged around and above the ruined capital city, the surging Well of Eternity buckled in upon itself and collapsed.

The resultant catastrophic explosion shattered the world and blotted out the skies (see The Great Sundering).

As the aftershocks from the Well's implosion rattled the bones of the world, the seas rushed in to fill the gaping wound left in the earth. Nearly eighty percent of Kalimdor's landmass had been blasted apart, leaving only a handful of separate continents surrounding the new, raging sea. At the center of the new sea, where the Well of Eternity once stood, was a tumultuous storm of tidal fury and chaotic energies. This terrible scar, known as the Maelstrom, would never cease its furious spinning. It would remain a constant reminder of the terrible catastrophe... and the Utopian era that had been lost forever.

Somehow, against all odds, Queen Azshara and her Highborne elite managed to survive the ordeal. Tortured and twisted by the powers they had released, Azshara and her followers were dragged down beneath the raging sea by the Well's implosion. Cursed — transformed — they took on new shapes and became the hateful, serpentine naga. Azshara herself expanded with hate and rage, becoming a massive monstrosity, reflecting the wickedness and malice that had always hidden within her core.

There, at the bottom of the Maelstrom, the naga built for themselves a new city, Nazjatar, from which they would rebuild their power. It would take over ten thousand years before the naga would reveal their existence to the surface world.

According to an interview with Tom Chilton, which took place on June 8th, 2010, War of the Ancients was said to be a Caverns of Time raid instance released some time during the World of Warcraft: Cataclysm patch cycle.[1] A raid of that name never materialized, but a 5-man dungeon with a partial and similar description was implemented in Patch 4.3 called Well of Eternity. 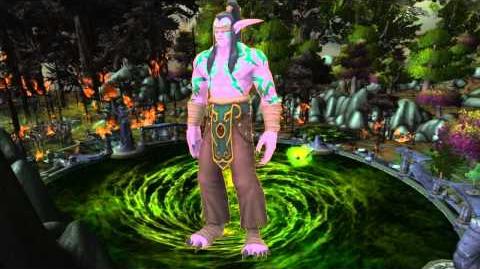 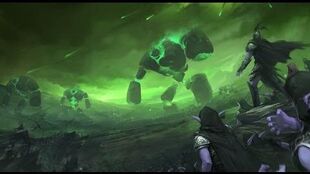