Warcraft: Orcs & Humans (or Warcraft I) was the first game in the Warcraft series. It was released in 1994, quickly becoming a best selling game, and was one of the original Real Time Strategy games.[1] It features two races; the humans of the kingdom of Azeroth, and the invading orcs of the Horde. The game is now out of print and the demo that was available on Blizzard Entertainment's Warcraft: Orcs & Humans homepage was removed after the site was updated.[2] There was a CD re-release, namely version 1.21 (CD version), that didn't have the word-from-the-user-manual copy protection of prior versions.[citation needed]

Note: DOS BOX may be needed if you attempt to run the DOS based game.

On March 28th, 2019, GOG.com released a digital version of the game, either sold seperately or bundled with Warcraft II: Battle.net Edition .

Warcraft has not only become a classic, winning many awards, but has also set new standards for multiplayer games. Set in the mythic kingdom of Azeroth, players are given the task of maintaining a thriving economy while building a war machine with which to destroy the enemy.[1]

By playing either the Humans or the Orcs in this saga, two separate story lines evolve with 12 scenarios per side telling the tale of the battle for Azeroth. From swords to sorcery, all the elements of classic fantasy are here to explore: rich forests, dark dungeons, and bubbling swamps await the stalwart troops amassed to fight for dominance.[1]

The player can command many unique armies and creatures including Knights, Archers, Clerics, Warlocks, Demons, Elementals, and The Dead.[1]

The multiplayer aspects of the game bring Warcraft to a new level of excitement. A player can challenge another on over 20 custom maps and determine who is the supreme warlord. Head to head play is supported over modem, serial link, and IPX networks, and works cross-platform with both the IBM-PC and Macintosh versions.[1]

This title had great a part of its history retconned with later games. For a list of changes, see here.

The orcs originated from the world of Draenor, where they were corrupted by the Burning Legion to form the Horde. They slaughtered the other races of their planet, but sought further conquests. Their leader, Gul'dan, joined forces with the Last Guardian, Medivh, who had been corrupted by the demon lord Sargeras, to open a portal to another world called Azeroth.

Ultimately, the Horde was victorious, and the surviving Humans fled across the sea. 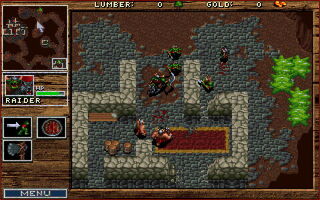 Screenshot of an orc campaign in Warcraft: Orcs & Humans. 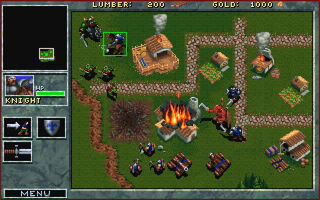 Screenshot of a human campaign in Warcraft: Orcs & Humans. 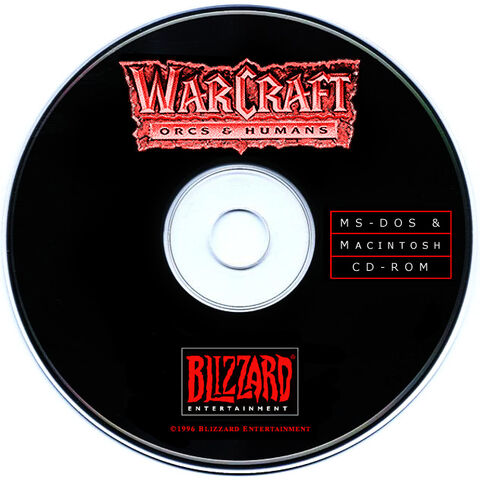 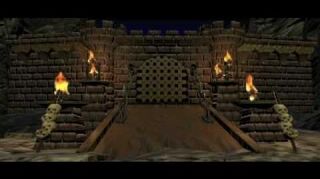 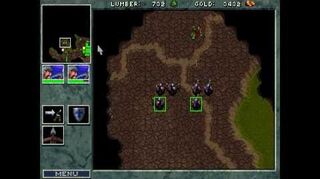 Blizzard Entertainment (US) LEGACY GAMES (US)