Warcraft III: Reign of Chaos is a computer game released by Blizzard Entertainment on July 3 2002.[1] It is a real-time strategy computer game,[1] the second sequel to Warcraft: Orcs & Humans and the third game set in the Warcraft universe.

It details the second invasion of the Burning Legion and the origins of the Scourge, along with the fall of Lordaeron and the awakening of the night elves.[2] In addition, the orcs leave the Eastern Kingdoms, and on their journey to Kalimdor, save the Darkspear trolls from destruction.[3] When they arrive, they also assist the tauren and officially form the Horde as a collective of these races.[2]

The game proved to be one of the most anticipated and popular computer game releases ever, with 4.5 million units shipped to retail stores and over one million units sold within a month.[4] Warcraft III won many awards including "Game of the Year" from more than six different publications.[5]

One of the main innovations Warcraft III offers over the previous games in the series is the way the role of hero units has changed. Where before, heroes were merely very powerful variants of standard units, now they are unique, with their own special abilities that normal units do not have access to. For instance, heroes within the game can find or trade items to increase skills, defense, etc. With each kill of an enemy of a certain level the heroes gain experience points, eventually resulting in increased levels of their own, and new spell options (thus introducing role-playing game elements to the series).[6] Some heroes also can apply beneficial auras to allied units.

Another new innovation is the addition of creeps, which are computer controlled characters the player fights even in multiplayer. They guard key areas or neutral buildings and are designed to act as a resource for the players to kill to provide experience points to a player's hero and to provide hero items. The idea is to force the player to be aggressive instead of "turtling up" (building up powerful defenses and rarely attacking).[7]

Within the game there are four races at war: the Human Alliance and the Orcish Horde, who also appeared in Warcraft: Orcs & Humans, Warcraft II: Tides of Darkness, and Warcraft II: Beyond the Dark Portal, along with two new character teams, the night elves and the undead.[8] As an April Fool's joke before the game was released, Blizzard announced that the pandaren would be the fourth race. The company didn't reveal the night elves until a month later, and pandas are a running gag in Warcraft now (to the point that a pandaren Hero — called the Brewmaster — was available in the expansion pack, Warcraft III: The Frozen Throne, and pandaren heads were featured on the glaives of Illidan and the rest of the Demon Hunter hero class).[9] A fifth playable race, the Burning Legion, was changed during play-testing to a set of non-player characters and monsters (with a playable "cameo" on the last level of the undead campaign, as Kel'Thuzad summons Archimonde).

Players meet other players over the Internet to set up multiplayer games via Blizzard's free Battle.net service, or may play against the computer.[10]

Warcraft III also includes a very thorough scenario editor called World Editor. It uses a scripting language similar to the trigger system used in Starcraft. As well as providing the ability to edit any aspect of the units, buildings and spells, it has such advanced features as custom tilesets, custom cinematic scenes, dialog boxes, variables, and weather effects. Many custom maps, featuring a large variety of gametypes continue to be developed, and together with the expansion pack have contributed to the longevity of the game.[11]

A game demo for Warcraft III: Reign of Chaos also exists, the Warcraft III Demo, it includes the tutorial and prologue campaign.

The story in Warcraft III: Reign of Chaos is told through all four races in a progressive manner, in a similar way to how StarCraft was told. The order is human, undead, orc, and night elf.

Prologue: Exodus of the Horde

Main article: Exodus of the Horde

The young Thrall awakes fom a strange vision, directing him to the prophet Medivh. Medivh tells him to rally the orcs from Lordaeron and travel to Kalimdor, where they shall meet their destiny. He frees the orcs from the remaining internment camps, including Grom Hellscream. The Horde steals the human fleet from Southshore and sail off. Near the Maelstrom, they are forced to land on a small island to repair their ships. There they are joined by the Darkspear Trolls, led by Sen'jin, but are soon ambushed and captured by a group of murlocs worshiping a Naga Sea Witch. Thrall and his people need to escape from their underworld prison together with the trolls and flee from the island before it is destroyed by an erupting volcano.

Human Campaign: The Scourge of Lordaeron

Main article: The Scourge of Lordaeron

Prince Arthas, a paladin of the Silver Hand, The Captain and Jaina Proudmoore, Arthas' former lover and apprentice-Archmage, are investigating a strange plague that is spreading across the lands of Lordaeron. To their horror, they find that the plague turns unsuspecting people into hideous Undead warriors, and must move to stop the undead's plans. After a string of hollow victories (many towns in the now Plaguelands being destroyed), Arthas decides that the best way to end the game was to destroy Mal'Ganis the (supposed) leader of the scourge. Mal'Ganis travels northward to the icy lands of Northrend, and Arthas follows him. There he aids an old friend, Muradin Bronzebeard, who tells him of a powerful weapon, a sword called Frostmourne. Arthas obtains Frostmourne, at the (supposed) cost of Muradin's life, and uses it to defeat Mal'Ganis. However, as a result, Frostmourne steals Arthas' soul and turns to ally the undead...

Undead Campaign: Path of the Damned

Main article: Path of the Damned

With their new leader, the undead must move to complete their purpose in Lordaeron, which is to destroy the remnants of the Alliance and pave the way for a new invasion. In a series of quests, Arthas succeeds in reviving a former adversary, Kel'Thuzad, as a Lich, and the two successfully open an inter-dimensional portal for the true masters of the Scourge, the Burning Legion, to enter the realm of Azeroth (see the article on Arthas for a more detailed description).

Orcish Campaign: The Invasion of Kalimdor

Main article: The Invasion of Kalimdor

After escaping Human captivity and fleeing to the shores of Kalimdor, orcish warchief Thrall must lead his brethren to safety and ensure their survival in this strange and hostile land. Help comes from the Tauren, a nomadic group of Kalimdor natives, and their leader, Cairne Bloodhoof. Unfortunately, fellow orc Grom Hellscream falls under demonic corruption, and Thrall is forced to ally himself with Jaina Proudmore, now leader of the survivors of Lordaeron. He also discovers (courtesy of an oracle) that his fate is to help repel the Burning Legion, and he and Jaina accomplish this goal, and also to save Hellscream. Afterwards, Grom insists upon battling Mannoroth, the demon who cast him into the corruption. Thrall and Grom succeed in vanquishing Mannoroth, but Grom is slain in the process.

With the coming of the undead and Burning Legion as well as the humans and orcs, Tyrande Whisperwind and her night elf Sentinels fight a desperate battle to save their beloved home of Kalimdor. She first reawakens her lover, Malfurion Stormrage, and then the Druids of the Talon and finally the Druids of the Claw. She also decides to free the great betrayer, Illidan Stormrage, and he is eventually instrumental in weakening the Legion. Finally, she and Malfurion join forces with Proudmoore and Thrall to delay the Legion's advance until a proper end can be arranged for their leader Archimonde (mirroring the final mission of Starcraft, in which the player commands a multi-racial force against a common foe).

Unlike other RTS games, Warcraft III has introduced a new element of game play, special units called heroes, they are super units that have special abilities that expand as the game progresses (as they gain experience).[6] For example, an Archmage hero can acquire the ability to (temporarily) summon water-elementals, increase the mana regeneration rate of surrounding magic casting units, create a blizzard over enemy units, and teleport friendly units to other parts of the map. In the course of a game a maximum of up to three heroes can be built, but if they die, they can be revived at an altar.

The upkeep is a gameplay concept that keeps armies small as it penalizes anyone who gets big too fast. With the Heroes occupying five food cap and the upkeep that force you to have low food cap it is difficult to win through sheer numbers, and micromanagement becomes more important, as a result the gameplay is more tactical than strategical.

There are strong distinctions in the game between melee and ranged units; between air and ground units; and (particularly in Warcraft III: The Frozen Throne) between mundane, magical, and antimagic units. Antimagic units, such as the Spell Breaker (only in the expansion pack) and the night elves' Dryad, have the ability to cancel the effects of magic spells cast on other units.

The strategy board game Warcraft: The Board Game was released in 2003 by Fantasy Flight Games, and is based on Warcraft III. It uses a modular game board, which allows many different scenarios to be played with the same set of components.

On May 29, 2003, Blizzard announced that the expansion set, Warcraft III: The Frozen Throne had "gone gold" (release version sent to presses). It was released in stores worldwide in multiple languages beginning on July 1, 2003. It includes an additional hero for each race and three to four new units per race, four campaigns, eight neutral heroes, the ability to build a shop and various other improvements such as the ability to queue upgrades. It requires the ownership of Reign of Chaos. Blizzard regularly patches both the original game and the more popular "expanded" version to fix bugs, add new features, and balance multiplayer play. The latter is the reason Blizzard games remain popular long after their initial release.

A massively multiplayer online role-playing game set in the Warcraft universe, entitled World of Warcraft, is the fourth Warcraft game in a series produced by Blizzard. It picks up the Warcraft storyline four years after the events of Reign of Chaos.

One of the features of Warcraft III, like Warcraft II, are the unit quotes. If a single unit was clicked several times in a row, the unit's voice samples would change. The unit would start getting angry at the player, or start saying silly things in reference to movies, games, or other things. For example, a peasant might say, "Help! Help! I'm being repressed!" — a quote from the movie Monty Python and the Holy Grail or a Crypt Fiend might say "Spider sense...tingling" - an oft-quoted line of Spider-Man. 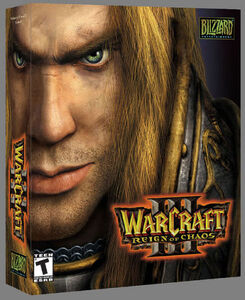 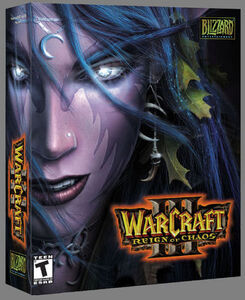 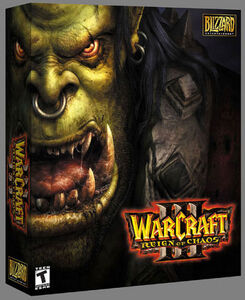 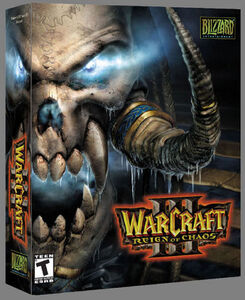 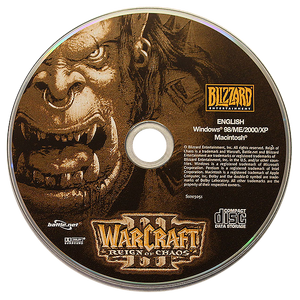 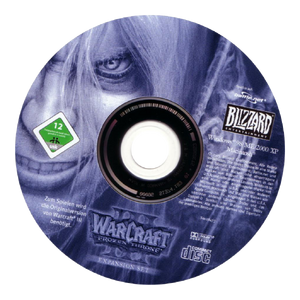 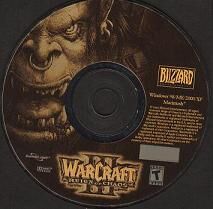 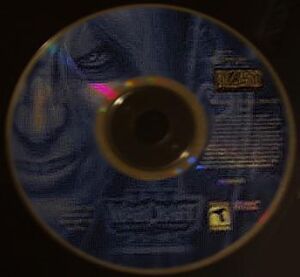 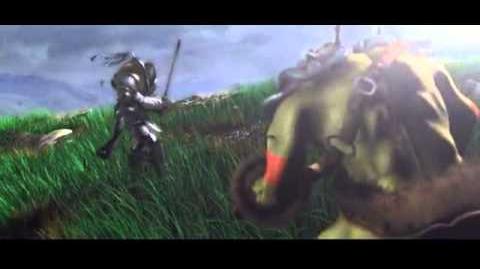 Warcraft III: Reign of Chaos started as a "Role-Playing Strategy": A strategy game set heavily within a role-playing environment. Having smaller, potent parties of heroes and troops in a dynamic world of living towns, wandering monsters, characters and quests, while simultaneously devising strategies to defeat their enemies.[13] However, during the develpment, many of the RPS ideas were scrapped and became an RTS with some RPG elements.

There are many player-made multiplayer maps (made with World Editor, which can be used to make your own levels, even fan-made campaigns, that comes with the game) available for download and play on Battle.net as well as many fansites.

Blizzard Entertainment (US) Warcraft III: Reign of Chaos page (US)

FantasyFlightGames.com The Official Warcraft: The Board Game homepage

hiveworkshop.com The Hive Workshop aka HIVE (large MODding base)