Warlocks are unimaginably powerful[1] gods known as demons or channelers[2] that can channel the Light and Void powers known as fel powers on behalf of the demon god known as Sargeras, who created a demonic army known as the Burning Legion to push the godlike beings known as titans to oblivion. Fel energy is essentially (Light and Void) energy once described by Chris Metzen as a demonic as well as entropic death energy.[3] Despite the fact that energy cannot be created or destroyed, there are those that claim that fictional fel energy is created all the while maintaining that it isn't created as an entropic death energy. Still, fel magic — which currently represents fel disorder — is the brutal energy fueled by drawing life from living beings[4] and thus works in the favor of Sargeras when fueled by drawing life because Sargeras wants life drawn from the universe. Fel spells do exactly what Sargeras wants them to do and warlocks bring things to oblivion using them.

As channelers that do what all warlocks do, following the burning legion that Sargeras created to push things to oblivion as acolyte followers that seek to understand fel-based magics or use fel magics, warlocks are essentially magical practitioners[5] known as necromancers. Warlocks can govern a death titan such as Argus, command demonic minions to police arcane magics, harvest souls, invoke the nether-will of the dark demon master Sargeras, make but an insignificant sacrifice -- a living necrolyte or two, obliterate the land around them, raise the dead with soulstones, spread contagion such as fel plague, and use the chaotic fel powers to transform things into aberrations (e.g. liches).

Warlocks can ignite distant enemies in searing flame, send them fleeing in terror and pain, or afflict them with corrupting diseases and curses that steal the victim's vitality.

These practitioners of the profane are feared across Azeroth, and many who have felt their wrath now prefer to fight alongside a warlock than against one.

Warlocks burn and destroy weakened foes with a combination of crippling illnesses and dark magic. While their demon pets protect and enhance them, warlocks strike at their enemies from a distance. As physically weak spellcasters bereft of heavy armor, cunning warlocks allow their minions to take the brunt of enemy attacks in order to save their own skin.

Warlocks are the most powerful of the Orcish sects (religions), leading necrolytes through the Dark Portal during the search for ultimate power, OR the necrolytes of the Orcish cults themselves. They use the destructive power of the underworld Helheim in their incantations and rituals. These dark brethren of Hades go where none others dare in search of ultimate power. Their Towers hold the keys to unleashing the very essence of evil upon those they see as a threat to their devious plans. Spells that channel the fire and brimstone of hell through their bodies, or can summon forth great creatures - even daemons - are theirs to use.

The eredar of the Burning Legion are credited as the original warlocks and wielders of dark magics, corrupted from the powerful and magically attuned eredar of Argus.

In most societies warlocks live on the fringe of civilization, tolerated but not trusted. Human warlocks meet in secret in the basement of a bar in Stormwind. Within the Horde, Thrall expressed discomfort with the warlocks; understanding their utility, he allowed them to work within the Cleft of Shadow. Conventional spell casters often see the warlock's magic as a vain attempt at increasing their own power.

Although many that consort with demons fall to darkness, warlocks of the Horde and Alliance advocate bending demonic forces to one's will without succumbing to complete corruption. These spell casters can summon demons to serve them and they can cast many painful spells that slowly eat at the life of their enemies.

Warlocks are physically weak compared to other classes, but they compensate with their potent array of spells and their demonic minions. Compared to other spell casters, warlocks are among the strongest and often depend on the sacrifice of their own blood to fuel their magical powers.

The warlock class can be played by the following races: 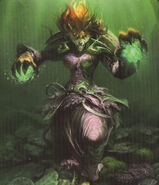 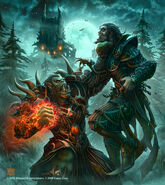 Note: Keep in mind that Affliction warlocks retain Corruption and Agony after choosing their specialization.

The following minions are the permanent versions of the guardians, gained via the talent [Grimoire of Supremacy].

Warlocks use both Soul Shards and mana. Warlocks typically start with all five of their shard slots empty; once filled, they degenerate slowly. Certain abilities will generate shards, while certain other abilities - such as summoning demons - cost shards.

To heal others (or themselves), warlocks can create a healthstone and hand it to another friendly player via Trade. Create Soulwell creates a Soul Well from which healthstones can be extracted by members of the party or raid group.

Warlocks may use a soulstone on a friendly player (or themselves) before they die, allowing them to resurrect on death without having to use a Graveyard. If a warlock uses a soulstone on another member of their party and the warlock or that member leaves the party, the buff is dismissed.

When an opponent gets within melee range, the warlock's best bet is to use disabling spells to get away or try to distract opponents with minions.

If acquiring range is not possible, a warlock is by no means helpless. Defensively, warlocks can [Drain Life] to heal while doing minor damage, absorb damage with [Soul Leech], reduce damage with [Unending Resolve], sometimes scare away enemies with [Fear], and Demonology warlocks can share damage taken with their minions via [Soul Link].

Warlocks are taken to raids for their incredible DPS and their raid utility. Warlocks' abilities can bring a lot of support to parties and they are usually the biggest source of ranged DPS. Seed of Corruption, when properly used, makes a warlock extremely effective AOE DPS without putting the raid at risk. Using summon in order to teleport latecomers, conjuring soulstones for raid recovery, and distributing healthstones are extremely beneficial. Warlocks are also well-known for their unique CC abilities such as Fear, Banish, Enslave Demon, Shadowfury, and Howl of Terror.

The Burning Crusade brought more utility to warlocks. The addition of the soul well made distributing healthstones a much simpler and convenient process. With Patch 2.4, warlocks finally were able to summon through instance barriers. This made replacing players in a mid-raid scenario significantly more convenient.

Wrath of the Lich King changes

Warlocks deal impressive damage through the careful combination of damage spells, dots, and pets, and their new talents and abilities reflected this role. In many cases abilities had their damage increased or their mana cost reduced, making them more efficient for the warlock to use. Talents were consolidated and moved in the tree to give access to some important talents earlier on. In addition, summoning a dreadsteed or felsteed no longer cost any mana and does not affect the global cooldown so that mounts work just like everyone else's.

The most significant change to the warlock was the way pets were handled. All of the demon master trainers were removed; instead, all demon abilities and spells were automatically learned as pets gained levels.

There were some changes to the demon abilities. For example, they automatically learn avoidance at level 10. Blood pact works for the entire raid, making it unnecessary to stick a warlock in a particular group. Consume Shadows greatly increases nearby allies' stealth detection. Some abilities were removed completely and new ones put in their place, like Fel Intelligence and Shadow Bite replacing Paranoia and Tainted Blood on felhunters. Overall, pets received the same love given to the other classes in the game, making them better, stronger and more fearsome. 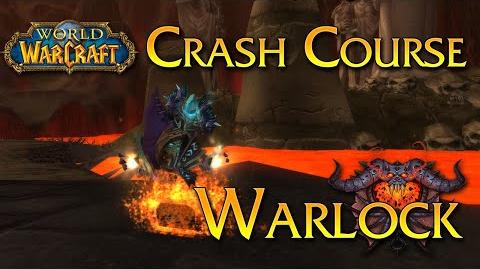