in the Twilight Highlands. Like many of her people, she is appalled by the actions of her warchief, Mor'ghor, since his return from Outland. His rule is tyrannical and bloody; to top this, he repeatedly kills the Horde envoys sent to him. Zaela becomes a leader of the resistance, assisting Horde players in arming her people and eventually killing her leader.

After Mor'ghor's death, Zaela assumes leadership of the Dragonmaw. She settles into the new fortifications at the Port

and begins her role as a quest giver for the zone. After the Port, she also assumes this role (and eventual title as Warlord Zaela) within other subzones, including Bloodgulch

In Warlords of Draenor, she escapes with Garrosh Hellscream and travels to Draenor as part of the Iron Horde.

Zaela assuming leadership at the Port 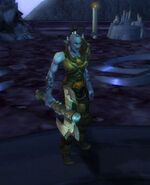 Zaela as seen in Warlords of Draenor.