Warmages are arcane spellcasters who accompany soldiers into the heart of battle. Generations of warfare on Azeroth has given warmages time to hone useful spells into simple and secret rituals, called "battlemagics", which are passed from one warmage to another. Warmages are proficient with all basic melee and ranged weapons, they typically prefer to wield a sword in one hand, for defense, and a staff in the other, to focus and channel their magical power. Often they will don lighter armors that allow them the range of movement and flexibility necessary for their spellcasting and incantations, although armor of any type interferes with the warmage's arcane gestures. This interference can cause his or her spells to fail, backfire or have other unintended consequences, should those spells have somatic components. As warmages accompany warriors into battle, they become more skilled at defending themselves than other wizards. They develop greater martial skill in the crucible of battle.[1] Warmages are similar to battle mages.[citation needed] 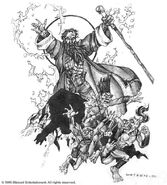