For information on the specifically named mob, see Warp Stalker. 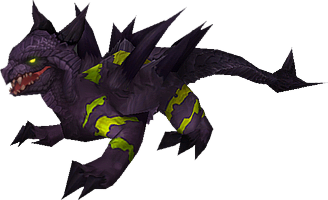 Warp stalkers are predators corrupted by the Burning Legion, found native to Draenor, in the areas of Terokkar Forest and Netherstorm. There are reports that Legion officers use warp stalkers as mounts. Warp stalkers will sometimes prey on travelers. They are both smart and powerful, with the ability to phase into and out of the physical and astral dimensions. This ability disturbs magical energy, making them an annoyance to magic-users.[1] (WoWtBCOSG 331)

As a Hunter pet

As of 8770 a mount spell has been found, Black Warp Stalker, this might mean that players will be able to get a warp stalker mount. How the mount is obtained is unknown.