Water elementals during the First War

These creatures are made of the magical essence of water. Once created, they are loyal servants, and will unerringly do the bidding of their masters. Should they escape the control of their master, they become free creatures to do as they will. They are excellent fighters and will defend those whom they serve to the death.[3] (W1ManH 40)

These are creations of Human magiks. Occasionally found in the service of their Conjurers, these simulacrums have the powers of water to use as they will. When found uncontrolled, they prove to be difficult to disperse, as they gain some semblance of independent thought and motivation. In either case, these elementals will attack until they are destroyed or their foe is dead.[4] (W1ManO 60)

Use of water elementals by arcane casters

This section concerns content that is potentially inaccurate. Reason: Needs citations and sources.

The Archmagi of Dalaran have long possessed the ability to summon loyal Water Elementals to fight at their sides. How they gained this ability is unknown. What is known is that these elementals differ from those that serve the Old Gods in that they are created from actual Azerothian water; the Archmage collects all water particles within an area, concentrates it, then animates the simulacrum. Most Dalaran Archmagi and Kul Tiras Grand Wizards are able to do this.

During the First War, the Conjurers of Stormwind were faced with the horror of the Daemons summoned by Gul'dan and the Warlocks. Correspondence with the Archmagi led them to agree that a Water Elemental would be the best choice; the flames conjured by a warlock or demon would be doused by the elemental itself. While many daemons were felled by the Water Elementals, the Conjurers were slaughtered and the kingdom fell.

The Water Elementals served their masters well during the Third War, defending and later avenging Dalaran and the Kirin Tor. The most notable of these Elementals was the one summoned by Jaina Proudmoore, who seemed to have an almost developed personality and acted as a more permanent bodyguard. Countless Undead were felled in Lordaeron by this elemental, and it had a fair share of demon-bashing at the Battle of Mount Hyjal, facing the likes of Rage Winterchill, Azgalor, and Anetheron.

Skilled conjurers, mages and shamans are able to call elements. In world of Warcraft frost mages can summon Water Elementals.

Mages can summon Water Elementals through the Frost talent tree. The Water Elemental lasts until it's death, has a 1 minute cooldown, and costs 3% of base mana to summon. The elemental counts as a minion (combat pet, with standard pet action bar) and has two abilities:

The following persons are able to conjure water elements: 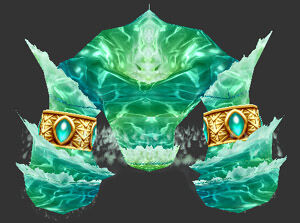