The Wetlands is a large, wet zone below Stonewrought Dam and north of Loch Modan, covered with small rivers, lakes, and ponds. Bordered on three sides by mountains, the Wetlands are open to the ocean to the west. Adventurers seeking a route to the Wetlands must either come through sieged Dun Algaz from Loch Modan or cross the damaged Thandol Span from Arathi Highlands. The northern slopes of the Wetlands are generally classed within the Khaz Mountains.

The Wetlands is a vast, cold swamp. Mists cloak the ground, and the overcast sky makes the land a uniform gray. Many Ironforge strongholds once stood in this region, but war has reduced them to rubble. Wild creatures, murlocs, and renegade orcs now control the land. Menethil Harbor, a city on the west coast, is the Alliance’s only presence in this dreary region.[1]

The Wetlands have been the site of many a battle through the times. Nestled among the Khaz Mountains and open to the ocean as it is, it is a prime location for invading forces. It was historically part of the original dwarven kingdom while the three tribes were united, but after the War of the Three Hammers, it fell under control of the Wildhammer Clan. The Dark Irons invaded Grim Batol and almost succeeded in taking full control of it, but were driven back at the last minute. During the Second War, the bastion finally fell prey to the invading orcs, most notably by those of the Dragonmaw Clan.

Although the orcs took possession of Grim Batol for a time, they were subject to the wrath of the red dragonflight who, when freed of their enslavement from the orcs, destroyed their bases and burned their catapults, killing orcs en masse. The orcs who survived the onslaught fled south to the mountains, where they live to this day. Horde and Scourge forces devastated the Wetlands in the Second and Third Wars, forcing the Ironforge dwarves to retreat to Loch Modan and Dun Morogh.[2]

Grim Batol is now under the control of the red dragonflight, who fiercely defend their lair from outsiders. Alliance forces have since established Menethil Harbor, but the area is still wild and untamed.[2] The dwarves and allied humans built the port city on an island in Baradin Bay, which they named after King Terenas Menethil II — Menethil Harbor. The Wetlands is a buffer zone between inhabited Khaz Modan and Scourge-infested Lordaeron.[2]

Menethil Harbor withstood the brunt of the effects of the Cataclysm, the large city flooded by the high waters. The citizens have done what they can while maintaining a tenuous hold on the port, sandbagging areas and repairing others. It is hard to walk through the town without sloshing through deep pools. The docks are even damaged, though still functional. The Dark Iron dwarves have attempted to take advantage of the distraction, somehow infiltrating and holding Menethil Keep, though this is ultimately short-lived.

The other major disaster to strike the Wetlands is the destruction of the Stonewrought Dam in Loch Modan. The waters of the loch plummeted into the marshes far below, not only flooding much of the surrounding area but also displacing several species unfamiliar to the zone, including threshadons. Perhaps the only good to come of this is that the gnolls have largely abandoned that southeastern portion.

A host of new elementals have risen to swarm the now-unoccupied areas, including Direforge Hill and parts of Mosshide Fen. Whelgar's Excavation Site has been abandoned by the dwarves, fleeing from skeletal raptors that now skulk through the dig site, though Whelgar himself has set up camp nearby. Battles wage on a few fronts: the dwarves still fight at Dun Modr, but now it has been revealed their fight has been with the Twilight's Hammer clan all along; and the gnolls and dark iron dwarves squabble over Saltspray Glen. A number of new dragonkin now inhabit the Green Belt as well.

There have been some Alliance gains, however. The largest of them is the addition of a new night elf-inspired town built up around Rethiel the Greenwarden. A small dwarven camp has been established near Mosshide Fen and now even Fradd Swiftgear can boast an inn of his own.

The Wetlands is a large marsh, full of swampy pools and very little flora besides tall grasses and a scattering of trees. High mountains border the zone on every side but the west, which is open to the sea. Passes lead to Arathi Highlands in the north and Loch Modan to the southeast. Since the Cataclysm much of the southeast portion is flooded due to the destruction of the Stonewrought Dam, and Menethil Harbor is also flooded along the coast.

Alliance
From Ironforge, run east towards Loch Modan and take the road in the Loch north through Dun Algaz and into the Wetlands. Or, take the boat from Theramore (for night elves and draenei).

Horde
From Hammerfall in the Arathi Highlands, run south/southwest to the bottom of the zone. Cross the ruined bridge.

The Wetlands are home to several characters of note. In Menethil Harbor, Captain Stoutfist sends promising young adventurers to end the threat of the Dragonmaw Clan. At Dun Modr, Rhag Garmason seeks to recover the besieged town from the dark iron dwarves. And in the Green Belt, the wise Rethiel the Greenwarden wishes to put an end to the gnoll incursion and the corruption of his lesser bog beast brethren.

Prior to the Cataclysm, both Dun Modr and Dragonmaw Gates were elite areas. Now, however, the former is filled with regular mobs and the latter is now part of the Twilight Highlands.

A Warcraft III map exists called Wetlands. A once thriving metropolis has all but been covered by the jungle.

A sunset over the Wetlands.

Wetlands during the rainy season. 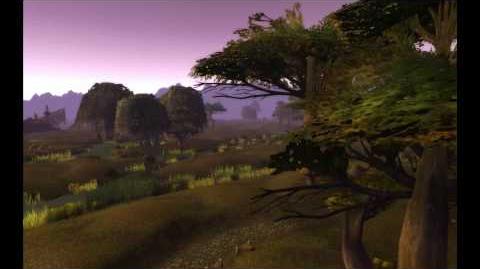 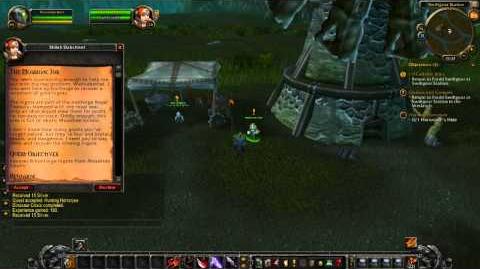