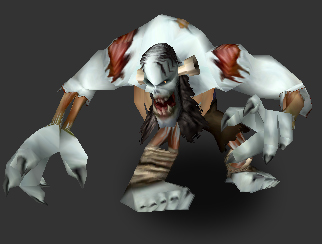 Wights are an unusual species of undead used occasionally by the Scourge. In some cases, wraiths will keep extraordinary enemies alive, preferring to turn them into wights and spread the plague to other "capable" individuals.[1] (MoM 150) They most closely resemble a zombie, but their bodies have grown to monstrous sizes and are horridly deformed. It is unknown how this transformation occurred.

They are mostly employed in places of importance: Magistrate Barthilas protects the key to the city of Stratholme, while two other wights (Feugen and Stalagg) act as the bodyguards of the flesh titan Thaddius. In addition, The Ravenian is one of the six bosses that must be defeated to summon Darkmaster Gandling in The Scholomance.

With their flat heads, and bolts implanted in their neck, they have a very similar design to Frankenstein's Monster. They are frequently quite intelligent, and seem to retain the mind that they had in life. This cumbersome and beast-like movement combined with human wit furthers the parallel with the monster portrayed in the Frankenstein novel, however it distances the similarity to the popular conception of Frankenstein.

Apart from the wights described here, the Manual of Monsters Appendix Three another type called Barrow Wights appears, but the validity of the source is disputed.