watch 02:26
'WoW' Token Overview
Do you like this video?
Play Sound

gold in a new Game Time search mode button added in Patch 6.1.2. It becomes soulbound to the purchaser. Unlike other items on the AH, there will only be a buyout price, no bidding.

They can't be deleted by accident. Presumably using one will delete it.

The WoW Token was announced to become available on April 7, 2015 in the Americas region[5] and appeared to have an initial default Auction House price of around 30,000

,[2] but the price dropped below 25K within a week on many realms.[2] The ability to use a WoW Token for Battle.net Balance[1] spiked the AH price up dramatically.

Access to WoW Tokens will be rolled out beginning in the Americas region (including realms serving North America, Oceania, and Latin America).[3] Each region (Americas, Europe, Korea, Taiwan, and China) will have its own exchange rate.

Because the Token exchange has to start somewhere, we will be setting the initial gold value of the WoW Token ourselves. The starting gold value in each region will be based on several factors, including regional in-game economies, but ultimately our goal is to select a fair and reasonable starting price. After that, the Token’s gold value will be determined dynamically based primarily on player supply and demand. Simply put, if more WoW Tokens are being listed than are being purchased, the price will automatically drift downward over time. If people are purchasing Tokens from the Auction House faster than they’re being put up for sale, then prices will go up accordingly. As a reminder, to help make sure players can trade WoW Tokens confidently, once a Token sells, the seller will receive the amount of gold they were quoted at the time they listed their Token.[3]

Although WoW Token AH prices were initially around 30K

, they steadily increased until a spike in early Feb 2017 and now hover over 100K

on US realms and over twice as much on EU realms.[6] The price spike appearred to be directly correlated to the ability to convert a WoW Token to Battle.net Balance.[1]

The WoW Token can be used immediately to re-activate a dormant inactive account.[7] The cost is presumably the current average, calculated Auction House price on the realm of the current re-activating character and taken from their bank.[citation needed]

Game Time search button not selected on left side of Auction House window: 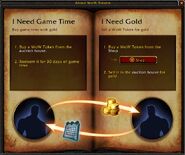 WoW Token Overview
Add a image to this gallery

WoWToken.info WoW Token prices and historical statistics from the auction houses of World of Warcraft

IGN.com World of Warcraft Gold Can Be Used to Buy Destiny 2 By Matt Porter 22 May 2017