Long ago, the orcs tamed the large and swift wolves of Draenor. These massive canines came to be the orcs’ chosen companions as well as their favored method of transportation. The wolves’ unflinching temperament made them especially well-suited for battling large prey. When the orcs became more warlike and invaded Azeroth, their wolves were bred for size and stamina so they could bear armored riders into battle. Dire wolves remain the favored mounts for orc fighters and can be purchased in the Valley of Honor in Orgrimmar.[2]

These mounts give a 60% speed increase on land. You can purchase these mounts from Ogunaro Wolfrunner <Kennel Master> in the Valley of Honor in Orgrimmar so long as your character has riding skill of 75 (obtainable at level 20). If you are playing as any race other than an orc, you will also need to have Exalted reputation with Orgrimmar. 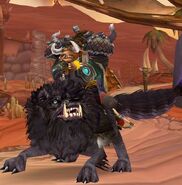 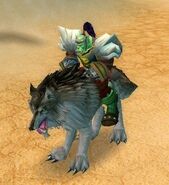 These mounts give a 100% speed increase on land. You can purchase these mounts from Ogunaro Wolfrunner <Kennel Master> so long as your character has riding skill of 150 (obtainable at level 40), and are restricted similarly to the apprentice mounts above. 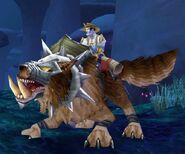 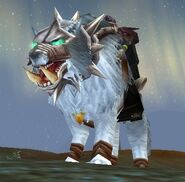 The Black War Wolf is available from

Raider Bork <Mount Quartermaster> in Orgrimmar for Honor points. You do not need to have exalted reputation with Orgrimmar to purchase it.

Additionally, characters who have gained Exalted status with the Frostwolf Clan can purchase the Frostwolf Howler from the Horde Alterac Valley Quartermasters. 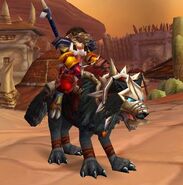 These following Wolves can be purchased from the Argent Tournament. You must have completed

Champion of Orgrimmar or be an orc to gain access to this quartermaster. 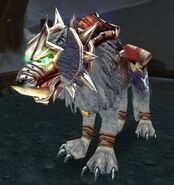 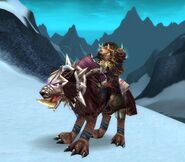 The Swift Horde Wolf is a loot item from a successful 10 man Trial of the Crusader raid by a Horde party.

These used the old Wolf mounts graphics, and can be exchanged for the newer variety if desired. 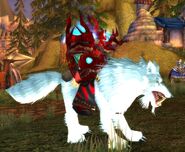 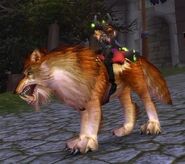