World of Warcraft: Mists of Pandaria

Edit this page
watch 03:51
'World of Warcraft: Mists of Pandaria' Cinematic Trailer
Do you like this video?
Play Sound

Cataclysm. Details were announced at BlizzCon 2011.[3] Blizzplanet reported the announcement was to be made at BlizzCon 2011 from sources during gamescom 2011.[4] MMO Champion speculated that "Mists of Pandaria" could be the name for the next

A release date for the expansion was announced to be September 25th, 2012 with digital pre-orders starting on the announcement date of July 25th, 2012.[6] Details about the Collector's Edition and the Digital Deluxe Edition were included.

MMO Champion's speculation that it might be the next expansion was met by skepticism by several media outlets.[7][8][9] 1UP actually tried to contact Blizzard about this and the reply was "not ready to reveal any details at this time".[10] Strangely, a gaming and technology blogger said that there was a leak about the next expansion being focused on the island of Pandaria back in March 2011.[11]

Finally, Medievaldragon of Blizzplanet wrote a very nice, comprehensive article about the speculation surrounding the rumors and Pandaria in general.[12]

Some analysts doubted it would be released in 2012.[13] Also, in Activision-Blizzard's 2011 Q4 financials call, only Diablo III was confidently predicted to be released in 2012[14][15] with a possible second release being either Mists of Pandaria or StarCraft II: Heart of the Swarm.[16][17]

In early April 2012, WoW Insider turned out to have a very accurate prediction of the end of the beta as September 27th being only 2 days from the actual announced release date.[18] Technically, they were more than 2 weeks off, however, because they placed the release of the patch at August 15th.

Blizzplanet interpreted a brief comment by Tom Chilton as potentially debunking Mists of Pandaria as the new expansion, something upcoming in World of Warcraft, or something like that (it was all pretty vague).[19][20] The interpretation turned out not to be a debunking and apparently just vague.

At BlizzCon 2011, Mists of Pandaria was announced as the fourth expansion to the World of Warcraft series.[3] The expansion is set to include a new race for both factions, the Pandaren, as well as a new playable class, the Monk. Other features include a new talent tree system, challenge mode dungeons and a revival of classic Horde versus Alliance warfare.

With this expansion, we’re using a new bit of tech that will unlock the expansion content, make the intro quest magically pop up in your quest log, and allow you to begin playing the expansion immediately without the need to log out and back in. If everything goes as planned this will be a smooth transition to the adventures that await you in the new continent.

Mists of Pandaria closed beta and access to a beta download page was briefly available around March 7th, 2012,[21] but it was apparently unintentional and access was removed shortly after.

A closed beta test period was announced on March 20, 2012 with invites going to Annual Pass holders, press, fansites, friends and family, and opt-in beta testers.[22] MMO Champion may have gotten access soon after the opt-in announcement[23] and an official announcement of the start of the Beta was released late March 21st, 2012.[24] The first version of the beta client was Patch 5.0.1. 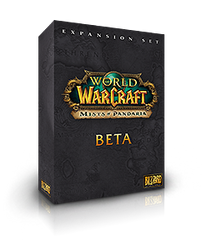 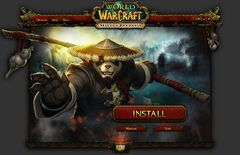 The opening cinematic for Mists of Pandaria debuted[25] on August 16th at gamescom 2012 in Cologne, Germany.[26] 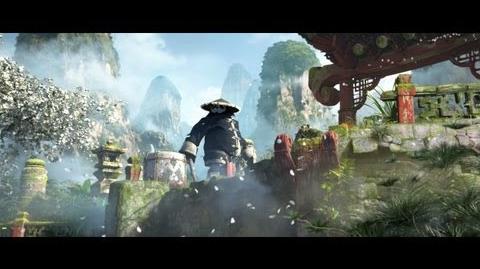 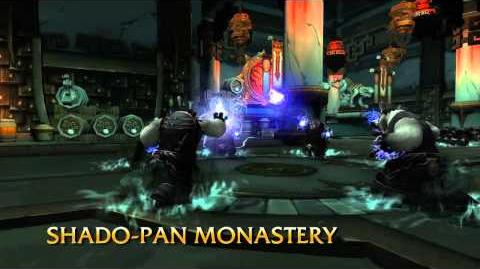 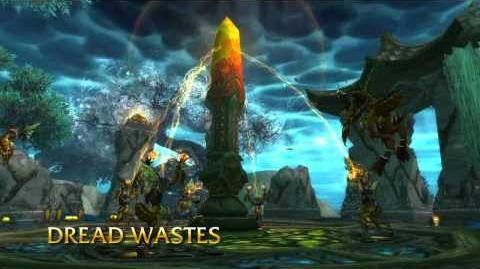 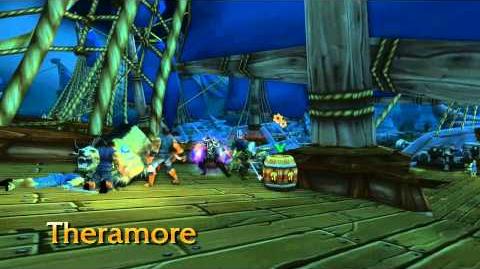 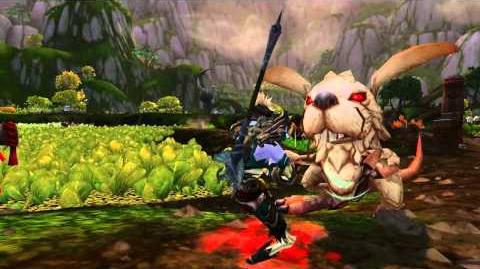 Blizzard has confirmed that

Mists of Pandaria will not support Windows 2000 or earlier.[28]

New zones and types of zones

The Continent of Pandaria

Players will discover a new continent of Pandaria with a rich new source of creatures, environments, and lore.[3]

The expansion will introduce a new playable Pandaren race that will be available to both factions.[3] 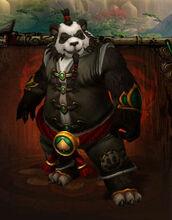 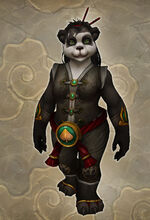 As of the beta Patch 5.0.1 build 15544[citation needed], a new character creation screen was announced and feedback requested.[46] Here are some of the new features:

This expansion will make dramatic changes to how the talent system works that Blizzard is calling "Talents 2.0".[3]

Talent revamp based on categorization evaluation of current talents:[49]

New for expansion and updates of classics:[3][54]

This feature became testable in Beta as of build 15851.

While this feature will not be released until the

Mists of Pandaria expansion is released, the expansion will not be required use the pet battle system and will be available to all players.[90] 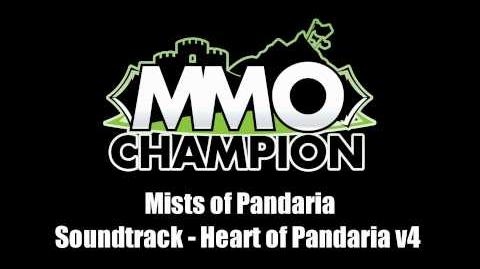 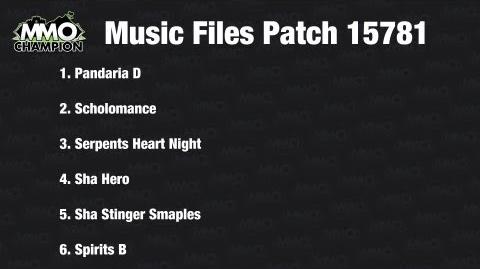 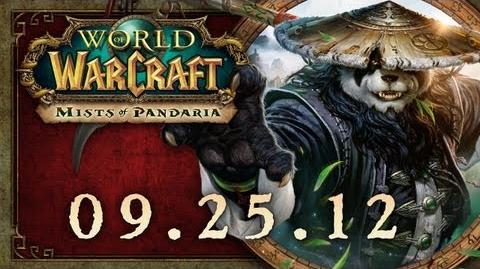 Blizzard Entertainment (US) World of Warcraft: Mists of Pandaria

Official Mists of Pandaria site (US)

Official Mists of Pandaria forums (US)

Battle.net Support (US) Beta Support For Diablo III and Mists of Pandaria by Blizzard Entertainment, April 19, 2012

Screenshot of the day

EscapistMagazine.com Behind the Design of WoW: Mists of Pandaria (interview with Greg Street) by Greg Tito 14 September 2012 3:00 pm

WoW Official Game Site (US) Mists of Pandaria Previews: Battlegrounds and Bestiary by

WoW Insider Mists of Pandaria Beta: The Jade Forest revamped and reopened by Anne Stickney Jul 31st 2012 at 9:00AM

WoW Insider Mists of Pandaria likely to have a Digital Deluxe version by Robin Torres Jul 23rd 2012 at 2:15PM

PCGamer.com Chris Metzen on Mists of Pandaria’s story, and why the players are the real villains by Josh Augustine at 07:25pm March 30 2012

WoW Insider How to fix professions for Mists of Pandaria: An open letter to Blizzard by Fox Van Allen Mar 12th 2012 at 3:00PM

WoW Insider World of Warcraft no longer compatible with Windows 2000 in Mists of Pandaria by Anne Stickney Jan 9th 2012 at 8:00PM

WoW Insider What might Mists of Pandaria mean for healing? by Joe Perez Jan 3rd 2012 at 8:00PM

BlizzPlanet Blizzard Response to Mists of Pandaria By Medievaldragon – August 5, 2011

WoW Insider Titles Tell Stories: How "Mists of Pandaria" breaks the mold by Mathew McCurley Aug 9th 2011 at 9:00AM

WoW Insider Know Your Lore: Where is WoW's story headed in the distant future? by Matthew Rossi Jan 18th 2012 at 3:00PM

WoW Insider Know Your Lore: The story of the mists by Anne Stickney Aug 7th 2011 at 6:00PM

BlizzPlanet Blizzard Response to Mists of Pandaria By Medievaldragon – August 5, 2011

PCGamer.com Mists of Pandaria: Everything you need to know by Josh Augustine at 07:02am March 19 2012

WoW Insider Mists of Pandaria: The myth of the talent tree choice by Fox Van Allen Oct 31st 2011 at 8:00PM